Travelling to Satna was a journey that I'll never forget. I arrived at the Varanasi Railway Station and didn't realise that I couldn't buy a reserved ticket for travel on the same day. So, I had to buy an unreserved ticket which is cattle class in the true sense of the word. I don't mean I had to travel with the beasts; I simply mean we were crowded into carriages like cattle. I honestly felt that it was below a standard that humans should be expected to travel.

I'll try to give you an idea. Every seat which comfortably accommodates three people had four or even five in it. When I first boarded I had no idea where to sit or stand. Through the kindness of a few people I managed to get my bag onto the luggage rack and about half a seat. So while I was perched on the end of this seat I wondered how I'd be after eight hours and optimistically hoped that the train may begin to empty a little as we progressed through the various cities. 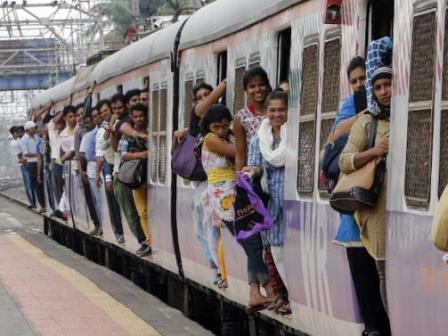 Unreserved class on an Indian train

Empty! What was I thinking? I was on a train going to Bombay. It began to fill even more! There were people sitting on the floor, lying under the seats, hanging out the doors and even a few up on the luggage rack. It was undignified and like nothing I've experienced before. To make it worse the journey was painfully slow. Several times the train would just grind to a halt and sit there for no apparent reason. It was late leaving and the delays just added to my frustration. I should have arrived at 8pm but at that time we still had about three hours to go!

All I wanted to do was get to Satna and find a hotel to sleep. But instead I was stuck like a sardine in a tin of Indian humanity. It wasn't fun but a snake charmer getting on at one station and doing his thing did ease the misery a little. I had admiration for the endurance of the little group I was sitting with. They boarded the train somewhere near the Nepalese border and were travelling all the way to Bombay. 1,800km...seriously folks, I couldn't do it!

Another reason I couldn't wait to get off the train was I felt like I was in a goldfish bowl. It's an accepted part of the culture here to stare at someone if you find some fascination with them. I seemed to be the only tourist on the whole train so for twelve hours this is what people did. At one station a guy started chatting to me on the platform and within minutes there were about twenty people around us watching and listening to me. Normally I wouldn't mind but I just wasn't in the mood for all the attention so I asked them all what they wanted. There were some embarrassed looks and the group dispersed but it quickly grew again as we resumed our conversation. Sometimes you just can't win… 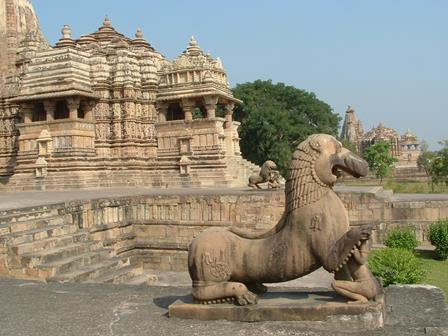 There are various theories about the sexual themes. One explanation is that they are tantric images and used to blot out the evils of the world and help in the quest for nirvana. Rather more convincing though is that the sculptors were simply representing life as it was viewed by their society and the carvings should be seen as a joyous celebration of its many aspects. Whatever the reason, they are one of India's major attractions and the very detailed, artistic and beautiful stonework makes it easy to see why.

← Varanasi and Orchha → Palaces and Temples