When I last wrote I was in the little village of Orchha. From there I've had a few exhausting days travel to get where I am. I've come to the conclusion that regardless of how or where you travel it's likely to be crowded and less than comfortable. It seems inevitable that there will be more bodies than seats and the whole thing only works because the Indians have a totally different concept of the term 'personal space'. In fact, let's be quite honest...the term simply doesn't exist here! What's mine is yours and let's all share together...

My first destination was the village of Sanchi. Using four different modes of transport and all day I successfully travelled the 250km. Sanchi is at the foot of a hill that has various Buddhist stupas (shrines) on the top. It's a remarkable story of history, discovery and restoration. They date back as far as the third century BC but as Buddhism was absorbed into the Hindu religion the site decayed and was eventually forgotten. It was only in 1818 that it was rediscovered and it took another 100 years after that for the repair and restoration to be completed. 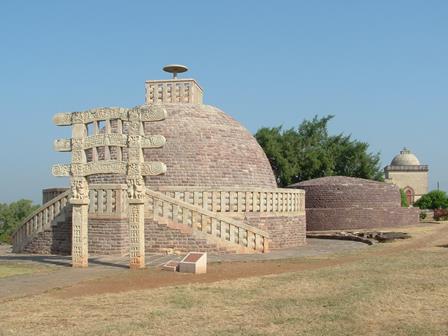 I also hired a bike there and took a 20km ride out to some Hindu and Jain caves. It was a fun experience riding one of the big single gear machines they have here. They are fine along the smooth, level roads but it quickly becomes hard work when it's bumpy or uphill. I began to wish I had my mountain bike then!

From Sanchi I had an exhausting day to get to Mandu. I thought perhaps I'd only make it to Indore but after four buses and twelve hours I made it. The road from Indore was dreadful in some places - pot holes like you wouldn't believe. So the 93km took the best part of four hours. If you do the mathematics on some of these journeys you begin to realise how agonisingly slow they are! I honestly thought that because Mandu is a tourist destination the road would be okay but it was dreadful. 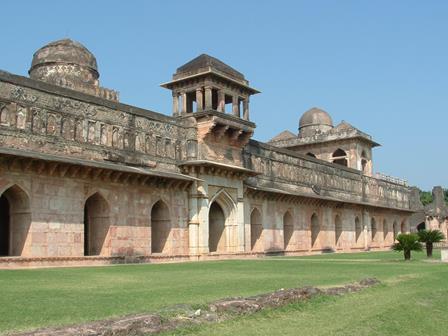 Mandu has a long and varied history and was once the capital of the region. It's now a small village surrounded by a fort, palaces, mosque, tomb and temples. It was a fascinating place to visit and I had a big day visiting all the sites. A highlight was the Jama Masjid mosque built in 1454 which is supposed to be the finest and largest example of Afghan architecture in India. Immediately adjacent is Hosang's Tomb (1435), which is reputed to be the oldest marble building in India and provided inspiration for the Taj Mahal. I loved the Jahaz Mahal or Ship Palace so called because its 120m long by only 15m wide and flanked by two lakes.

I was dreading the return bus trip to Indore and it lived up to all my miserable expectations. Unfortunately I got on a bus that seemed to go even further off the beaten track and cramming even more people aboard than I've come to expect. With someone almost sitting on my leg and my face pressed against the window you wonder just why you're doing it... Finally after almost five hours (yes, five) we arrived and I had to figure out how I would get to my destination of Jalgaon. The train didn't leave for 3 hours so I caught another bus that got me to Khandwa. From there I got an 'express' train that arrived at 8.30pm...13 hours of exhausting travel. 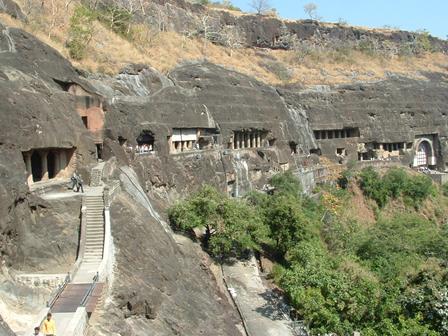 The next couple of days were spent at the Ajanta and Ellora Caves. From Jalgaon, I had a comfortable day to Ajanta and then on to Aurangabad. The caves at Ajanta are another extraordinary story of history and rediscovery. They are all Buddhist temples that date from around 200 BC to 650 AD. But like Sanchi, as Buddhism declined they were abandoned and gradually forgotten. It was a British hunting party that stumbled across them in 1819 and their remote beauty was once again unveiled.

Altogether there are 29 caves cut into the rock at a horseshoe shaped gorge. Each of them is slightly different but all are characterised by wonderful stone carvings and fresco paintings. Obviously after so many years the paintings have deteriorated a lot but significant restoration work in the 1920's has meant they have been carefully preserved since then. Every cave has at least one Buddha sitting serenely with his legs crossed. You would think he'd have to be a little uncomfortable in that pose after hundreds of years! 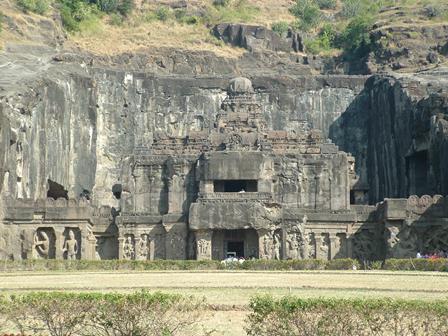 The caves at Ellora were different in that they contain Buddist, Hindu and Jain temples. It was interesting to make comparisons between the three groups. While the Buddhist caves offered a sense of calm and contemplation there was more drama and energy associated with the Hindu carvings. The Jain caves were different again in that they didn't have the same size but had some very fine and detailed carving work.

But the jewel in this particular crown is undoubtedly the Kailasa Temple. This must surely be one of the most amazing architectural feats ever completed. This huge temple was literally created by cutting three huge trenches into the rock and 'releasing' its shape using hammers and chisels. 7,000 labourers worked for 150 years to create what is the world's largest monolithic sculpture. It covers twice the area of the Parthenon in Athens and entailed removing about 200,000 tonnes of rock! It basically consists of a huge courtyard from which the main temple arises and is joined to the outer enclosure by a bridge. All around the structure are finely carved panels that combine to create something that is simply extraordinary.

← Satna and Khajuraho → Mumbai and Ahmedabad