Greetings from the holiest city in India - Varanasi. I arrived here early last night after a big couple of days bus travel from Pokhara. The first day to Sounali took about 8 hours and yesterday was a gruelling twelve-hour endurance test to get here.

I travelled the first leg with a few girls who were doing the whole journey non-stop. Perhaps I'm getting old or something but I couldn't do it. I decided that making a break on the border and leaving again in the morning was a better idea. Sounali is an odd little place which I don't have much fondness for but it makes an ideal place just to stay over. It's a dusty town literally caught between two worlds and doesn't have anything like the charm of a place like Pokhara. 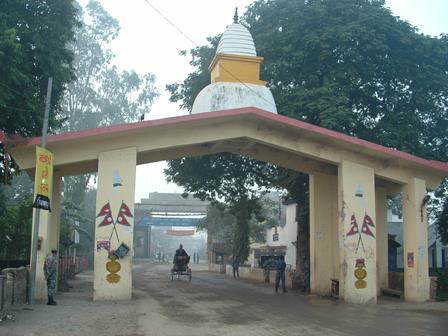 Yesterday, after I'd negotiated the two immigration control points I picked up the 7am bus bound for Varanasi. Any thoughts that an Indian 'government' bus may be more comfortable than the one I'd just travelled on were dispelled immediately. It was worse! This was a noisy old boneshaker that I was destined to spend a long time in. The distance we travelled wasn't huge but it was painfully slow. We probably averaged about 45kmh as we rattled along toward our destination. I decided to sit up the front - partly because the view was more interesting but also because it wasn't so bumpy.

The only problem with that was I was much closer to the incredibly loud horn that the driver had no hesitation in using very liberally. I quickly decided that earplugs would make that aspect of my journey more comfortable but it didn't help my bum which was getting increasingly sore. Eventually I had to sit on my sweater to create some extra padding because a thin layer of foam rubber over wood doesn't quite do it after a few hours. Along the way we hit a dog and had a near miss with a baby monkey. It was a terrible journey and when we arrived I actually felt more sorry for the driver than myself. That was a very long day in the saddle! 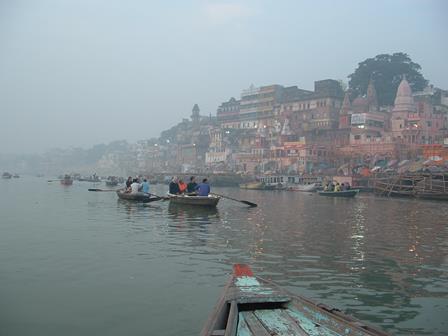 This morning I went down early to the River Ganges to experience what this city is about. It was an extraordinary sight watching the locals bathing in this filthy river but they have no problem with it. All along the bank of the river are ghats, which are bathing houses. Several of which are 'burning ghats', which are used for cremation ceremonies. For the Indians it's considered the best possible place to depart earth and I watched one of these ceremonies as it took place.

I did a little tour there that included an early morning boat trip on the River Ganges. Dawn is when most of the local people come down to the river to bathe and pray. It was also the best way to view the ghats. So, there was plenty to see both along the banks and also in the dozens of other boats being rowed along the river. The majority of them were tourists but the locals continued their morning rituals seemingly oblivious to all the attention. 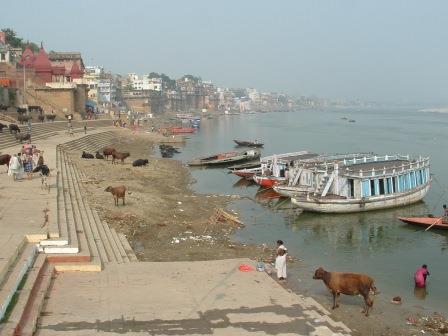 Daily life on the Ganges River

It amazed me that people could use this water to wash themselves and their laundry. I'm not certain about human bodies being in the river (I was told by another traveller that she saw a corpse while doing her boat trip) but our boat did pass the rotting carcass of a cow. Either way, the ashes from cremations were all put in the river and it's just disgustingly polluted. But it was a very interesting city to visit and I enjoyed my few days there.

When travelling in India your business is very rarely your own. Indians have an incredible natural curiosity and want to know where you're from, where you're going and how long you are going to take doing it. This is often combined with a strong desire to sell you something. So, in Varanasi I bought a t-shirt that reads:
NO Money Change
NO Hashish
NO Boat
NO Silk
NO Rickshaw
NO PROBLEM!
I could even add a few more to it….no shave, haircut, massage and no useless souvenirs. Probably the best $1.20 I'll ever spend in Inida! 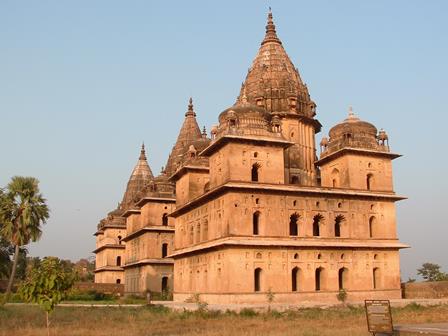 Onward to the town of Orchha, which is just south of Jhansi. Once a capital city, it's now a town set among the palaces and temples from its history. Its golden age was the 17th century so most of the historical sites are from this era. The most impressive of these is Jehangir Mahal palace which is a complex building with many rooms, hallways and levels. It looks 400 years old in many ways but the small parts of marble remaining are a glimpse of how glorious it looked when it was first built.

There is another palace and couple of temples which I visited. While I was happily watching the sunset from the upper level of the Ram Raja Temple I didn't realise that the attendant was happily closing and padlocking the huge wooden doors downstairs. So, when I came to leave I was trapped inside! After some searching around I found a place where I had to hang by my fingernails and drop onto a ledge before being able to access some steps. They led to the bottom of a wall that I had to climb over to eventually get out!