My time in Western Australia was almost up but there was a final item on the bucket list that hadn’t yet been ticked off: Rottnest Island which lies about 19km off the coast from Fremantle. It’s a popular weekend escape for Perth families and it’s easy to see why. Cars are prohibited and the sandy island is fringed with secluded beaches and bays. There is also the wildlife of fur seals, sea birds and native quokkas. Yes, ‘Rotto’ as it’s known to the locals is a great place!

The ferry arrives at the marina in Thompson Bay on the eastern end of the island. Rottnest is relatively small - about 11km long and 5km at its widest point. My plan was to hike the cycle pathways around the southern coast to camp the night at Eagle Bay on the western peninsula. In the morning I’d return via the string of little sandy bays and rocky inlets along the northern coast. Inland there’d be unique landscapes and historic sites to enjoy along the way. 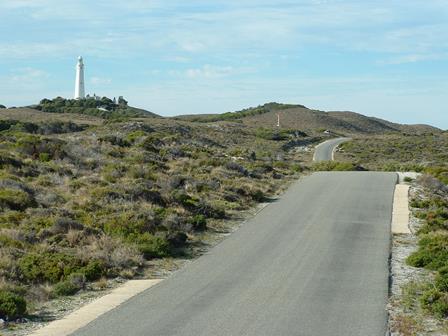 Rottnest Island has an interesting history and was used as an Aboriginal prison from 1838. An octagonal building built in 1864 was once part of the prison block but now forms part of a hotel. In a wooded area nearby there are hundreds of prisoners buried in unmarked graves. In a 19th century building around the corner is a photo exhibition that focuses on another chapter of local history: between 1838 and 1950 the island’s salt lakes provided all of Western Australia’s salt.

Pink algae around the salt lakes

Just out of the Thompson Bay settlement I visited the old Army Barracks. Rottnest Island was used as a strategic defensive post to protect the Port of Fremantle during World War II. A few kilometres further along the coastline, I stopped to do some snorkelling in the clear, sheltered waters of Salmon Bay. In the middle of the island I detoured inland and walked up to the lighthouse on Wadjemup Hill. Being the highest point of the island, I was rewarded with nice views in all directions.

While having lunch, I met one of the friendly resident quokkas. These small marsupials were originally mistaken for rodents and that's how the island was named. (Rottnest is Dutch for 'rats nest') Anyway, these adorable little creatures were mostly quite tame and were happy to come right up to me. They were mostly found around the populated areas but there was evidence of them all over the island. I found this to be (forgive me...) 'a quokk-a shit'. 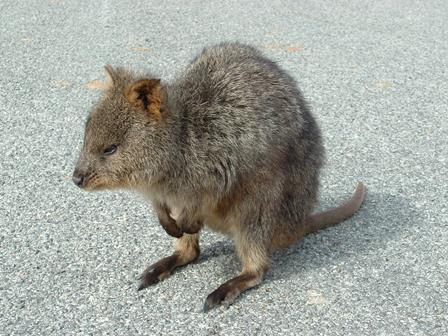 A tame and very cute quokka

After a beautiful sunset and night on the beach, I realised I had a problem in the morning. I had a long hike back and virtually no water. I didn’t stop to remember that the island is ‘dry’ with no streams, rivers or lakes. I was surrounded by water everywhere but couldn’t drink any of it. I suddenly had to put myself on very strict rations until I found a water fountain somewhere.

The snorkelling on the north coast of the island wasn't as good as Salmon Bay and the best part of the day was hiking up to the historic gun battery on Oliver Hill. This 9.2 inch canon had the capacity to fire armour piercing shells up to 28km but was never required during the war. The top of the hill provided interesting views of the saline lakes that fill some of the island’s interior. It’s both a unique and pretty landscape that contrasts from the rocky coastline. 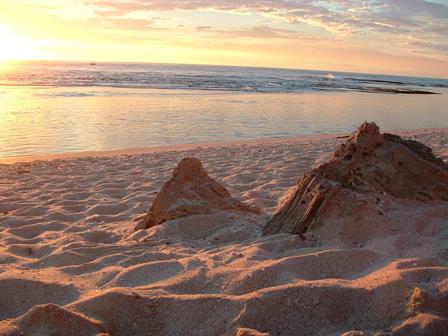 Sunset at my campsite on Cape Vlamingh

I was relieved to find water on the road around one of the northern bays and by mid afternoon I was back on the northeast point of the island. I had an hour to spare before my ferry departed for Perth so I visited Bathurst Lighthouse which was built after a ship wrecked off the coast. Over the years, more than a dozen boats have been wrecked on the reefs of Rottnest Island. While hiking around the island I found several marker plaques that tell the tales of how and when the ships sank.

‘Rotto’ was a great way to finish the western part of my Australian journey. Within a few days, I’d be heading across the vast expanses of the country to the South Australian capital of Adelaide and is if to complete the circle, eventually to back to the east coast of Queensland.

← Cape to Cape → Across the Nullarbor