My road trip from Perth to Adelaide was somewhat bizarre in that three of us departed and only two arrived. There was no tragic accident or out of control argument and no-one was murdered. It was basically a lack of communication that led to weird misunderstanding. It’s funny the way it goes sometimes...

The car belonged to Jamie and we wanted to enjoy the journey as much as the destination. But our other travel buddy Lou was only focused in Adelaide and seemed in a big hurry to get there. He was a nice guy but wasn’t interested in the stark beauty of the southern outback that we’d pass through along the way. He occupied the back seat either sleeping or reading his book. 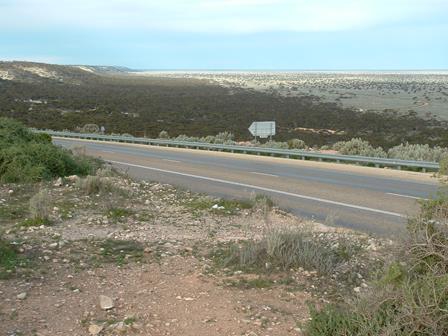 After a long day on the arrived we arrived in the brash mining town of Kalgoorlie-Boulder. It was dusk but I could sense Lou was agitated when we decided to stay for the night. If it was up to him we’d be driving in three shifts, day and night. I dared not suggest that we play the world’s longest golf course on our way east. The extraordinary Nullarbor Links stretches 1,362km south to Norseman and all the way across to the town of Ceduna in South Australia. The holes are scattered along the route and the only water hazard is the risk of running out of it!

That would have been a lot of fun but no, it wasn’t going to be that kind of trip. We were up early the next morning and on the road to the crossroads township of Norseman. It was here we began the long haul east across the mighty Nullarbor Plain. This is one of the iconic Australian road trips where you simply sit back, relax and enjoy the big empty skies and long horizons. This truly is about the journey as much as the destination. 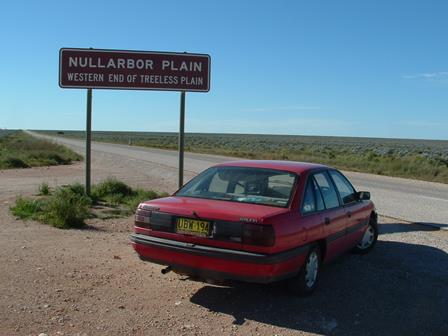 Edge of the Nullarbor Plain

Translated, the word ‘Nullarbor’ means treeless and that’s exactly what the plain is. The mighty Eyre Highway runs parallel with the Trans-Australia Railway line across the southern edge of the Nullarbor Plain. It includes Australia’s longest stretch of dead straight road - 145km, the so called Ninety Mile Straight. The plain is low shrubs and tussock grass for as far as the eye can see. It’s as vast as the outback but greener and prettier. There are roadside campsites every 250km but we pushed on to Border Town, so called for obvious reasons.

The following day we’d set our watches forward 90 minutes and enter South Australia. But Lou’s discontent over our lack of progress grew to genuine anxiety and the reason emerged. Apparently he had to be in Adelaide by the following afternoon for a flight to Sydney! I don’t know what he was thinking not speaking up or travelling with us at all. The 2,700km journey across the country is similar to going from London to Moscow! 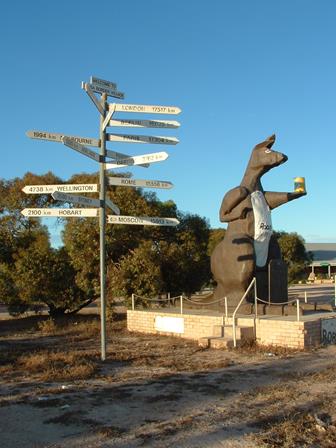 Did he really imagine that it would only take a couple of days? We were a little bewildered by his lack of planning and awareness. Maybe he was too shy or embarrassed to speak up earlier and I felt bad that we’d held him up. There were no hard feelings though. He apologised for causing problems, left us some money for fuel and jumped on a truck that night heading for Port Augusta. I wished him luck and had my fingers crossed he’d make it.

And then there were two. We still had some 1,300km to travel but our initial stop would be the Great Australian Bight. The marine park here is the second largest in the world after the Great Barrier Reef and is home to migratory whales from July to August. Although it was too early for whale watching it was worth stopping just for the great views of the Southern Ocean, sand dunes and the towering Bunda Cliffs. We then pushed on to the raggedy fishing town of Ceduna which in the local Aboriginal language means ‘a place to sit down and rest’. 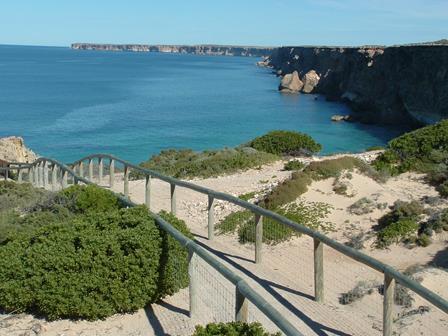 We did exactly that for a while before pushing on to Port Augusta which on the map at least, appears to be at the biggest crossroad in Australia. From this town at the head of the Spencer Gulf, you can treat it as the gateway to the vast outback, Flinders Ranges or Eyre Peninsula. Highways and railways roll out toward Kalgoorlie in the west, Alice Springs and Darwin in the north, Sydney and Melbourne in the east and our destination of Adelaide in the south. Not a bad position! 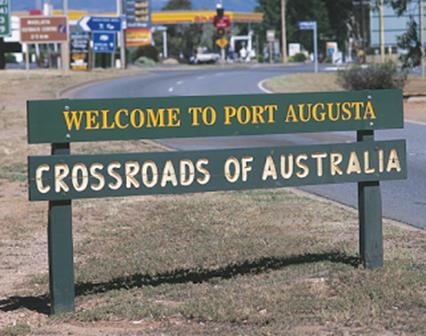 As we passed various road signs I thought for a moment about Lou trying to catch a final ride to catch his flight. I’ll never know but I somehow doubted that he made it. We stayed a final night in Port Augusta and took a walk around the old town centre the next morning. It has some elegant buildings and a pleasant waterfront where some locals were fishing. From there, it was just a four hour drive to the South Australia state capital. It had been a strange trip but I’d made it and ‘all’s well that ends well’ as they say.