Our travelling group was abbreviated to just three while we were in Alice Springs. One was returning home to New Zealand and another couple were going south to Adelaide. So together with the Irish girls Denise and Bridget, we took on another campervan relocation adventure. This time it was a 4WD with a tent on the roof that popped up. There was also another tent for the ground and all the camping equipment that we could ever need, including a fridge and cooker. 1,500km to be done in three and a half days. 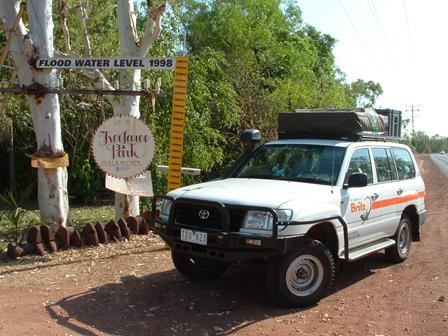 Our first night was 400km north at the Devils Marbles. The 'campsite' was the dusty earth of the car park. No green grass here but plenty of the large and incredibly annoying outback flies. The only relief was sunset when they’d disappear but be replaced by mosquitoes. Never mind the dingos and snakes that were probably lurking out there. Oh the joys of wilderness Australia! Still, the mighty sandstone boulders are more impressive at sunset so I was happy to be there for that.

It was a restless night. A breeze came up and we spent more time listening to the tent flapping than actually sleeping. Amid an onslaught of flies, we quickly dismantled camp and got on the road the next morning. We stopped in Tennant Creek for breakfast and decided to use the toilet a local campground. This turned out to be a bad idea because when the manager found us he demanded that we pay $10 or else he’d call the police and have us arrested for trespassing. 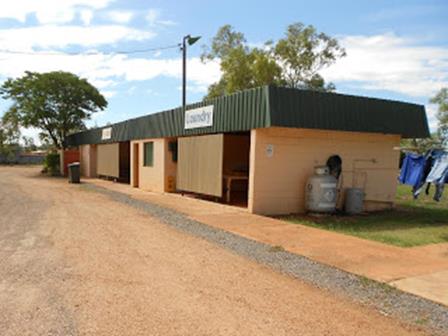 After an argument we declined to pay and got back into our vehicle. I thought that was the end of the matter until I saw in the rear view mirror the manager’s car looming large behind us. He began to chase us around the streets until I realised that perhaps the heat and flies had really gotten to this guy! I pulled over near the police station and pushed some money through a window I was too afraid to fully open. After receiving the money, he ranted angrily at us before going into the police station to report us anyway!

We had to follow him in to sort things out before finally getting on our way again. The local officer told us before we left that he has wasted their time before and almost apologised for his erratic behaviour! All’s well that ends well as they say.

As we travelled north up the Stuart Highway, I noticed a sign indicating that we were about to cross 'Tomlinson Creek'. When I got out for a look I realised how hot it was outside. Although it was only September the temperature must have been close to 40C. The poor creek had nothing flowing in it so I did my little bit to help. We were grateful to finally make camp that evening at a nice little place called Dunmarrar. Here we had grass to camp on and there was even a swimming pool. 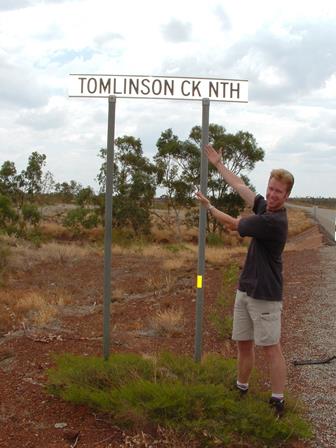 Not far north and a few kilometres off the highway is Daly Waters, population 25. This little dot on the map has an interesting history as an important staging post in the early days of aviation. Nowadays it is famous for its pub that just about everyone stops at. Its liquor licence dates back to 1893 making it the oldest pub in the Territory. Decorated with business cards, banknotes, bras and other memorabilia left by travellers, it made a great place to break the journey with a beer and a laugh. 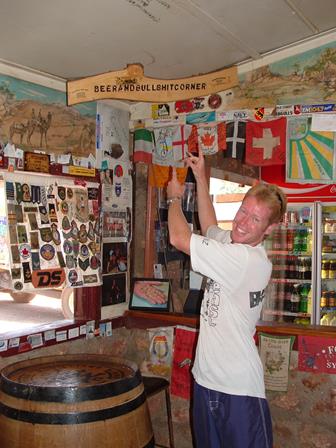 Our final night was spent at Katherine Gorge in the Nitmiluk National Park. It's a beautiful area and I'd love to have spent another day there. We arrived about 5pm so just had time to walk up the gorge, get a few photos and have a swim in the Katherine River. While swimming alone in the middle of this river at dusk it suddenly occurred to me that crocodiles may be lurking in the dark waters. I quickly retreated back to the safety of the river bank!

Our last day included a stop at the Edith Falls in a different part of the park. I did a petty 45 minute walk and had a quick swim. We had to have the camper back by 3pm and when we got to Adelaide River I realised we had just 85 mins to drive 120km! We were told that even one minute late would cost us $300! So, the last leg of the journey became a rather mad dash and I was grateful for the absence of a speed limit in the Northern Territory. 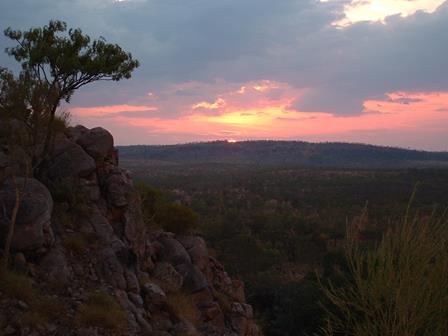 We drove into Darwin at 2.45pm but we still hadn’t made it. We had to refuel the vehicle like a race pit stop and then locate the rental car office without the aid of a GPS. As we drove in the gate I glanced at the clock on the dashboard that read 2.58pm. We’d made it! It probably wasn’t a great way to arrive in a city that is renowned for its relaxed vibe but we were there on time, in one piece and very happy.