Nearly 150 years ago Alice Springs was merely a lonely telegraph station located on the Stuart Highway approximately halfway between Adelaide and Darwin. Until 1933, its name was actually Stuart but it was changed to avoid confusion with the town of Sturt in South Australia. Although it is still surrounded by red desert sand and rugged mountain ranges, it has developed from a frontier town into a modern regional centre. I’d always dreamed of coming here to not only explore the surrounding area but learn more about the Aboriginal culture. I loved my time here. 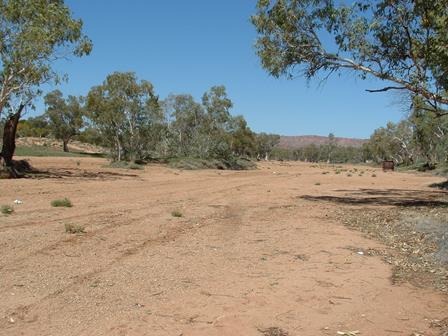 The city is built around the Todd River but for most of the year it's just a huge bed of dry dusty sand that awaits the drought breaking rain. Beside the river is one of the most interesting places - the old telegraph station. Along the Stuart Highway are various reminders of the telegraph line that once linked Adelaide to Darwin and then to England via a submarine cable. The whole project was completed in 1872 and was an amazing feat for that era. Alice Springs was a vital point in the line and the original station is now a museum. 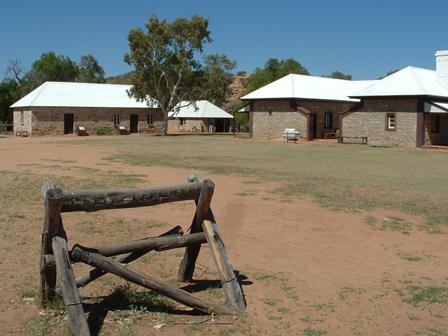 I visited the Royal Flying Doctor museum and communication base. The Flying Doctor was the vision of a man called John Flynn. In the 1930's he wanted to develop a 'mantle of safety' for people living in remote outback locations and recognised that the plane was the only genuine way to make this a reality. The first flight was actually made from Cloncurry in Queensland but Alice Springs is a very important location in the modern service.

It was interesting to see how it has developed from that first flight in a plane that had no radio communication and very limited medical supplies. Thanks to technology and a lot of hard work, it's now an operation involving 45 aircraft flying from 23 bases around the country and employing more than 600 people in various capacities. Altogether, these dedicated health workers provide 24-hour emergency medical service to an area of about 1.25 million square kilometres. 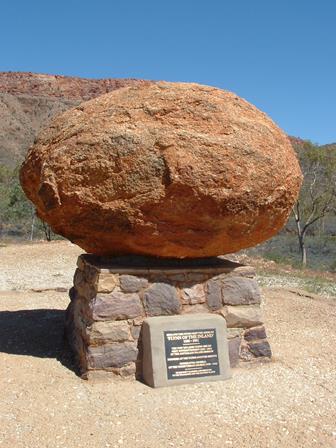 I enjoyed my visit to the Olive Pink Botanical Garden which was named after a prominent anthropologist. The gardens are a network of meandering trails that lead through a lovely display of plants and trees that grow in arid zones. It contains over 500 central Australian plant species including bush food and medicinal plants. At the end of the day I did the gentle climb up Meyers Hill to watch the sun set over the city. The other good city viewpoint is across the riverbed at the top of Anzac Hill.

On my final day I hired a bike and did the ride out to a place called Simpsons Gap in the MacDonnell Ranges National Park. Most of the 25km is on a beautiful smooth cycle track through a harsh but very beautiful landscape. Simpsons Gap itself is where millions of years of erosion and weathering have created a gap in the quartz rock. It was difficult to imagine how any erosion could possibly happen while I was standing on a bed of sand! Still, it’s an area of stunning beauty I was lucky enough to see a few little rock wallabies while I was there. 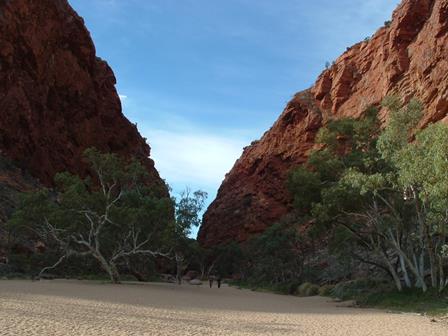 Being September, we were fortunate to be in Alice Springs while the annual Desert Festival was on. It started with a street parade and free concert down beside the river. For the next 12 days there were various events such as art/craft displays and workshops, concerts, story telling, dance and theatre etc. I could easily have stayed a bit longer but the road was calling my name again and this time we’d be heading north to Darwin.

← Uluru and The Olgas → Northern Territory