I wasn’t quite sure what to expect from Darwin but I was excited to arrive. Having recently been in the southern extremes of Tasmania, I was now in the ‘Top End’ of the country. It’s here that I’d gain more interesting insights into the aboriginal culture and how it forms part of the enigmatic feel of the tropical Northern Territory. Although the wet season was approaching and the humidity was increasing, the next few months would be perhaps the most enjoyable of my entire Australian experience.

We only stayed a couple of nights in Darwin before hiring a car and heading into the wilderness again. This time we’d be backtracking south to Adelaide River. The crocodile tours here make this is a popular destination but we were set to explore the remarkable landscapes and Aboriginal history of the Kadadu and Lichfield national parks... 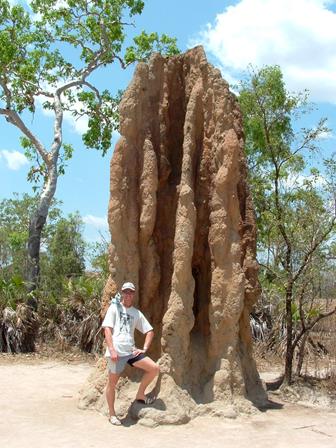 Kadadu National Park is a huge area with a geographical size larger than Israel. It’s more than just a national park – it’s an educational and cultural adventure set amid extraordinary natural beauty. We had four days to see and experience as much as we could. Unfortunately we couldn't get to the scenic highlights of Jim Jim and Twin Falls without a 4WD but being so late in the dry season, the falls have fallen so to speak. There is water all year but they are a lot more spectacular after the wet season in March or April.

There were other parts of the park which weren't accessible either but we still had plenty to see and do. From Darwin, it's a 300km drive into Jabiru, which is town in the centre of the park. On the way we stopped at Mamukala to watch thousands of magpie geese feeding on the floodplain. Jabiru is Kakadu’s major service centre and even has a gold course but it exists mainly because of the nearby uranium mine. It’s possible to take a tour of the mine but we had to find a suitable place to camp. 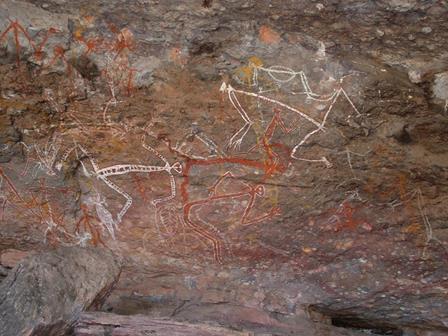 We spent that night at a place called Ubirr which has a nice walk and some fascinating Aboriginal rock art. It was incredible to realise that this work was done over 20,000 years ago! A park ranger was starting a talk as we arrived at one of the most significant sites. We then followed him up onto the huge rock outcrop where he gave another talk about the floodplains and surrounding country. Enjoying views of Arnhem Land and watching the sunset up there was a magical experience. 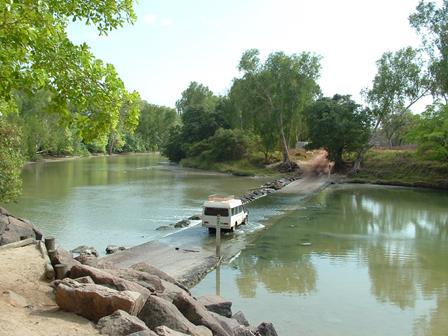 Crossing the river to Arnhem Land

The campsites of Kakadu are dusty earth and dry leaves. However the facilities were good and during the dry season there are often slide show presentations given by park rangers. In our three nights, we heard talks on the six seasons of Kakadu, buffalos in the park and crocodiles. The six seasons recognised by the local Aboriginal people create an annual cycle through the wet and dry times of the year.

The next day we explored an area called Nourlangie Rock. I did a couple of walks here including one along the East Alligator River. I was hoping to see a salt water crocodile but unfortunately I never did. The second walk went through some fascinating rock formations where layers of weathered sandstone have created all kinds of interesting outliers. The Anbangbang Shelter in this area was used as a shelter for thousands of years and features artwork that was repainted in the 1960’s. 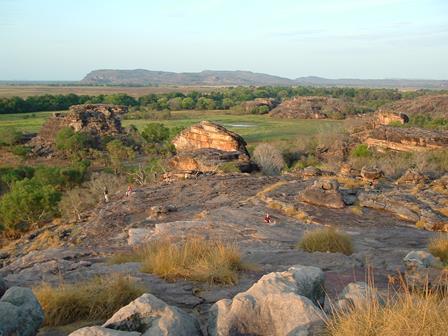 Unfortunately the crocodiles in the park mean virtually no swimming anywhere. (Kakadu becomes Kakadon't!) The only totally safe places to swim are the pools at Jabiru and Cooinda. With daily temperatures of about 38C, we swam at Jabiru before going to the nearby Bowali Visitor Centre. Cooinda is in an area called the Yellow Water and where we spent our third night. It was a lovely camp site with good facilities and green grass. After a refreshing swim, I went on a final unsuccessful quest to see a crocodile. 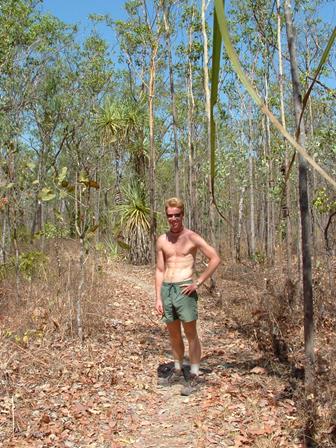 We decided to take a shortcut across an unsealed road on the way home. Everything was fine until we got to a river ford with about a foot of sand in the bottom of it. I thought about going through but not for too long. It would have bellied for sure so we had to go all the way back and an extra 300km around the long way. I hate it when that happens but better safe than sorry as they say!