Well, I've done it - all the way from the mountains to the sea! After another long day of travel I arrived in the huge, yet glamorous and charismatic city of Mumbai. There is no doubt that it has a very different feel to the other Indian cities that I've visited. The first reason is that it's so expensive. The hotel I'm staying in would cost about 150 rupees ($4.50) in most places but suddenly I have to pay 400 rupees ($12). I know, I know...it's still cheap but when you travel for long enough you begin to know what is a reasonable cost for various things.

The cost aside though, it's a very nice place to be for a couple of days. The reason is that it's a relatively clean city without the sense of chaos that seems to exist in most large Indian cities. Streets are all nicely paved and there are actually footpaths to walk on. Auto rickshaws, animals and trucks are banned from the area and in their place are taxis and buses, some of which are double-decker. So, there is a genuine English feel and the luxury cars offer glimpses of India's wealth. Although there aren't many 'sights' to see, the shopping and nightlife combine to make it a vibrant and enjoyable city. 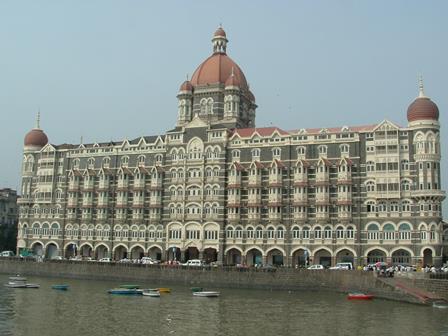 From Mumbai I went out to Elephanta Island and to be perfectly honest, this was a disappointment. The hour-long boat ride itself was good because it gave an appreciation of the harbour size but having been to Ajanta and Ellora, the caves were nothing special at all. In fact there were only five of them and four were barely worth seeing. So, for the same cost as the other places I basically looked through one cave. There was a free guide service there but it's not really something I'd particularly recommend to anyone.

The next day it was on a train to Ahmedabad. What I read in my guide book made me a little apprehensive about my visit there. With all it's industry it's been described as the 'Manchester of the East' and also, especially in hotter weather the 'City of Dust'. The road I stayed on is called Relief Rd and I love the quote my Lonely Planet has about it: "...one of the most polluted, congested and thoroughly chaotic strips of barely controlled mayhem in the country." What a great little excerpt that is! Relief Rd…relief from what? 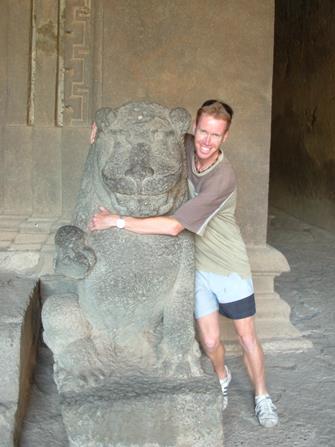 So, that's what I was contemplating as I sat on the platform in Mumbai but my more immediate concern was the unreserved train ticket I had in my hand and the usual huge mass of people around me. I've learnt that any train to or from Mumbai is going to be very crowded. As the train arrived I wondered how it would work because this is the originating station and it was empty. While I was thinking about it I didn't realise that everyone else was forming long lines to board the carriages!

When it seemed like I would be last on and no hope of a seat, a big guy approached me and asked where I was going. When I replied he told me to follow him. What happened next was quite extraordinary. He held people out of the doorway like my personal bodyguard and pulled me onto the train. Inside was just chaos and for a few minutes there were people shouting, pushing and generally fighting for space. But when the dust settled, I had my backpack on the luggage rack and my bum on a seat. The guy asked me for 100 rupees for his services but that was quickly bargained down to 30 and everyone was happy. Especially me...that was money very well spent! 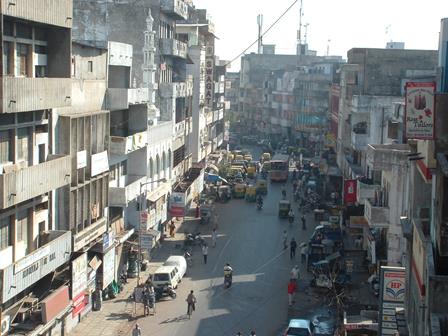 I'm happy to say that because I'm using an old guide book Relief Rd wasn't as bad as I'd braced myself for. In fact it was just another busy Indian city street like you'd see anywhere in the country. Certainly not a place for a pleasant stroll but not 'barely controlled mayhem' I imagined . The sights of Ahmedabad are basically a series of mosques and a fort which wasn't really of any interest at all. It's in neglect and now mostly used as government offices. So, I just stayed one night there before leaving for Palitana.