It was on this journey that things started to go a little pear shaped. The first part was fine but a puncture to the bus tyre was the beginning of the trouble. After the repairs were complete I started to feel unwell and in the warmth of the bus I started to feel cold. Then there were serious hints of diahorrea. Let me tell you... it's the most terrible feeling sitting on a bus, shivering and not quite knowing which will arrive first: your destination or bowel movement! I prayed hard it wouldn't be the latter and fortunately I made it okay.

The next 24 hours were spent in my hotel room either in bed or visiting the toilet. It wasn't pleasant. I also had the sweats and a high temperature at various times. My main concern was dehydration and I made an effort to drink as much as I could. I'm not certain what it was other than a virus of some kind and I have no idea where I picked it up. The possibilities are endless and it's simply one of the pitfalls of travelling the sub-continent. 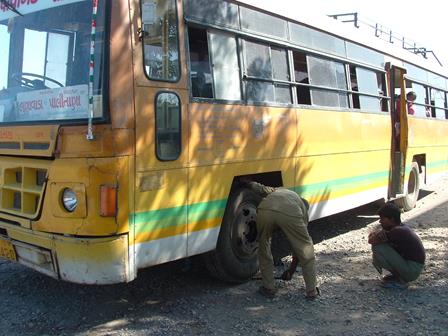 Just the start of my troubles!

Unfortunately, this has had an effect on my travels throughout Gujurat but I'm happy to say that it hasn't stopped me from doing anything that I planned. So although it hasn't been an optimal experience, I've enjoyed it just the same and seen some great sights. The first of these was the temples on the hilltop at Shatrunjaya (Place of Victory), 3km from Palitana. After the day I'd had previous you can probably imagine I was apprehensive about climbing the 3200 steps up to the top. But it was better than I had prepared myself for and the ascent took about 1.5 hours.

Before I even reached the top there was a sight that I unfortunately won't quickly forget and believe me...it wasn't something I was rushing to get my camera out for. In a country that is very conservative about dress and showing too much skin, a guy passed me on the path stark bollock naked! I had no idea what it was all about other than being of some religious significance. Just to make my day I passed him again going down the hill. Charming... 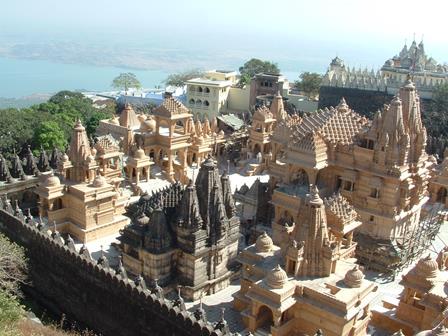 The temples themselves were amazing and well worth the effort to get up the hill. There are literally hundreds of them built over a 900 year period. Almost all of them are Jain and it is evidence of their belief that merit is derived from constructing temples. They are built in nine different enclosures with one main temple and many minor ones clustered around. They date from the 16th century because the earliest ones built in the 11th century were destroyed by the Muslims. The hilltop also gave nice views back to Palitana.

My next stop was the beach town of Diu. I'd been looking forward to the beach there and it didn't let me down. It's a beautiful, peaceful place with a strong Portugese influence. This is evidenced by the narrow streets and alleyways together with brightly painted buildings in the old town area. Diu township is on the eastern end of an island between a huge fort and city wall. I walked around the old fort which has a lighthouse within it that gave a great view of the town and across to the mainland. In the afternoon I hired a bike and rode down to the fishing village at the far end of the island. I stopped at a nice beach to watch the sunset on my way back. 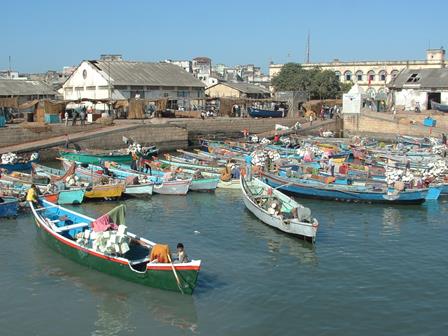 Despite my health issues, I really enjoyed travelling through Gujarat. The bus rides were relatively short and although the buses were standard-issue old meatwagons the roads were surprisingly good. To quote from the Lonely Planet again on the journey from Palitana to Diu: "...this is the trip from hell, along bumpy village roads in dilapidated old rattletraps." Sometimes I love it when my guidebook is proved wrong! It wasn't nearly as bad as all that. The trip from hell must surely be from Mandu to Indore. If there's a worse one than that I just don't wanna know!

← Mumbai and Ahmedabad → Junagadh and Udaipur