Kochin is a favourite destination of many travellers because it’s a place to soak up some 600 years of history and in the quiet, leafy streets of the fort area enjoy some respite from the hustle of the big city. It’s a place where you can still catch the aromatic smells of the past and in many places goats outnumber vehicles on the streets. But before I could do any of that I had to find myself a place to stay. I must have been to about ten guesthouses and had much the same reply: “sorry sir, the house is full”. Either that or a shake of the head and I was on my way to the next place... 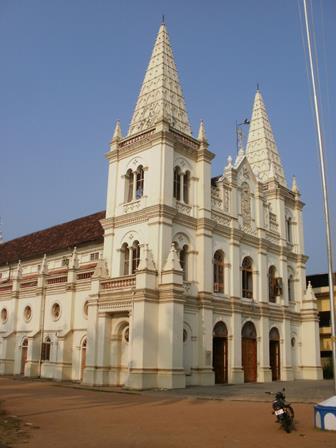 I finally found a nice little place very close to the boat that goes over to the fort peninsula. The cost of this 10 minute ferry ride was a seemingly ridiculous five cents. Although there was a Portuguese fort here centuries ago, its walls have long since disappeared. The only remnants I saw were located downstairs in a small museum dedicated to church artefacts. The other museum I visited in this area was the maritime one and relatively speaking, both have very well presented displays.

The church of St Francis is virtually a museum because it was originally built in 1503 and the edifice that stands today dates from the mid sixteenth century. It contains the tomb of famous Portuguese adventurer Vasco da Gama who was buried there. The nearby Santa Cruz Basilica also has about 500 years of history, although the current church was built in 1902. 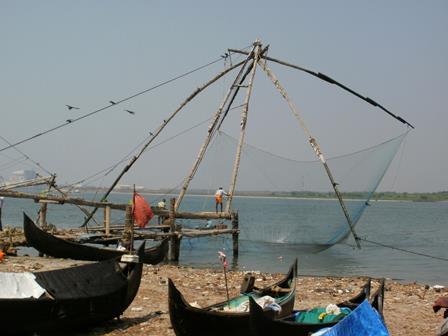 In the heat of the middle of the day I took some time out in the shade of a tree to watch the fishermen operating their huge Chinese nets. This method of fishing was brought to India by merchant traders centuries ago and has remained basically unchanged in all that time. After some lunch I walked across the peninsula to an area called Mattancherry. In the Jew Town here I visited the Dutch Palace which today is a good museum that was a bargain for the ten cents admission fee! Unfortunately the Jewish Synagogue was closed for their Sabbath day so I couldn’t visit. 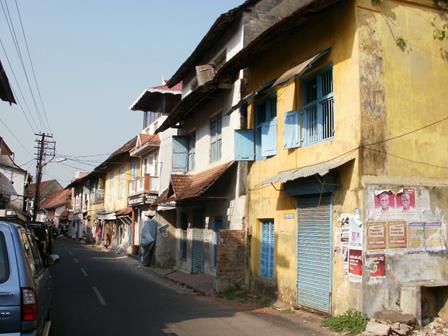 From Kochin I did what will be the longest bus journey of this trip – eight hours in three buses to the town of Mettupayalam. This was merely a stopover because early the next morning I was on the miniature train up the mountain to Ooty. Very early in fact because I didn’t have a reserved ticket and had to arrive at the station at 5.30am in the hope of getting one for the 7am departure. It was worth the effort to get a seat and the cost of the ticket was a whopping 20 cents! 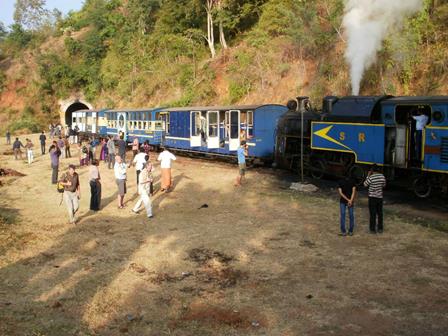 The train has only three carriages and was awarded World Heritage status in 2005. Being a mountain railway, the steam engine pushes rather than pulls the train so the front carriage leads the way. The five hour journey offers fine views of pine forests, tea plantations, waterfalls and villages that seem to cling to the side of hills. We passed through several quaint little stations where the engine was refilled with water and the passengers milled around taking photos and sharing their food with the resident monkeys.