The last time I wrote I was in the town of Kanyakumari and somehow it required four different buses to reach the beach town of Varkala but what a wonderful place it is. It seems a world away from the hustle of big cities; a place where travellers can catch their breath and relax before continuing the journey. It was my first destination on the state of Kerala. This narrow strip of land that runs beside the Arabian Sea is one of India’s most beautiful and successful states. This success was evident as I passed through the relatively wide and tidy streets in the capital of Trivandrum. 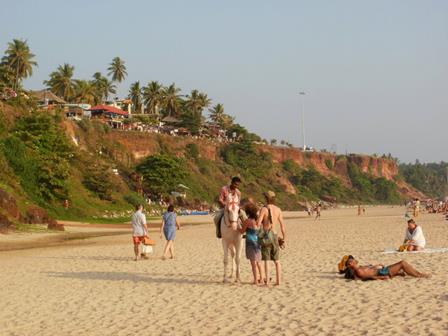 For the tourist, Varkala is a range of guest houses and restaurants that perch on the edge of a cliff overlooking the beach and rocky shoreline. Although there is ongoing development and prices are creeping up from what guidebooks indicate, it’s still a great place to spend some time. If I had more of it, I’d happily spend it there! Apart from the beach, there are a couple of temples to visit but the main focus here is relaxation, yoga, massage, spa treatment or getting that henna tattoo you’ve been thinking about since arriving in India.

The relaxation was put on hold for a couple of hours as I crammed myself and backpack into a very crowded bus bound for Kollam. There are many buses plying this route but I actually let the first couple go past me because they were packed to the rafters with bodies. Time was pressing though and I had to take my chances on the next one. So I inhaled deeply and compressed myself into the human sardine can. I was travelling with two friends so our three backpacks didn’t really help but we didn’t have a choice. There was a boat in Kollam that we had to catch. 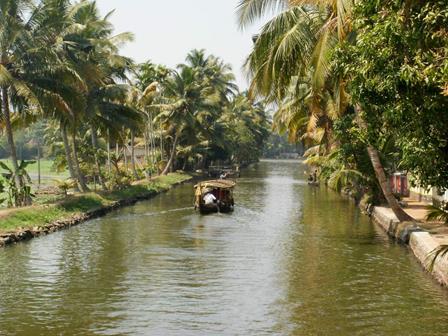 This boat was bound for Alleppy and would take us through the backwater canals that Kerala is renowned for. After we extracted ourselves from the bus, it became an absolutely wonderful day. It was, without doubt, one of the best I’ve ever had in India. The scenery along the canals is beautiful and with views of lush bush, green paddy fields and countless palms sliding past it was the epitome of relaxation. We made a stop for vegetarian lunch and another one mid-afternoon for chai tea.

The cruise took us past small villages along the canals which was an insight into the daily lives of the local people there. Some were walking or cycling along the water edge while others were bathing or doing laundry in the water. We received many enthusiastic waves as our boat passed by, especially from children. We passed boats of different sizes and shapes; from simple dugout canoes to the large and distinctive Kerala houseboats which cruise the canals with their guests. Another interesting part of the journey was seeing the large Chinese nets that are used for fishing. 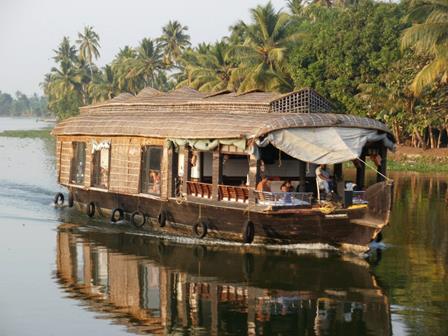 It’s not a long distance to Alleppy if you are travelling by bus but the boat took eight hours. We went through a canal lock at one stage which took some time. The following morning I did a boat trip on a local craft and my plan was to then catch the ferry that runs across the lake to Kottayam. That idea went out the window when I was told “very sorry sir but ferry is broken and not possible”. That was eventually translated into ‘broken down’ and the service I wanted was cancelled.

That delightful little moment made me think about the people that I’ve met along the way in south India. Before I left on this trip I was told by a few different people that those who live in the southern states are ‘different’ to those in the north. When I asked what these differences were I was told things like being friendlier, quieter, more laid back, polite and respectful to each other. Having already visited the north, I was curious to see how much truth was in these statements. 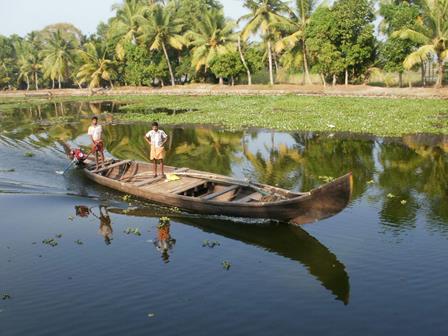 Having now been on the road for a few weeks I can say that I agree with all of the above. The locals that I’ve met have a distinct charm and are peacefully friendly in a way that I don’t recall on my previous trip. By that, I mean that I’ve had genuine conversations and been wished well by people who don’t want anything from me in return. Also it’s not overwhelming attention, which has happened before and can become tiring. Often my contact with the locals is a polite nod, smile or wave which is comfortable and appreciated. Chatting is great but there is a limit.

Anyway, with the broken ferry I had to abandon my plan for another boat ride and revert to the bus to Kochin instead. I had to smile as this Kerala Land Transport bus pulled into the platform. In faded red letters it had the words ‘Super Fast’ written on the side. This was basically indicating that the bus was an express service with limited stops. But I think super fast is perhaps a slight exaggeration of the truth in anyone’s language! The journey of about 100km took over two hours.