I'm writing this from the city of Bikaner in the eastern part of the Thar Desert. It's been a busy day visiting the Old City, Bazaar, Junagarh Fort and Lalgarh Palace. Just another typical day in Rajasthan really! I've only been to three cities since I last wrote but it's been an adventure and I've had a great time.

My destination from Udaipur was the lovely city of Jodhpur. In a straight line on the map it's about 220km. Now, I'm not certain exactly where the bus went that day but the journey took us 9 hours to complete. Do the maths on that one! Actually, to be honest I was worried for a while that I was on the wrong bus because I kept seeing distance signs for Jaipur. Jodhpur...Jaipur...in a Kiwi accent they may easily be confused. But finally as the day wore on I began to see signs for Jodhpur and rested in my seat a little more comfortably. 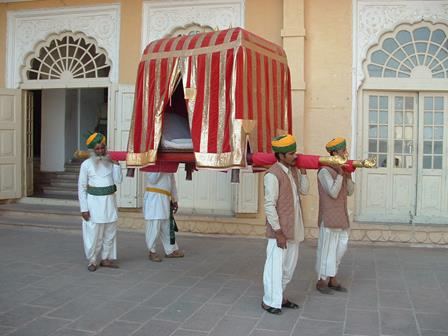 The main attraction in Jodhpur is the awesome Meherangarh Fort. This would have to be one of the best monuments that I've visited, certainly the most outstanding of the forts. Built in 1806, it sits majestically on a 125m hill overlooking the city. Within the structure there are a series of courtyards, palaces and a temple at the far end. The ramparts offer great views of the city.

It is also undoubtedly the most professionally managed. For tourists, the usual cost of admission to major historical sites is 250 rupees ($7AUD). The exception to this was the Taj Mahal which was 750 rupees ($21AUD). The cost for Indians however is only a small fraction of what we pay - in most cases about 5%. This is often a good topic of discussion between tourists and there are various opinions about it. The general feeling though is one of acceptance through having no choice. It's either pay or miss out.

Anyway, in many places you poke your payment through a small window and get issued with a little ticket without any thanks. But in the Jodhpur fort I received both a map and audio headset so I could do a self-guided tour. So I had an explanation in perfect English at each of the significant points. There was even a lounge with sofas where I could rest and get a drink. All the employees were dressed well and wearing name badges. It was quite unlike anywhere else. 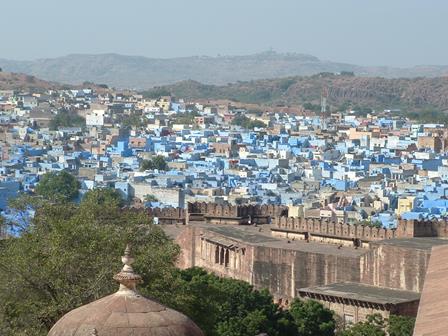 Jodhpur is known as the 'Blue City' because of the colour of so many buildings in the old city area. There are a couple of reasons for this. Apparently it makes them cooler in summer and the blue also acts as a mosquito repellent. The views from the fort are magic. It's also interesting standing on the edge of the ramparts and listening to voices and the sounds of the city being swept up by the air currents. A few metres back from the edge the sounds disappear.

I also visited the Jaswant Thanda, which is a beautiful white marble cenotaph and the Umaid Bhawan Palace and Museum. Begun in 1929, this palace is the last to be built before India's Independence. Constructed of marble and pink sandstone, it is immense and most of it is now a luxury hotel. Other than that, it was interesting just wandering around the various narrow alleys and markets which sell spices, textiles, silverware and handicrafts. 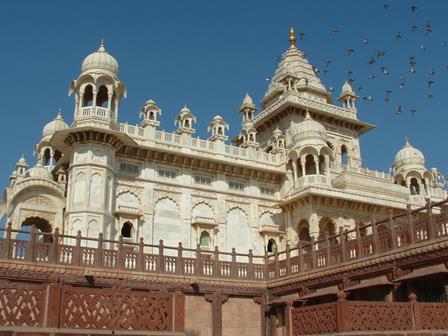 From Jodhpur, it was west through the Thar Desert to the beautiful city of Jaisalmer. The scenery on this journey reminded me a little of the Australian outback. Vast arid plains of sandy soil with various grasses, shrubs and trees. Jaisalmer is dubbed the 'Golden City' because of the honey colour created as the sun sets on its buildings. It has one of the most spectacular forts in the country and there is a remarkable unspoiled feeling about it.

I noticed the presence of the Indian Army as we got closer to Jaisalmer. The border area with Pakistan is a military zone and there is an army base just outside the city. But the Border Security Force or the occasional sound of fighter jets in the sky doesn't really impact on the tranquility of the city. This is truly the place where tales like Aladdin and Ali Baba come to life. 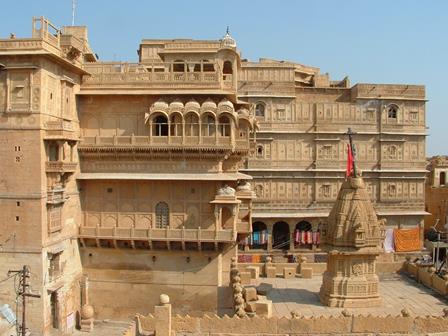 Aside from admiring the fort and impressive mansions of carved sandstone called havelis, I went to Jaisalmer to do a desert camel safari. There are many different choices and I visited a number of agents to establish what I wanted to do. In the end, the choice came down to doing a 'tourist' or the seemingly more popular 'non-tourist' safari. The prices ranged anywhere from about $10 to $25 per day. In the end I decided to do a three day 'non-tourist' safari and that adventure will be in my next post.