My next bus ride took me to the city of Junagadh. The main reason for staying here is to climb the nearby Girnar Hill so see more hilltop temples. If I thought 3,200 was a fair hike, this one was 10,000! Actually, it's not quite that bad because the bus takes you to about step 3,000 so you 'only' have to climb 7,000. The steps were constructed early last century and I have no idea how these temples were accessed before that. Climbing them and passing all the little refreshment stalls reminded me a little of the Annapurna experience. 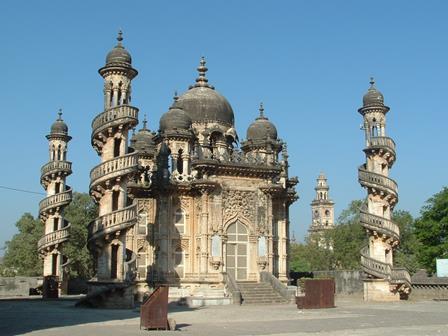 To avoid the heat I started the ascent at 7am and altogether it took me about two and a half hours. It probably would have been shorter if it wasn't for the misfortune to be doing it on a Sunday. It's the local's day off and there were literally thousands of them making the pilgrimage up the hill. I couldn't believe how many of them there were! I wore my MP3 player so I wouldn't have to answer the maddening questions of 'what's your name?' and 'which country are you from?' every five minutes.

The temples themselves were quite beautiful and characterised by mosaic marble and some intricate carving around the doorways and also on the inside of the rotundas. Unfortunately for some reason they were very strict about not being able to take photographs. I had one security guy follow me all around one temple to make sure my camera didn't emerge and I couldn't take my bag into the next one at all. Once again, the climb afforded a great view back down the mountain to Girnar village and Junagadh beyond.

Junagadh also has a fort but it was nothing much to write home about. The main attraction within its walls are the Buddhist caves but I gave them a miss. I think I've seen enough rock-cut caves for now. The most interesting thing I did see though was the stepwells or baolis. These are huge wells with water in the bottom that would once have been used for bathing and keeping cool. Access is by steps; one had a straight stairway and the other a circular. The water now is filthy but it didn't stop one woman drinking from it. I almost felt ill watching her.

Another important thing I wanted to do in Junagadh was visit the zoo and see the rare Asiatic or Gir lion. The last remaining home of this lion is a sanctuary within the Sasan Gir National Park. Overall, the zoo was surprisingly good and contained many other animals and birds from around India and beyond. I don't think I'd ever seen a hyena before so that was fun but seeing the lions was the main feature for me. I visited the museum there also which has some interesting exhibits such as paintings, silverware, coins, pottery, textiles and some rather moth-eaten stuffed animals. 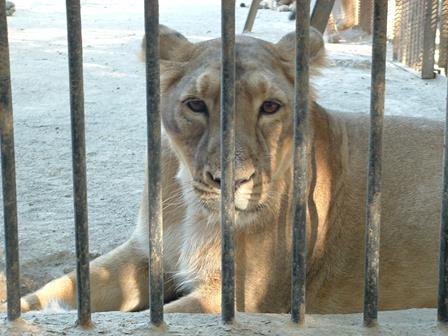 Well, here I am in the city of Udaipur in the state of Rajasthan and what a wonderful place it is! I've only had the opportunity for a short walk around the old city area but it has a romantic and mystical atmosphere. It's been described as the 'Venice of the East' and having been to Italy I sense why. It's beside Lake Pichola and there's a palace (now a luxury hotel) on an island just off shore. I'm looking forward to spending the next couple of days here...

I decided to go straight through Rajkot because there's nothing much to see there. I had another night in Ahmedabad and so I'm now a few days ahead of my itinerary. I'm pleased about that because I'd like to spend a couple of nights in Pushkar. I may also need an extra night in Jaisalmer depending on how long I go on safari for. But for now I'm just going to enjoy where I am. Its nice being in a place where so many signs are in English and tourists...I've seen more in a couple of hours here than I've seen in the whole of India so far! 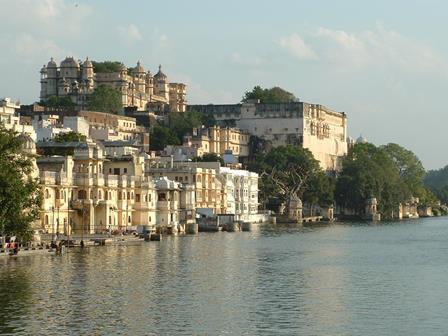 I so enjoy being able to just blend in a little bit. It's a complete contrast to a little place I passed through on the way to Diu. I don't even know the town's name because it was merely to change buses. Thankfully I was with another couple of tourists but as we waited we were surrounded by a crowd of literally 60 people (I know this because I counted them!). They could only speak a few words of English between them but it didn't seem to dull their curiosity. Obviously not too many tourists pass through their little part of the world!

The bus ride today was enjoyable and it's not often I'd say that! The highway between Ahmedabad and Udaipur is very well constructed and maintained. It'd be a nice road in any country but in India it's absolutely top class. As good as it gets. The bus was relatively quiet and as I've become used to in Gujurat, not crowded. There were consistently more seats than bodies which makes a very nice change. I'm not sure how the buses are in Rajasthan but I'm starting to think that compared to the train bus is the lesser of two evils and I prefer it as my mode of travel. Time will time...