Unfortunately the company I booked with was managed by a disorganised idiot. He told me there would be other people in my group but I arrived in the morning to find I was alone. Apparently the vegetables he had for me were eaten by a cow so we had to stop along the way to buy more. As he was doing this, a policeman was writing him a ticket for illegal parking of the jeep! I honestly wondered what the next few days had in store for me... 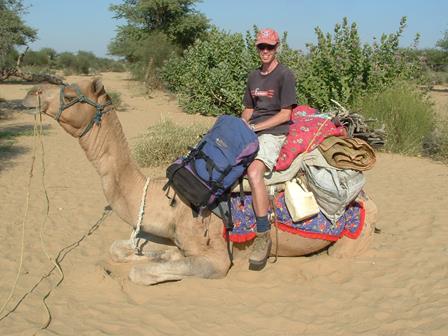 Packed and ready to go

I was disappointed not to have others with me and I was surprised that we only had one camel between us. But apparently this is the usual practice and while I rode my guide would walk ahead leading the camel. Fortunately, once we started I had the services of a very good guide. He was happy and would often sing as we made our way through the desert. He really did a great job making sure I was comfortable, happy and enjoying the experience.

I admired his energy and organisation. Whenever we stopped and unpacked the camel it wasn't long before we had a fire going and tea brewing. While I enjoyed my hot tea, he would prepare the meal. Both lunch and dinner were similar and consisted of mixed vegetables, chapati (flat Indian bread) and rice in the evening. For a meal made over a small fire out in a desert it was great food and I appreciated all he did. He also knew the camel well and we didn't have any problems with him along the way. 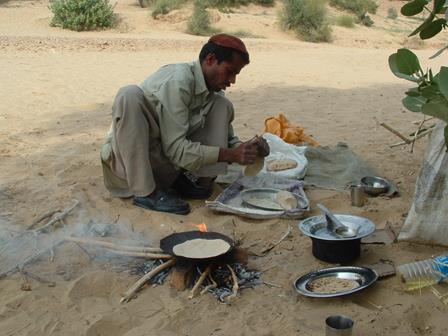 Another big consolation was that we met up with other groups each night. (It seems the 'non-tourist' trail is starting to get well worn) So, after we'd had dinner we walked across a couple of sand dunes and joined them. The second night was great because they had a nice big campfire and one of the guys had a guitar. We even got to sample some genuine desert whiskey. I was a little apprehensive about how cold it would be in the desert at night. I didn't need to worry because I took my sleeping bag and the guide had four blankets between us. Sure it was chilly but I was quite warm and slept okay.

Now...I guess you're curious about what it's like to ride a camel for three days. Well, to be honest it's not the most comfortable experience! The saddle had plenty of padding because of the pillows and blankets we carried so no problem there. But having my legs stretched in opposite directions for a couple of hours at a time was interesting. The inside of my thighs hurt and when I dismounted I could hardly walk for a few minutes! But I'm happy to say that it did get easier and I did things a little more gracefully as we went along. 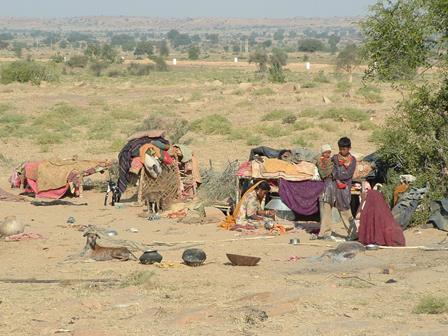 Gypsy camp in the desert

We were supposed to meet our friend from the agency at 4pm on the final day but not surprisingly he was late. When he finally arrived it was on a motorcycle because apparently the 'jeep had a problem'. So I jumped on the back of his motorcycle and we only rode for a few minutes before he stopped by the side of the road. We had a puncture. This guy just amazed me...everything he did seemed to go wrong! He waved down a truck and asked them to drop me into the city. As I left him, he offered me accommodation for the night which I quickly declined. The place would probably have a fire and burn down!

So, there we go...my camel safari experience. Although it wasn't quite what I imagined, I'd have to say I enjoyed it. There is something unique and special about riding a camel through the desert. The silence was sometimes only broken by my guide singing or the distant tinkling of bells on goats as they walked. We visited villages made from mud huts with thatched roofs and watched as boys herded goats or black-faced sheep. I listened to a desert legend and we slept beside a campfire in sand dunes. I'll remember it fondly...

← Jodhpur and Jaisalmer → Pushkar and Jaipur