DISCOVERY BAY AND MOUNT RICHMOND The Discovery Bay Coastal Park begins at Nelson and extends virtually all the way along the coast to Portland. It is recommended to walk the direction I did because the sun and prevailing wind is generally behind you. However when I came through the dunes at Ocean Beach the sun was high overhead and there was a strong wind right in my face. I had 7km of walking on sand with a heavy pack to reach White Sands camp. Fortunately I found that the high tide mark offered a reasonably firm surface to walk on and I got the job done okay.

White Sands is probably the most rustic campsite on the route but it was very welcome after 1½ hours of battling into the wind. Set in the shelter of the sand dunes, it offered a comfortable place to spend a night. Every day I appreciated the long twilights which offered daylight until about 9pm. By this time in the evening the wind had dropped so I went back to the beach and enjoyed watching the sun set over Discovery Bay.

Lake Monibeong is a fresh water lagoon which is popular for trout fishing and bird-watching. There is something exhilarating about walking beside a wild ocean on an isolated shore but from White Sands I took the inland route because I knew I had 17km down the beach the following day. The campsite was excellent (with the luxury of flush toilets!) and lake itself was absolutely beautiful. The water was crystal clear and I enjoyed a couple of swims during the afternoon. The kangaroos at this site seemed relatively tame and weren't in a hurry to disappear into the bush at first sight. 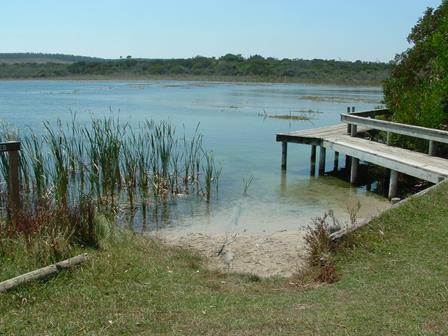 The third day along the beach dawned to a cloudless sky and promised plenty of sun. I tried to leave a bit earlier but it was impossible to do all I needed to in the morning in less than 1½ hours. So it was the usual 9am departure as I hit the beach. It was a beautiful morning – warm with gentle sea breezes. I found some firm sand underfoot and all seemed perfect…except for the flies. I could hardly believe the number of March flies that were following and attempting to land on me at any given opportunity. For those unfamiliar, these are the large flies that bite, even through clothing sometimes.

Initially I simply tried to keep legs and arms moving to avoid them. Then I began to lose patience and decided they had to die. It was war and I left a trail of bodies along the sand. I had the sounds of Culture Club's War Song stuck in my head as the sun climbed higher and it grew hotter. There was no shelter from the elements anywhere and I ran out of water. The worst part was the final couple of kilometres through the sand dunes to the Swan Lake campsite. I felt like I was trudging though a desert in search of the oasis and prayed I wouldn't miss any track markers.

All my romantic notions of swimming in Swan Lake were destroyed when I arrived. This was the worst campsite of the entire track. It was little more than a dusty carpark with a toilet and tap offering underground bore water. The only reasonable place I could find to pitch my tent was actually on the track itself. I had trouble even finding the lake and when I did it was anything but appealing. The black mud and dirty water meant I happily settled for a bath from the tap. Very disappointing...

It's at this point where the track either continues down the beach again or deviates up into the Mount Richmond National Park. I thought the latter option was preferable and took the appropriate track the following morning. The initial gradual uphill offered a nice view looking back but the section of track between the two national parks will remain my least favourite memory of the hike. It involved walking on soft, sandy forestry roads and 4WD tracks through pine plantations that had been scarred from recent logging. It was in this unattractive landscape that I missed a track marker and became lost. 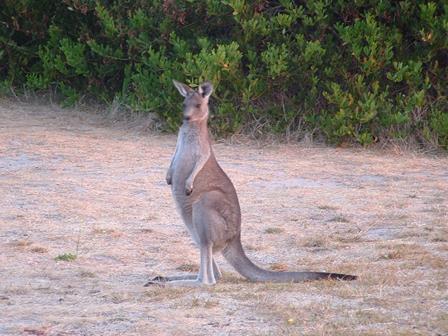 A common visitor to my campsites

I thought at the time it was unusual to come to an intersection devoid of any track markers and if I was thinking clearly I would have turned back right there. Instead, I assumed that walking straight ahead would be the correct course. And we all know what assumption is right? Arriving at a second corner without any markers was an obvious reminder of what assumption is! After a few muttered expletives I had no choice but to turn around and slog back to where I'd seen the last marker. The one I missed was only about 100 metres from where I'd last taken a break!

It was getting hot as I made the gentle but unrelenting ascent to the top of Mount Richmond (229m). I was hoping for a view from the top of this extinct volcano but there were too many trees to see anything. Even the panorama once offered from the lookout tower is now obscured by the surrounding vegetation. I was happy however that there was a rainwater tank in the picnic area because I still had 1½ hours hiking to get to camp.