THE GLENELG RIVER After 80km the track emerges at Moleside Camp to follow the mighty Glenelg River out to the coast. (Notice how you can spell 'Glenelg' backwards and it's still correct?) This was one of my favourite camps and I enjoyed a swim soon after I arrived. It was here that I realised that the river is tidal and the water has a slightly saline taste to it, even some 50km from the ocean. It is a magnificent river though and for the length that I walked it always spanned about 50 metres across to the other bank. Views of the water would come and go as the track pushed through bush on the south side of the gorge.

I stayed at Murrell's Camp which was a lovely spot beside the river where I had a well earned swim and even did some laundry. The only problem I had was there was hardly any level ground to pitch a tent. I chose what I thought was the best place but still felt like I was sliding down to the far corner all night! After the company of only birds and animals for three days, it was nice to meet a few groups of day walkers and fishermen in this section of the walk. I never met anyone doing more than this and had every single campsite to myself. 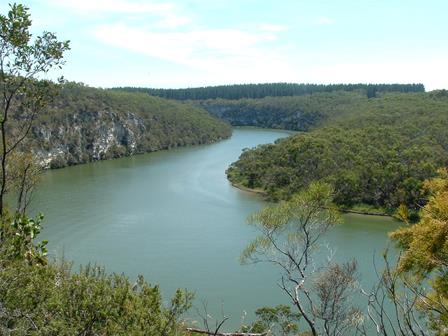 I decided to throw in a long day and miss the picturesque Patterson's Camp in favour of getting to Simson's Camp. It meant completing 24km on a hot day but it was one of the best sections of the whole track. In the lower reaches of the Glenelg River the gorge becomes much deeper and the track offers some spectacular views from on top of the limestone cliffs. It goes past a number of popular picnic and camping areas, some of which were being well used. At its most westerly point the track follows the curve of the river into South Australia. I had lunch at the lovely little picnic area of Hirth's Landing.

Simson's was a pleasant campsite but I was disappointed there was no river access. After a hot sunny day I was eager for a swim but had to settle for my daily rainwater bath instead. It was here that I was woken in the middle of the night by something scratching around beside my tent. I got a fright and unzipping my tent door revealed a possum. This was Australian wildlife I could happily do without! They don't have much fear but I scared it as much as possible and fortunately that's the only one I saw in the two weeks. 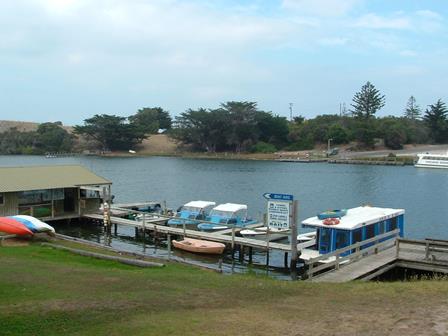 The small township of Nelson represents the halfway point of the Great South West Walk. It's a place to restock with food for the journey back along the coast to Portland. There are a few historic buildings which now serve as the local pub and a guesthouse. It has a petrol station, food kiosk, boat hire, church, information office, several houses and not a lot more. The kiosk had limited and very expensive supplies but I managed to accumulate what I needed before heading south to begin the trek along the beach.