THE CAPES AND BAYS The 27km from Tarragal Camp around Cape Bridgewater to Trewalla Camp was my longest day but also one of the most enjoyable. Initially I had to traverse some pastoral land which offered beautiful views of Bridgewater Lakes. After enjoying some native bush around the lakes the track pushed its way out onto the rugged and windswept headland. As I progressed down the western side the vegetation became sparser until it became barren with a moonlike appearance. I took a break at The Springs camp, which was surprisingly well presented and so named for the freshwater spring nearby. 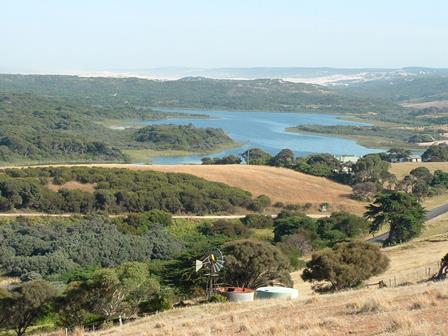 At various points there was evidence of the ancient lava flow that created the cape. Unfortunately there wasn't much action at the blowholes when I was there but it wasn't much further to see the Petrified Forest. There are a number of theories about how this surreal landscape of calcified sediment was formed. One of these is that a forest was smothered by a large sand dune and water seeping down through the sand formed a crust of sandstone on the outside of the tree trunks. This process decayed the organic matter, leaving behind the "petrified trunks". 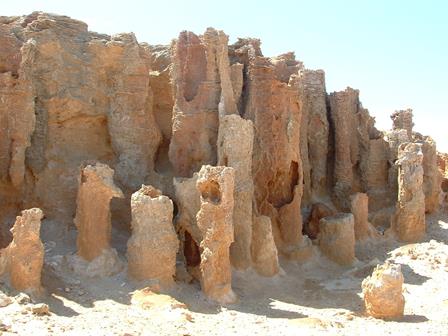 After rounding the southern tip of Cape Bridgewater the track passes high above a colony of Australian fur seals, over the highest sea cliff in Victoria (130m above sea level) and descends to the tranquil community of Bridgewater. This eastern flank of the cape is sheltered from the prevailing wind and is noticeably greener. I had the recommended fish and chips for lunch before following the gentle curve of Bridgewater Bay around to Trewalla camp. This site offered good views looking back to the cape I'd just walked from. The only worry I had that night was the dark clouds that rolled in from the sea during the evening because my tent is not entirely waterproof.

Although I woke the next day to a heavy looking sky it remained dry and reasonably warm. In fact I never had more than a few light spots of rain the entire hike. The next headland I had to round was that of Cape Nelson. After a few kilometres along the beach the track climbs (which the help of some wooden steps) up the dune and onto the cape itself. Although smaller, the scenery is similar to Cape Bridgewater with the landscape becoming very rugged and barren toward the end. At the southernmost point is the distinctive red and white Cape Nelson lighthouse built in 1884. 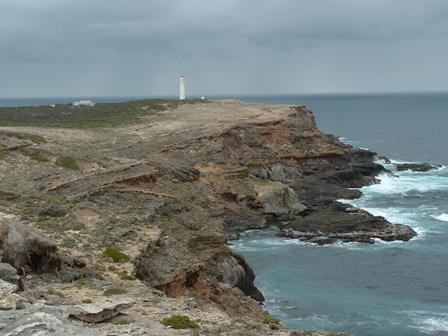 It was noticeable that extra resources have been allocated to the track and campsites around the headlands. This is clearly the most popular section and many people do the 'Three Bays in Three Days' walk from Portland to Bridgewater Lakes. I stayed at Mallee Camp on the eastern side of the Cape Nelson. This was a lovely campsite apart from one thing: it's located close to a large wind turbine. The sound of the huge blades cutting the air disturbs both the ambience and even your sleep if they continue turning into the night. Fortunately for me the wind ceased soon after dark so the turbines fell still and silent.

The track passes through the Enchanted Forest on Cape Nelson. This is where the twisted branches of Moonah trees, draped by vines and surrounded my lichen covered rocks combine to form a slightly haunting and fairytale like setting. Yellow Rock is a popular surfing and picnic spot but deserted as I passed by. The final cape of Sir William Grant is the smallest of the three and leads onto the aptly named Point Danger. There is a large Australasian gannet colony in this area.

The final few kilometres into Portland is a much better walk than the track leading out the other side. The local aluminium smelter provided funds for a smooth 2km pathway suitable for the disabled. There are nice views of Portland Bay and it passes historic sites such as a sealing station and bay used for quarantine purposes in the 1800's. Part of this section is dedicated to one of the locals who volunteered much of his time over the years to develop and maintain the track. It's these people that make the track what it is today and I owe a special thanks to. 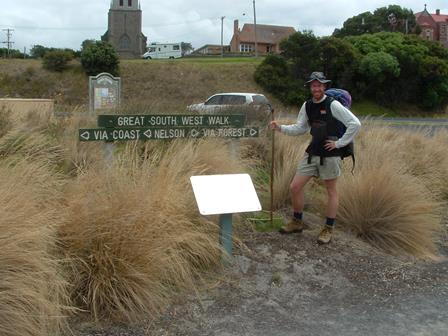 Returning to Portland completed the Great South West Walk and I took a moment to reflect on the experience. I'd hiked 13 days through wonderfully diverse scenery, observed fascinating wildlife and enjoyed good weather. I'd recommend this walk to anyone because of its variety. From a vision conceived nearly 30 years ago, it became a beautifully planned and well constructed hiking track. Through the years it's received various upgrades and extensions to become the world-class walk it is today. It truly is a symphony in four movements; each of them unique and offering something different to the others. The brochure for the walk asks the question "When will you do it?" I'm now very happy to be able to answer "I already have."