Although I only met a handful of people along the route I never felt lonely out in the bush. Through the northern half of the track I had every shelter (21 consecutive nights) to myself. It was an odd feeling when another hiker arrived and I had to share one. The main reason I never felt lonely was because of the log books at every shelter. There were always two - one to record basic details and another to write your thoughts, comments, philosophy, complaints and memories. As I progressed along the track, I started to recognise various names and got to know them through their comments in these books. 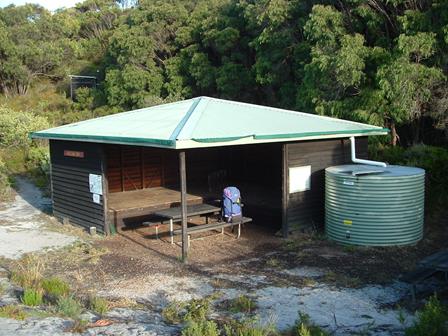 Typical campsite in the southern section

So, I would hike alone through the first part of the day and then 'catch up' with people later in the afternoon. The date of their entries didn't seem to matter because apart from small diversions and realignments, we all basically followed the same route. So I enjoyed reading what they thought about the day and often found their comments very amusing, especially if there were hills, sand dunes, swamp mud or adverse weather involved. I was also interested in reading comments from hikers going in the opposite direction because they offered valuable information on track conditions, accommodation and where to buy supplies.

One of the hikers who did the track in summer wasn't quite so content with her own company. One of her entries read: "After three and a half weeks, one finds oneself to be quite the bore." There were some genuinely funny things written and I copied them into the back of my journal. This is an entry from one of the first shelters: "First night on the track and a wet day made my backpack 20kg heavier. Sleeping on a bed of nails would be luxury compared to the hard wood floor. Oh, the peace and tranquility! Only 16 in the shelter tonight, including 6 ten year old boys. I'll be back - this is addictive stuff!" 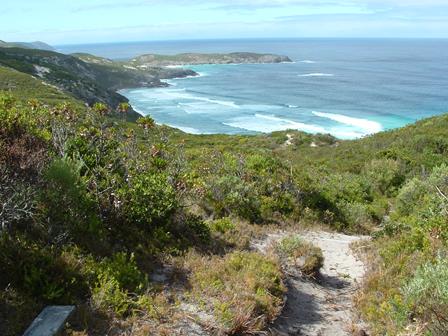 Aside from all the amusing quotes, thoughts and poems there were also some inspirational comments. The one that really stood out to me was this: "If there were no difficulties in the track it would let in a poorer class of walker and reduce the status of the end-to-enders." That really inspired me if the track was overgrown, the weather was bad, my pack felt unusually heavy, I was tired or if the terrain was challenging. I simply repeated that quote to myself, reminded myself what I was doing and that it wasn't meant to be easy.

Overall though, I did it much easier than many others. Amazingly, I completed the whole distance without even a blister. Apart from some general soreness when I first started, I didn't have any problems at all. There wasn't a single day when I didn't wake up and feel excited by what I was doing. Even on the most physically demanding days I embraced the challenge and never felt any doubt about reaching Albany in good health. The weather was generally very good and my Goretex jacket was often nothing more than my pillow at night. I only had rain on four days in the entire seven weeks. 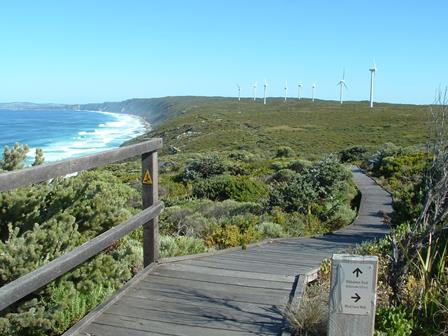 The huge distance of the track was sometimes more of a challenge mentally, especially through the first week or two. After slogging through the heat and hills of the first couple of days I remember thinking that I'd only completed about 4% of the journey! So I tried to focus only on what I'd completed, not what I still had to do. When I passed the halfway mark I was happy to think about both. In my mind I treated leaving a town the beginning of a new hike and it often felt that way. I had fresh supplies, clean clothing and in one place I even washed my backpack and I started again feeling great.

A great aspect of this hike was that it offered seven weeks in a beautifully peaceful environment to contemplate, reflect and dream. Life becomes wonderfully simple because the path is laid out for you and all you need to do is follow it. The Bibbulmun Track is like a well cut jewel that shines whichever way it is approached. A special thanks to all the park rangers and especially track volunteers who keep it this way. It's been a privilege to walk its entire length and I'd recommend the experience to anyone. 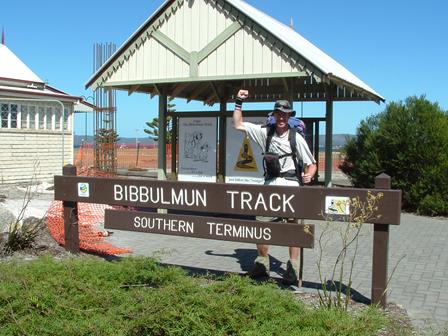 Triumphant at the Southern Terminus