Finally, after 730km of hiking through forests, bush, mountains and valleys I arrived at the coast. It was an amazing feeling to see the ocean and it certainly added another dimension to my hiking experience. Mandalay Beach is the first beach I arrived at and was named after a shipwreck early last century. Tides and shifting sands mean the wreck is sometimes uncovered but I didn't see anything. The coastal views were great but I really had to earn them, especially in the softer sand dunes. 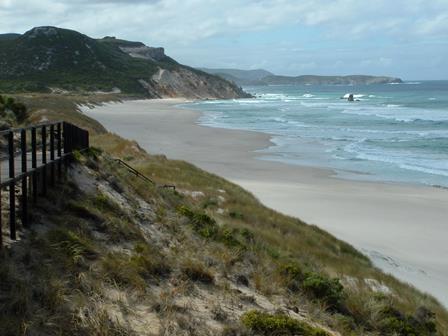 Sand dunes can be hard work and sometimes it feels like taking two steps forward and one back. In my first day along the coast, I also had a stiff head wind, the track was overgrown in sections and I was doing 29km which ended in a steady climb up a mountain. So, although I was very tired when I arrived I could reflect on one of my best days. The scenery went from the rugged plains to coastal heathland, to the beach, sand dunes, lovely forest and finally the mountain...all in a day!

During my journey east towards Albany I had to walk a number of beaches and cross a number of inlets. Fortunately at this time of year there are seasonal sandbars at the mouth of the inlets so I had no problems. At other times of the year hikers have to wade across or in one case follow the track around to a canoe shed and paddle across to the other side. That would have been fun but on a day where the distance was 23km over sand I was quite happy to save walking a couple of kilometres!

I think the longest 20km I've walked in my life was one day between Walpole and Denmark. It was a hot and started with 11km over some big sand dunes. Nice views but hard work. My reward for all that was a walk along Mazolleti Beach that went for 7km. A long drag but fortunately most of the sand was reasonably firm around the high water line. My final reward for all that was a 2km slog straight uphill to the campsite! I saved that till after I'd enjoyed a swim in the translucent waters of the Southern Ocean.

The entire track is marked by yellow triangles with a black mythical waugal snake printed on it. (According to the original south-west Aboriginal people, the waugal or rainbow serpent is an all-powerful creator who created and maintained the natural and cultural law. It is believed to inhabit special areas and remains sacred to them.) On average, there are about four of these markers per kilometre generally nailed to trees but also on posts, logs, signs and rocks. Altogether there would be about 5000 of them. 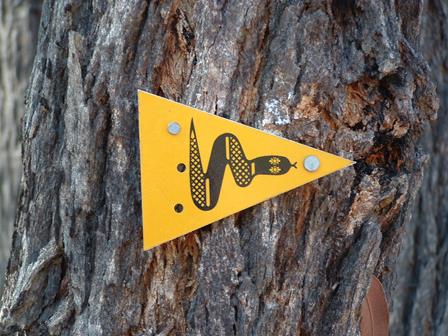 So I didn't think navigation would be a problem but it's actually very easy to lose the track. I think virtually everyone does it at some point. The reason is that the Bibbulmun Track merges and intersects with various other tracks, paths and roads. So, if you have a moment of inattention at a vital time you'll walk past a marker indicating a left or right turn and continue on what you think is the correct route. Suddenly it'll occur to you that you haven't seen a marker for a while and it becomes a choice between continuing in the hope you'll find one or return to where you saw the last one. After having to backtrack a couple of times I quickly became a lot more alert for markers! 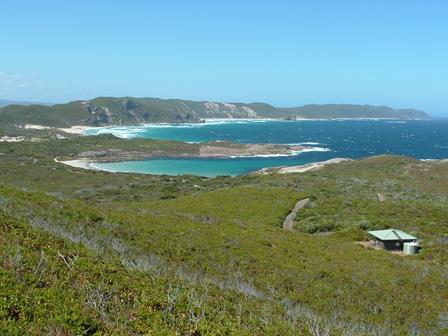 Fortunately I didn't have the same problems as some people. I read about a few who got lost for up to three hours coming down one of the mountains. They claimed the cairns were poorly aligned but I didn't have any problems. Then there was this quote in one of the hut log books: "Got lost in the swamp but didn't realise it. Saw waugal and headed back down the real track. Realised I was going the wrong way, turned around and got lost again!" Amusing…but only in hindsight!