The 250km long Great South West Walk provides a fascinating variety of scenery and wildlife in the southwest of Victoria. The track winds inland from the town of Portland and reaches Nelson via the Cobboboonee Forest and Glenelg River. From there, it returns along the beaches and rugged capes to complete the loop. As it is cleverly promoted, it is a "Symphony in Four Movements". 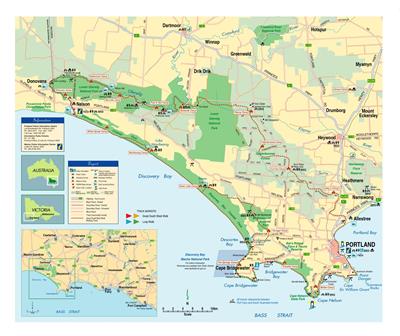 My hike of the Great South West Walk started in Portland on February 9th, just two days after the state of Victoria was devastated by the worst bushfires in history. As I stepped from the plane on the day which will be forever remembered as 'Black Saturday', I was greeted with a temperature of 47ºC and strong, hot winds. So I had obvious concerns about the fire situation, but the worst affected areas were northeast of Melbourne. Apart from a fire which damaged the train line, the western part of the state appeared to be largely unaffected. On the day I started the temperature was down to a very comfortable 21ºC. 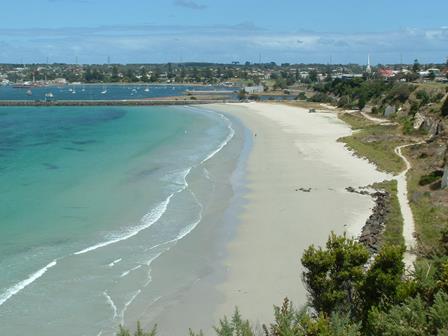 THE COBBOBOONEE FOREST To be quite honest, I didn't find the first day out of Portland very inspiring. The town itself is attractive and there were some nice views of the harbour and as the track passed the historic Whalers Bluff lighthouse built in 1859. I also took time to do an interesting little self-guided tour of the old cemetery. I had some navigation problems though and a few more markers in these initial stages would have been appreciated. For most of the 20km I seemed to be walking on either residential streets, sealed or secondary unsealed roads and it was only in the last few kilometres that I felt I'd actually left civilization.

Starting mid-afternoon meant it was getting late by the time I arrived at the first camp. I was so happy to be there, pitch my tent, unroll my sleeping bag and hang up sweaty clothing. I was just imagining how good a cup of tea would be when I realized: there was no water! I was puzzled that there should be a toilet and fireplace but not the promised rainwater tank. It then occurred to me that I'd arrived at a disused campsite and the new one was a further 2km. There was no option but to pack everything up and ask my weary legs for another 25 minutes work. In the fading light I nearly tangled with a snake on the track and the adrenalin from that had me surging into Cubby's Camp!

The three days through the forest offered relatively easy hiking. The track was wide and well maintained. There were very few undulations so it was very pleasant walking. The weather was generally overcast and temperatures through this entire section were unseasonably cool at only about 20ºC. So all those factors meant I was able to hike at 5 kilometres per hour and estimate my arrival time at the next camp accurately.

Cobboboonee is a native Australian eucalypt forest. The track explores the headwaters of two rivers and ferns seemed to flourish in these areas. It traverses heathland areas and Messmate trees. These are also known as Stringybark for the way bark can be easily peeled from the trunk. It also passes an unusual pond called The Inkpot. The water is a distinctive black colour (caused by an accumulation of decayed vegetation) and forms an interesting contrast with the surrounding earth. 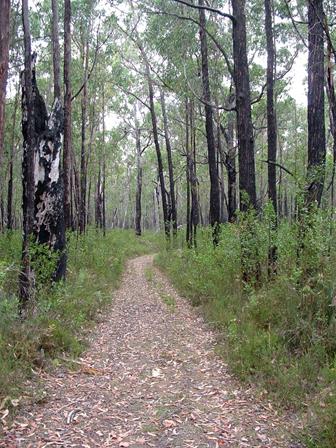 At a couple of the forest campsites I was greeted in the morning by one or two grey kangaroos. After I emerged from my tent it usually didn't take them too long to disappear into the bush. I saw a couple of echidnas on the track but they were very shy and shuffled away as soon as they sensed the possible danger. Unfortunately I didn't see any koalas but the forest is home to some beautiful birds. Occasionally I'd see the bright red and deep blue of Crimson Rosellas flicking through the trees and also several flocks of the white Sulphur Crested Cockatoo.