Another trip that I’ve done while living in Brisbane is back to the southwest of Australia to hike the Bibbulmun Track. This is one of the world's great long distance walk trails, stretching nearly 1000kms from Kalamunda in the Perth Hills to Albany on the south coast of Western Australia. It goes through the heart of the scenic South West and traverses some of the most beautiful bush, forests and beaches that Australia can offer. 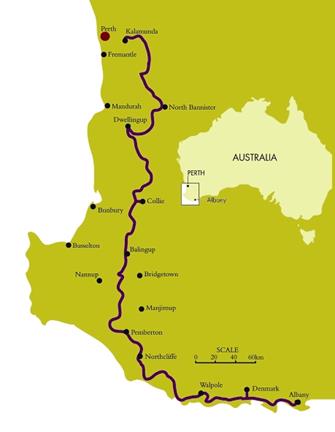 It's difficult to know where to start in describing such an epic hike but at the beginning seems the most logical place. The Bibbulmun Track was an idea originally conceived in the 1970's and finally became a reality in 1998. Since then, approximately 500 people have completed the entire distance and been inducted into the 'End 2 End' club. There's no doubt it's a long way to walk. Although it only covers a small corner of Australia, if it was in Europe it would stretch from Paris to Rome! So, it was with that rather daunting knowledge that I tentatively set out on a hot day in early February. 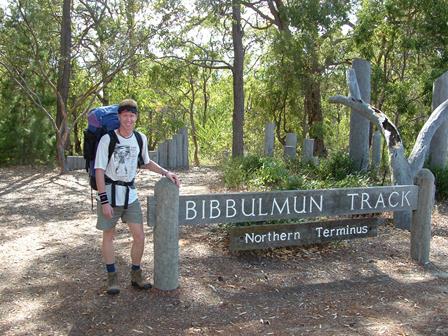 At the Northern Terminus

When I reflect on the entire time I spent hiking the track, I think the first few days were the toughest of all. There is nothing quite like the challenge of carrying a heavy pack over difficult terrain in 40 degree heat. Although the track goes through eight towns, the first one is ten days from Perth. So, my pack was very heavy with supplies and I was stiff and sore during those initial stages. But as I progressed, my muscles began to get attuned to what was expected, my pack gradually lightened and things became easier.

The facilities along the way are truly world class. I spent seven weeks walking and averaged about 20km per day. I wasn't carrying a tent so had to rely on the track campsites. These are basically three-sided structures that offered hardboard platforms for sleeping and a couple of picnic tables for eating etc. Most of them are in beautiful locations that have been pleasantly landscaped with a bush toilet and flat areas for pitching tents if required. They all have a large rainwater tank so, although I was hiking in a relatively dry period, I always had plenty of water available. 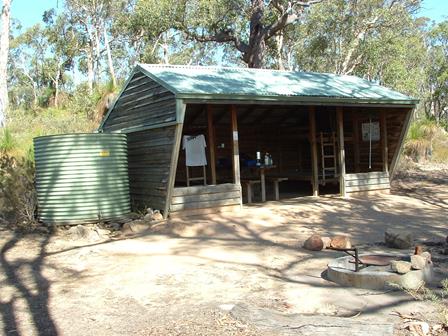 Typical campsite in the northern section

During the first four days the campsites were only about 10km apart so I 'double-hutted' through that section. After that, they were anywhere from 13km to 24km apart. I did a few more double hut days later in the hike where I totaled about 30km for the day. The shelters in the northern half of the track all had fireplaces but I couldn't use them because of a total fire ban. Sadly, I did come through a couple of areas that were affected by bushfires but in all honesty the damage wasn't as bad as I expected. I'd describe it as 'superficial' with blackened tree trunks and burnt leaves but still a lot of green foliage.

Initially, the scenery didn't change greatly from day to day. It was characterised by forests of jarrah and marri trees, granite outcrops and various native bushes. February is a hot, dry month in Western Australia and most days were spent under blue skies and sun. The trees offered some protection from the sun as I walked and I always appreciated any shade I could get.

Canning River in the Jarrah forest

After a couple of weeks I started to follow a river for the first time. Unfortunately at this time of year the water levels were very low and barely flowing in most places. This was the same for other rivers along the track but it was pleasant hiking though the valleys anyway. There were variations in the flora around this area as one day I enjoyed the sight of paperbark trees, gum trees and swamp vegetation. A couple of days later the track climbed across private farm land and offered great pastoral views.

The scenery in this whole northern area would have been greatly enhanced if the Western Australian wildflowers were in bloom. Unfortunately, spring is the season for these displays so I missed this aspect of the hike. However, doing the track at this time means plodding (and wading at times) though water and swamp mud. It also means sharing the track with many more people and not experiencing the same tranquility I enjoyed. So, with all are pros and cons, I certainly have no regrets about my timing.