ULURU AND THE OLGAS


After the climb we visited the Aboriginal Cultural Centre and then to the sunset viewing area. We joined in a large collection of cars, campers and people with their cameras ready. This was more than a sunset; this was an event! The evening sun illuminated the rock in a deep orange colour which then became a series of deep reds. As the sun set over the horizon behind us, it transformed again into a faded brown colour and the sky filled with different colours behind it. It was an majestic and truly unforgettable sight. 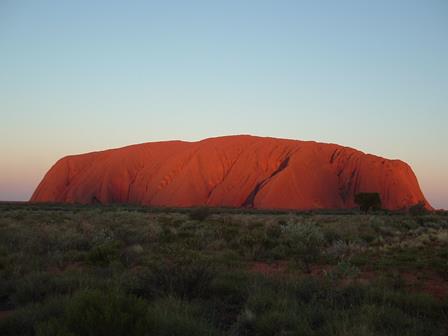 We stayed at a campground about 20km from the rock so that we could return for sunrise in the morning. We nearly missed it because of a flat battery but just made it after some frantic asking around and nifty work with some jumper leads. The early morning sun creates similar colour patterns to the evening, but in reverse order and on the opposite side. There was another crowd there to witness the new day dawning and after getting our photos we had breakfast and prepared for the 10km base walk. 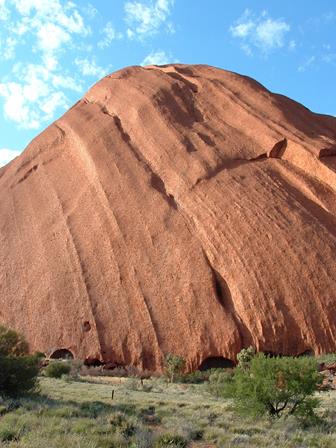 The hike around the base of the rock offered great views of its contoured surface, Aboriginal artwork and culturally significant sites such as caves. It was even more impressive in the knowledge that about two-thirds of the rock is believed to be lying under the sand! It took about two hours to complete the 10km walk but a couple of people nursing a hangover decided that sleeping in the car was a better option! At mid-morning we left for Kata-Tjuta (The Olgas) - one of the few drives that we actually completed in under an hour!

The Olgas are a striking group of domed rocks huddled together to form deep valleys and steep-sided gorges. There are two walks at the Olgas so after quickly doing the 2.6km Walpa Gorge Trail, I then hiked the longer 7.5km Valley of the Winds. There are a couple of lookout points that offered wonderful views and some great photo opportunities of the unique landscape. It was only towards the end that I realised walking 20km in the desert after drinking cask wine till 3am is not that easy! 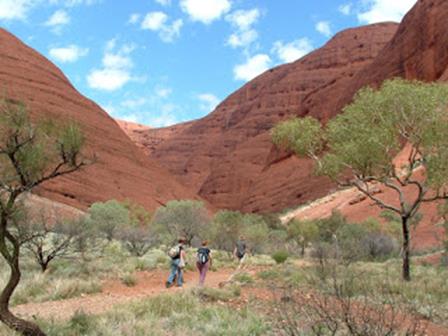 Valley of the Winds, Kata-Tjuta

That was the final stop of our tour and we set an immediate course back to Alice Springs. Our original plan was to camp somewhere along the way but the general opinion was that everyone was just too tired and wanted a real bed! So I drove a quiet, but very content little group the 450km back to our hostel where a hot shower and restaurant meal was oh so good!