I'm writing from an internet cafe in the heart of Agra. The slightly stale air is being cooled by a fan and it's a refuge from the heat and noise of this bustling and chaotic city...

Well, India...wow, what an extraordinary country this is! I hardly know where to start in my description of it. I've only been here five days and it seems like a month. It's a quite bewildering and unique experience but I'm loving it! As I imagined, it constantly engages all your senses and there's always something to catch your eye, nose or imagination. Several times I've caught myself looking in wonder, admiration or sheer curiosity at sights which are simply a part everyday life here.

Delhi is an amazing city and probably a good representation of India itself. The first (and probably lasting) impression I had is how busy it is. Driving, or simply being a passenger (I don't know if I'd be brave enough to drive here!) the city streets is an experience to write about in itself. All the stories are true - the cows do wander in the streets and it's often not limited to just the bovine creatures. 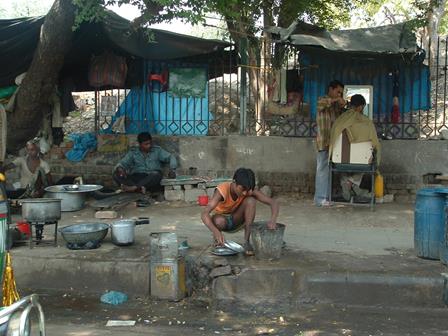 The streets are a combination of Old McDonalds Farm and a safari adventure. Honestly, I've seen cows, horses, goats, pigs and dogs in the inner city streets and on the road to Agra there were elephants and camels. I've even seen a few monkeys but the animal life is just the half of it. It's the vehicles that really make life exciting!

Sharing these crowded and polluted streets are cars, trucks, buses, motorcycles, rickshaws, auto-rickshaws, bicycles and pedestrians. Somehow, all these modes of transport co-exist and make their way around. To be honest, I don't know how sometimes. The smallest gaps between vehicles are exploited and I quickly learned that health and safety is a very low priority in these parts. What we consider dangerous and crazy is perfectly normal day our Indian friends. 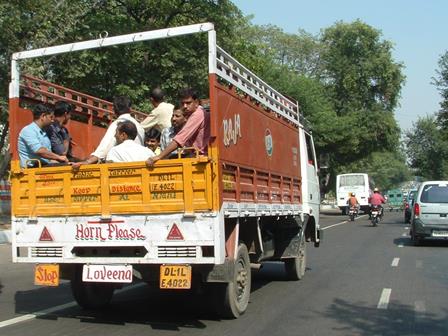 Indians themselves are a curious mix of being extremely friendly and helpful while at the same time wanting to extract every rupee from you they can. I think knowing which agenda they are focusing on is a key to successful travel in this country. It began as soon as I stepped from the plane with a charming taxi driver offering to take me to the city for 650 rupees ($19). I told him I'd think about his offer.

Another thing I've discovered about Indians is that they find it very difficult to accept NO as an answer. So, after I virtually detached myself from the driver I was approached by another man saying he worked for the Tourism Office and asked if he could help me. I explained that I'd like to go into the city in a taxi. He quickly offered to arrange a driver for 200 rupees ($6). I told him that sounds fine and within a few minutes the driver was waiting for me...the very same man who had just tried to rip me off!! 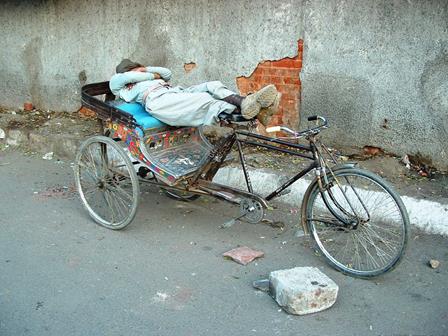 The story goes on to trying to get a hotel for the night. After I'd paid his fare, I had a total of 1000 rupees left. After he'd taken me to three hotels I still hadn't found a place to stay. They each wanted between 1200 and 1600 rupees - no less. Eventually at nearly midnight the driver offered to get a hotel for my 1000 rupees limit so we went back to where we'd been in the first place!! Madness...and a rip off but it was late and I was in a country I'd never been before.

Hopefully the light of a new day would bring with it some sanity...


← Back to Alluring Adventures → Delhi and Agra