I went to the tourist office the following day and they arranged a cheaper hotel for 500 rupees (which was one of the ones that wanted 1200 rupees the night before!) and a car/driver for me. They claimed to be an office of the Indian government but to be quite honest I had difficulty trusting them completely. I think they are an independent company and receive commission from various shops and hotels. But that aside, they were very friendly and I was driven around for the next couple of days for only 700 rupees ($21 AUD).

When I was planning my trip, I didn't realise that it's festival time here in India. This means that many trains and buses between various cities are fully booked. In fact when I asked the tourist office to book me a ticket to Agra they advised everything was fully booked for the next four days. In hindsight perhaps I was naive but I took their word for it and accepted a package they put together for me. For $300 I received a car/driver to take me to Agra, sightseeing there the following day, 2 nights accommodation and my train ticket to Gorakhpur. 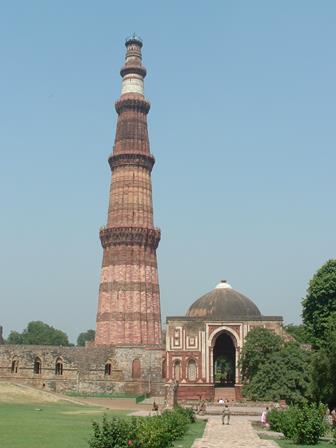 It was a long trip down to Agra. It took about three times as long as it would to drive the same distance in most countries. Our car shared the 'highway' with the various types of transport and animals so it was never boring. There is always plenty to see and shake your head in wonder at. If my trip continues like this I'll be exhausted but extremely happy by the time I'm finished!

In both Delhi and Agra I've seen virtually all the significant historic sites. Both cities have a huge fort together with various mosques and tombs. In fact, I've seen so many structures made from red sandstone and white marble that one was starting to look a little bit like the next! But that doesn't take anything away from their individual beauty and majesty. They really are awesome sights with an amazing history. The Qutab Minar for example is the highest stone tower (72m) in India and was built in 1193! 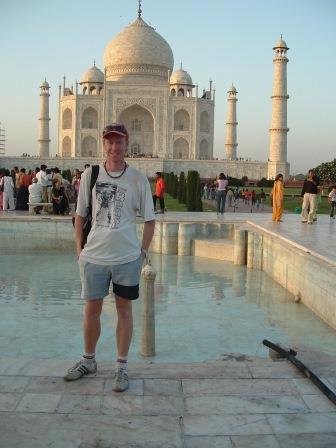 The highlight of the sights I've seen would obviously have to be the Taj Mahal. I went there yesterday at about 3.30pm and stayed till it was dark. It was a magic experience and one I'll treasure always. I'm not sure I can really find words to describe its beauty and elegance but it truly is the jewel in India's crown and one of the world's great sights.

I have a little travel buddy that I photograph everywhere I go. He's a little toy dog called Elvis. At the Taj Mahal I had him placed on a seat ready for the photo when I heard men shouting at me. I looked up to see armed soldiers approaching, speaking loudly in Hindu and pointing at me. I put my arms in the air and assumed I was in a prohibited place. But it was Elvis and they explained to me in broken English 'no toys, no toys!' So, I apologised, put him away and discreetly took a photo later out of their sight! Got the fright of his life he did…