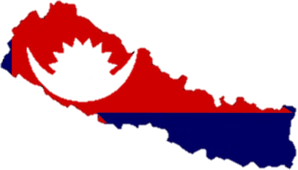 
From Chomrong, it was a two day hike up the Modi Khola to reach ABC. There is no doubt that this was the highlight of my entire trek and I'm so pleased that I decided to add it on. At 4100m it was freezing cold but the scenery totally made up for it in a spectacular way. The best way I can describe it is like being in an alpine amphitheatre. You are completely surrounded by the Himalayan mountains and it's almost like they are at arms length. You are so close to them!

I got up just before dawn to watch the sunrise. It was beautiful and clear (the general weather pattern in the Annapurna area is that the mornings are fine and cloud tends to roll in as the day goes on) but bitterly cold (about -4C). I had to take my gloves off to use my camera and within minutes my hands were hurting with the cold. I got some photos and then had to retreat into the lodge and thaw out. From there I had a big day all the way back to Chomrong (to enjoy what was the best hot shower of the whole trek) 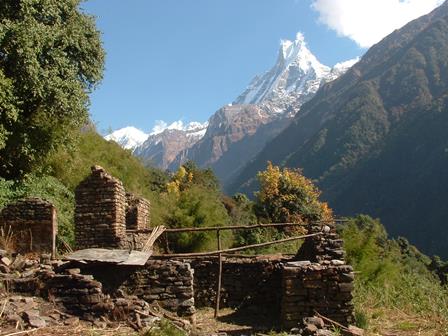 I could have finished a day earlier if I wanted but decided to just relax and have two shorter days. Enjoy the warmer weather and take time to observe the Nepalese people in their daily lives again. While I had a wonderful time, I was starting to feel a bit jaded after 19 days walking so it was a nice feeling getting on the bus at Phedi, knowing that I'd just completed my dream of trekking in Nepal. I'd got through without any injury and aside from a little bout of diahorrea and stomach cramps in Manang, in good health.

As I expected, I encountered the Maoists near a village called Jagat on my second day. After speaking to a number of people, I didn't have any fear of them when I arrived at their check point. When they asked me for 2,000 rupees I decided that I was going to have a chat with them about their tax. I explained that I'm from New Zealand and that my country has given the Annapurna Conservation Area of Nepal a lot of money to establish a number of safe drinking water stations which have virtually eliminated the problem of plastic bottles being left on the trail. I also mentioned the work that the late Sir Edmund Hilary did in establishing educational and medial facilities in Nepal. In the end they charged me only 1,000 rupees. 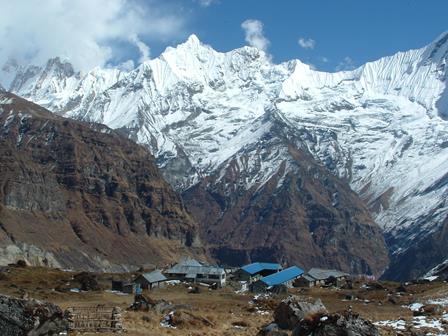 In Australian dollars the difference isn't a lot but there is a principle involved. I decided that the least amount of money I can leave with them the better. They are basically using the money to arm themselves and create conflict in a country where people are inherently peaceful and want to live in harmony. So I felt like I'd won a small moral victory toward that. I encountered them again on my penultimate day but when I showed my receipt they thanked me very much and wished me a happy day. Even the Maoists have the Nepalese charm...

In some ways trekking as I have been in Nepal is easy. What I mean by that is when you have finished walking and chosen a lodge to stay at you don't have to worry about anything else. You have a comfortable bed and happy in the knowledge that you'll receive a hot meal and don't have to do the dishes. For the limited facilities some guest houses have they have the ability to produce a wonderful variety of food. The menus have been designed by a tourism sub-committee with the help of nutritionists. 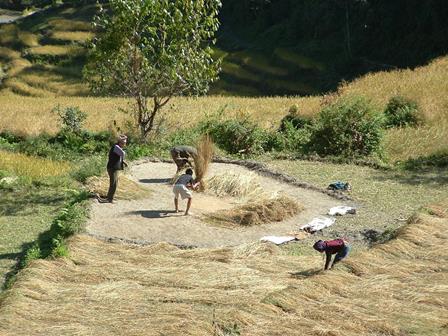 Most places you can choose between soup, rice, noodles, pasta, potato dishes and even specialty dishes like Mexican or Japanese. If that's not enough there is a choice of desserts as well. In the morning you can have porridge, cereals, breads, pancakes and a variety of different teas or coffee. The teas are great; black, lemon, mint, ginger, herbal...and some local brews. So, quality food was never a problem and you always set out walking feeling good.

The local Nepalese dish is called Dal (soup) Bhat (rice). It is served on a large stainless steel platter and has rice, some curried vegetables and a bowl of lentil soup with a good quantity of garlic. It probably doesn't sound that tasty but to be honest I really enjoyed it. I decided that if that's what the porters eat (two or even three times a day) then it's good enough for me! I also discovered that it's a best thing to order if you are hungry because they have no hesitation in refilling the dal, bhat or vegetables whenever you like. Like an endless buffet! 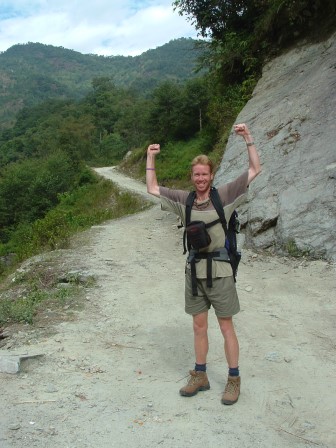 Exhausted but delighted at Phedi

The lodges themselves varied but were all of a reasonable standard. The best place I had was in a place called Marpha. For $1 a night I had a spacious room with carpet and the rare opportunity to recharge my camera batteries. It also had hot running water in the bathroom and was the only place where I had a shave on the trek. On the other hand, the worst place was probably in a village called Deorali up in the Sanctuary. It was cold and my room was like literally like an old gaol cell (stone walls and floor), complete with bars across the windows. But the people were very friendly so I enjoyed my stay.

So...there you go. Hopefully that's given you some idea what it's like to trek in the Annapurna area of Nepal. I've had a great time and would recommend it to anyone who was contemplating it. Just don't underestimate what is involved. There were times my fitness and strength were tested, especially at altitude. It was easier for the many trekkers who had a porter to carry most of their things but it's still a long way to walk over some difficult terrain. And as I've said, it is very cold in some parts and you need to be prepared. But with all that in mind it's a wonderful experience and I would do something similar again given the opportunity.