Another excursion from the main trail was to Lake Will, which gave great views of the uniquely shaped Barn Bluff mountain. The track hasn't been extended all the way yet so we blazed our own trail down to the end of the lake to the lovely Innes waterfall. The D'Alton, Fergusson and Hartnett Falls were other highlights of the track. The warm days enabled me to go for a swim in Lake Windemere. The water was cold but very refreshing and it's a naturally beautiful place. 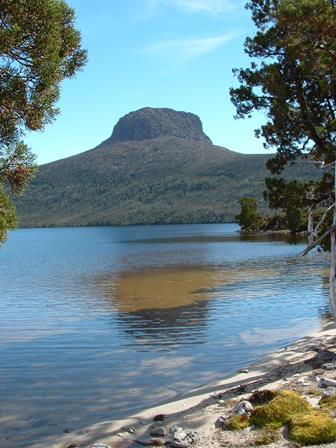 Lake Will and Barn Bluff

The Australian wildlife along the way was varied and interesting. On the very first day, a wombat casually wandered across the track in front of us. At one of the huts I met the friendly spotted quoll who lives there. Another hut had a couple of very tame wallabies and on the track we saw dozens of little lizards and a few olive green snakes about a foot long. Possums are very bold in their endeavours to get food and we saw a few of them around the huts along the way. 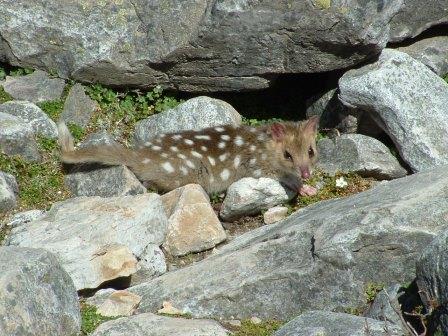 The ultimate sight would have been a Tasmanian Devil, but they are a nocturnal animal and difficult to spot during the day. I’d get to see one at a wildlife park later on my travels around Tasmania. I didn’t get to see a Tasmanian Tiger either. Not that I expected to because the last known tiger died in captivity in 1936. Although it has officially been declared extinct, occasional 'sightings' and blurry photos keep the intrigue and mystery alive.

From Narcissus Hut at the north end of Lake St Clair, there is a choice of doing the five hour walk around Cynthia Bay to the end or catch the ferry down the lake. We pushed on to spend our final night at little Echo Point hut and only had a three hour hike to complete about 100km though some of Australia’s most beautiful scenery. Although the skies were heavy and grey, it was a nice feeling strolling out with a much lighter load in our backpacks than we started with a week earlier. 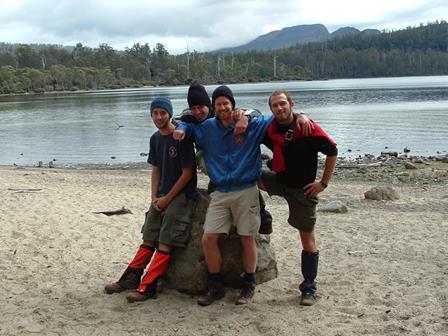 With the various side trips up mountain peaks and across to lakes and waterfalls it was physically challenging but I finished with nothing more than a few scratches and a small blister. Although they were generally full of snoring hikers and smelly socks, the huts were good along the way. Each one had timber platforms that are used by those carrying a tent. We made do with just our sleeping bags and a foam mat to place on the hardwood bunks. As the warmth from the day dissipated into the cool of the night my only regret was how light my summer sleep bag was! 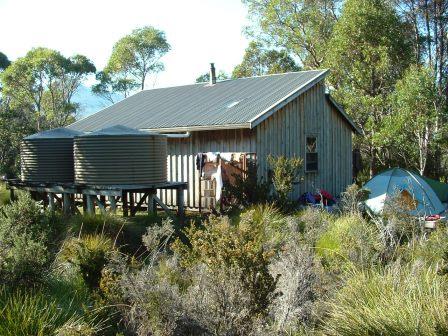 So overall we covered the whole track except for the excursion up what is known as Pine Valley. This leads on to areas known as the Labyrinth and Acropolis. While I'd loved to done that, time didn't allow and I was very happy to see what we had in the seven days. I think we were also pretty happy to see the Lake St Clair Visitor Centre and have a hot meal before we hitched a ride back to Launceston.