Near the village of Dalhousie in the Sri Lankan hill country is a lofty mountain that soars to 2,243m has sparked the imagination of pilgrims here for centuries. It is variously known as Adam’s Peak (the place where Adam first set foot on earth after being cast out of heaven) Sri Pada (sacred footprint left by the Buddha as he headed towards paradise) or Samanalakande (meaning Butterfly Mountain). Some even believe that the huge ‘footprint’ that crowns the peak to be that of St Thomas who I wrote about previously. 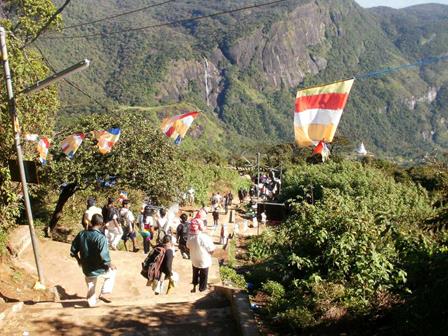 The path up Adam's Peak

The idea of climbing Adam’s Peak is to hike through the early hours of the morning and reach the summit just before sunrise. This is the fourth time I’ve done a predawn hike so I’m familiar with the idea but wasn’t quite prepared for what this particular day would bring! Climbing the 5,200 steps to the top takes between 2.5 and 4 hours, depending on how quickly you walk and how many rest stops you make. I decided that leaving about 3.30am would get me to the top in good time because I didn’t want to arrive too early and stand around getting cold. I also rather like sleeping at night.

The path is well illuminated by street lamps and tea shops that seem to stay open all night. I passed many people along the way and everything was going fine for the first two thirds of the way. It was then that I caught up to the mass of people who had started earlier and progress was badly hindered. Then I literally ground to a halt behind the massive line of people. So there we all were – unable to move in any direction. For some reason a trickle of people were coming down the mountain but most were waiting in vain to ascend. 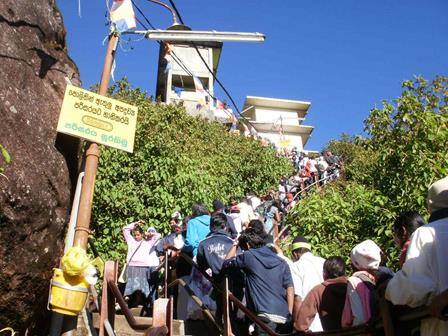 The painfully slow push to the top!

Slowly and painfully we moved forward. The idea of getting to the top for sunrise was gone – it was now a question of whether I’d get to the top at all! It was a circus and I honestly couldn’t believe how many people were on that mountain. There must have been thousands. Shortly after daybreak I passed a couple of tourists coming down. They told me they were giving up and suggested I do likewise. But I’m not that easily beaten and kept going even though the reality suggested only a slim hope of getting to the top and down again in a reasonable time.

Fortunately I had some luck in finding an alternative route that relatively few people were using. It detoured around the summit and joined with another path that also led up the peak. I could suddenly throw off the shackles and walk at full pace again! At 7am I joined the throngs of people at the temple on top of Adam’s Peak. It would have been an exciting feeling anyway but after all the problems and uncertainty, being able to take in the stunning vista was really exhilarating. 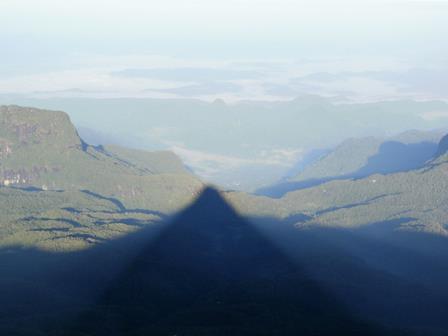 The best part of the panorama was seeing the perfect triangle shadow that the mountain throws onto hills below. As the sun rises, this shadow retracts back towards the peak and eventually disappears into the base. I didn’t wait for that to happen because the sun was already starting to heat the day and I had the long hike down to complete yet. It’s for that reason that I didn’t join the huge line to enter the temple where people go to worship the sacred footprint. I was quite content with just getting to the top!

On the way down I passed a tourist waiting in line. It was 8am and she had started walking at 1am. I estimate that from where she was it would have taken another two hours to reach the temple. Nine hours in total! Back in my guesthouse I talked to a group of three who had failed to make it so relatively speaking my day had gone very well indeed. The hike down in the morning sun passes some pretty sights that were previously obscured by the darkness. There is an ornate stone entrance arch, Japanese friendship pagoda, a waterfall and of course majestic views looking back at the mountain itself. 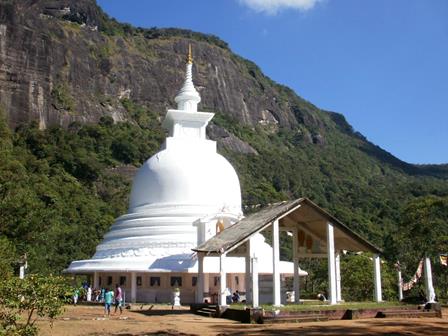 After a refreshing shower and some breakfast, I was on a bus back to Hatton and on to the town of Nuwara Eliya. This is a journey where you can really appreciate that travel is slow in Sri Lanka. The jade green hill country doesn’t cease to capture the imagination with its serene beauty. The area overlooking the crystalline Castlereigh Reservoir is just gorgeous. Nuwara Eliya sits at an altitude of about 1,900 metres and it’s a spectacular climb up a winding road past various vegetable market stalls.