Having been to the most westerly point of mainland Australia, the most easterly point of Byron Bay was added to my bucket list. So with a friend and a rental car, we headed south for a long weekend. Before crossing the New South Wales border, we passed through the playground that is the Gold Coast beaches. At the centre of it all is the famous Surfers Paradise where the party scene is as much an attraction as the sand. Despite the name, the surfers are drawn to other beaches further down the coast but lifeguards are always kept busy with swimmers, especially on summer weekends.

Tweed Heads marks the border between the two states at which point we turned inland and headed into the northern New South Wales hinterland. The undulating landscape down here is a blanket of lush rainforest, pastoral lands, orchards and eucalypt trees that are traversed by pretty winding roads. Our destination was the elaborately named Wollumbin-Mount Warning National Park and despite a few showers coming through the Gold Coast, our goal was to climb Mount Warning itself. 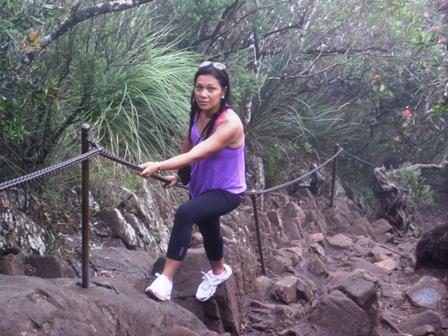 Named by Captain Cook (to avoid the rocky Point Danger on the New South Wales coastline), Mount Warning was once the central magma chamber of a massive 4,000 sq km volcano. Today, the ancient caldera is known as a centre of spiritual energy and is sacred to the Aboriginal people. Much of the 4.5km hike to the summit (1157m) rises gently through rainforest but the final 400 metres is a boulder scramble using a chain to haul yourself to the top. We made the return hike in only three hours, but unfortunately the magnificent views were obscured at the top by thick cloud. 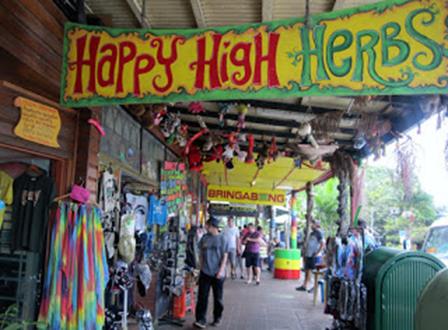 While in the area, we took the opportunity to visit the strange little town of Nimbin. Since a music festival in 1973, Nimbin has been synonymous with hippies, marijuana and alternative lifestyle. The brightly coloured buildings along the quiet main street add to the unique vibe created by the people we met there. It has an interesting art scene where creativity often through marijuana. It’s not legal in Nimbin more than anywhere else in the country but police tend to turn a blind eye. So we sat down with a coffee and special cookie to enjoy the dreadlocked and tie-dyed world going around. 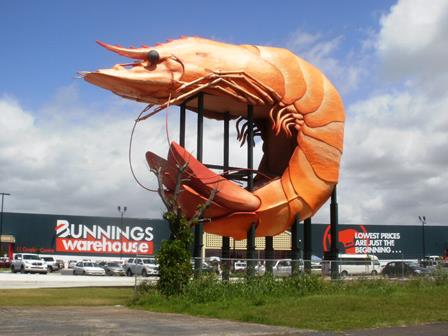 We stayed the night in Lismore which is the hinterland’s main commercial centre. Sitting on the Wilson River, it has various heritage listed and art deco buildings including a hotel that Queen Elizabeth II once stayed at. After a look around the town we followed the walking track along the river back to the car and set a course for Ballina at the mouth of the Richmond River. It’s a reasonable size town that finds itself caught halfway between being a commercial centre and a tourist destination. Either way, it’s renowned as the home of the Big Prawn.

Just north of Ballina, Bryon Bay doesn’t have any kind of identity predicament. With surf breaks, beaches, dining and nightlife, it is one of the premier travel destinations of the east coast. For even the cynical or travel weary, it’s hard not to be charmed here and many find themselves staying longer than planned. Unfortunately our stay was limited to just the afternoon but we certainly made the most of it. 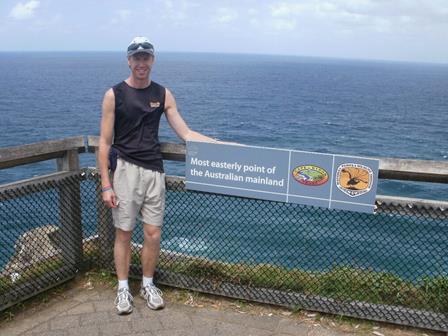 Cape Byron, the most easterly point of Australia

The edge of Cape Byron is the most easterly point of Australia and we arrived here after following the walkway that ribbons around the headland. Towering over the cape is the historic lighthouse built in 1901. After having a look inside, we continued on the Cape Bryon Walking Track until it led us through the State Conservation Park and the picturesque Captain Cook Lookout. We stopped to visit a friend in Kingscliff near the Queensland border where he proudly showed me his ‘backyard’ of the northernmost beach in New South Wales.