Although it has a rather unfortunate name, the city of Mysore bowls you over with its flamboyant royal heritage and bustling markets. After a five hour bus journey and finding accommodation there wasn’t much time for sightseeing but I did get to see places like the stately Government House (1805), Memorial Hall (1884), and the beautiful neo-Gothic cathedral built between 1933 and 1941. I finished my day at the Devarjara Market which sells traditional items such as spices, sandalwood, incense and flower garlands that many women wear in their hair each day. 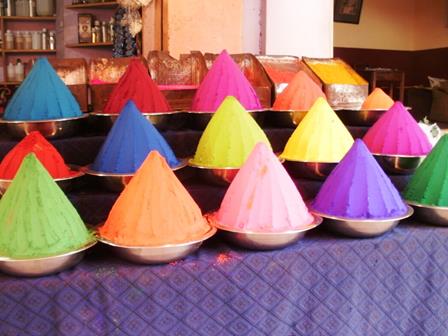 Spices of the Devarjara Market

The rail museum was an interesting diversion but the highlight of the city is undoubtedly the fantastic Mysore Palace. It is among the grandest of India’s royal buildings and certainly one of the most amazing places I’ve visited. The original palace was constructed of wood and gutted by fire in 1897. The current one was completed in 1912 with no expense spared! It was designed by an English architect in what is known as Indo-Saracenic style. This means that there are several influences in the design such as Hindu and colonial European. 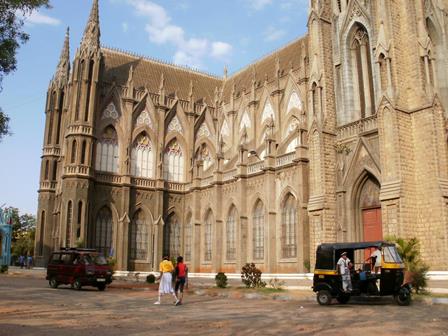 It is impressive from the outside but the interior is an absolute marvel of stained glass, mirrors, carved wooden doors (some with ivory inlay designs) and ceiling panels, beautiful paintings and mosaic floors. Several rooms are adorned with a fine collection of furniture, sculptures and royal artefacts. It’s one of the most lavish places I’ve ever been and a great insight into how the rulers of Mysore lived. It seems they didn’t want for anything! The palace administration of today is well organised with headsets available in several different languages for tourists at no additional charge. That made the whole experience even better. 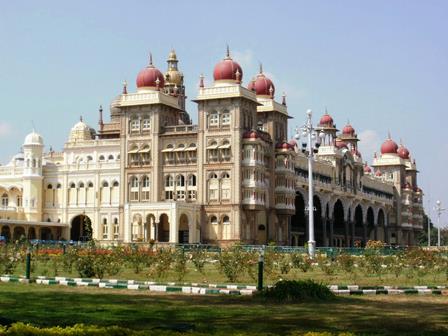 I had an extra day up my sleeve so used it for a trip up Chamundi Hill which is the ever present landmark to the south of the city. There is a large temple atop this hill but I found the whole place a bit of a tourist trap to be honest. I refused to pay the exorbitant entry fee and admired the towering gopuram (entrance gate) from the outside. I don’t imagine the inside could be that different to what I’ve already seen in south India. I then made my escape before the roving vendors could ask if I wanted to buy any of their goods.

After getting the bus up the hill, I descended using the steps that many pilgrims use to get up to the temple. About a third of the way down is a huge statue of the Hindu bull deity Nandi that was carved out of solid rock in 1659. The walk was also interesting for those I encountered along the way. There was a man singing for all he was worth as he made his way down and there were several people stooping to mark every step on the way up with a red powder. There are 1,000 of them altogether so my guess is they reached the temple with a sore back! 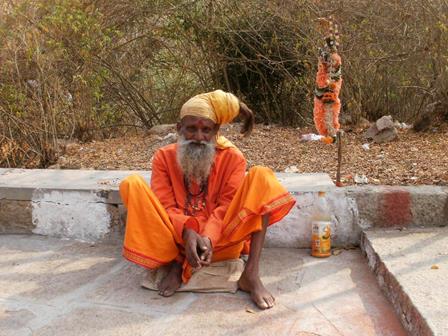 Meeting the locals on Chamundi Hill

I visited an art gallery that displayed a range of masks with explanations on their significance to the cultures they belong to. After that it was off to the Mysore Zoo which is set in pretty gardens on the edge of the city. It dates from 1892 but has a reasonably modern feel to it. Relatively speaking, the wide range of animals, birds and reptiles are in good enclosures and well cared for. So, it was a pleasant way to conclude my time there and head to my final Indian destination of Bangalore.