After the Overland Track we got a rental car to see as much of the island as we could in ten days. Our very first destination was Ross - a sleepy but fascinating little place about an hour south of Launceston. Originally established in 1812 as a garrison town to protect travellers from bush rangers, it is rich in history and colonial charm. It is probably most famous for its bridge built by convicts in 1836. It is the oldest in Tasmania and third-oldest in all of Australia. Many of the buildings of the same era are now cafes and craft shops. 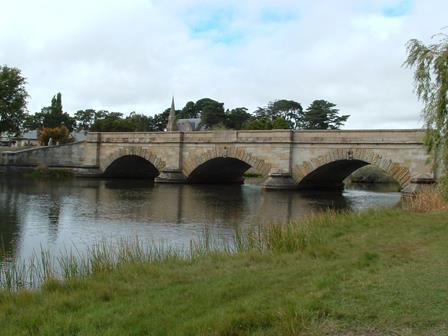 From there, we went to the pretty fishing port of Bicheno on the north-east coast. We walked part of the 3km foreshore footway which starts at a blowhole in the rocks and works its way around past an old whaling station and a couple of beaches. Our destination for the day was Freycinet Peninsula and we arrived at the Coles Bay Visitor Centre late in the afternoon. It was time to put the hiking boots on again and explore the beautiful Freycinet National Park.

There was just enough time to hike the coastal track to Hazards Beach and although the day had been cloudy, it cleared nicely as we set up the tent. We camped at the south end of the beach and the night in the tent wasn't a good one. We got a few hours rain and the fearless possums got into our food supply. Fortunately we still had enough to see us through the next day and what a spectacular day it was! 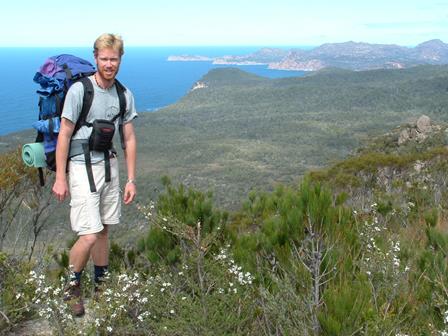 The rain had stopped by the time we awoke and the day improved to a warm, sunny afternoon. From our campsite on the west coast of the peninsula, we walked down to Cooks Beach and then had a five hour hike up and around the granite peaks of the Freycinet and Graham mountain ranges. This track offered magnificent views down to the end of the Peninsula and back across to Hazards Beach. 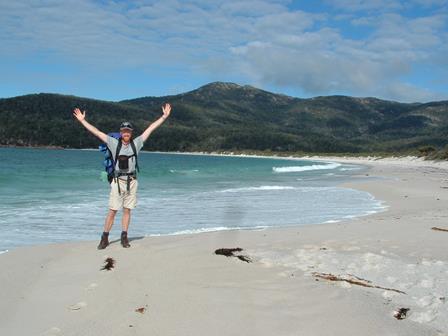 The white sands of Wineglass Bay

Wineglass Bay was the highlight of the Freycinet Peninsula. This is where the clear ocean waves crash onto a perfect semi-circle of white sand. Our first views of the bay were from up the mountain and the track led us down to the beach. After doing the 20-minute walk along sand we then hiked up to the lookout on the other side which gave us a spectacular view in the late afternoon sun. On the way out of the park we went to the lighthouse which gave us views of the bay entrance and also up the coast toward the Friendly Beaches. 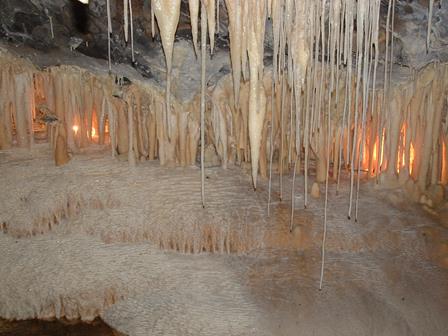 Back in our little rental car we travelled west to Deloraine and the Mole Creek National Park. We visited the Marapooka Caves in the park which had amazing limestone formations and glow-worms. We did a quick stop at the Alum Cliffs and then drove on to Sheffield. A nice little town characterised by a number of beautiful murals painted on the side of buildings. We took a walk along the beach in Burnie and then continued along the northern coast. After a long day, we finally made camp at Sisters Beach in the Rocky Cape National Park.