The islands off the western coast of Viti Levu are broadly divided into the Mamanuca and Yasawa Groups. I bought a 7-day boat pass for the Yasawa Flyer catamaran, chose six islands to visit and spent one night on each island. The islands I selected were Bounty (which is actually in the Mamanuca group but a popular stopover enroute to the Yasawas), Waya, Waya Lailai (lailai means small and is the island just south of Waya), Manta Ray, Nacula and Tavewa.

I wondered if some of the natural Fijian culture and traditions would be lost in the stream of tourists visiting the islands but it was all there in the welcome at Bounty Island. The Yasawa Flyer comes within a few hundred metres of each island at which point tourists are transferred onto a small boat. As it nears the shore, the resort staff are all there with a song and big 'Bula!' to welcome everyone to the island. We were then personally greeted with a smile and handshake and also farewelled in the same way when we left. 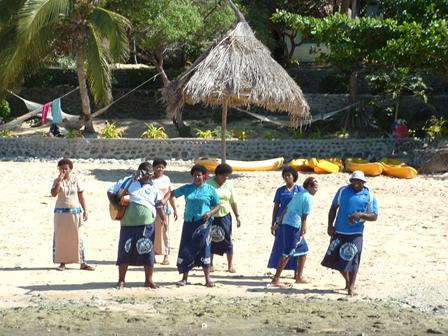 I had the overall feeling that Fijians have a genuine appreciation for tourists and want to give them an optimum experience. In most places the staff learned my name and would often use it. It was a nice feeling to come out for breakfast in the morning and be greeted with 'Bula Dave'. I was a little embarrassed on occasions when I couldn't remember their names in return but it was a nice touch on their behalf. They were also proud of and happy to share their culture with us.

This involved things like basket weaving demonstrations, learning the Bula Dance (which is reminiscent of the Macarena and lots of fun to do!) and trying the traditional drink called kava. Kava is the root of a type of pepper plant that has been dried and then crushed into a powder. It's then mixed with water in a ratio of about one teaspoon to one cup. The end result is a mildly narcotic drink that looks literally like muddy water. Despite its unappealing look, it tastes okay and after a few cups it gives the tongue a slightly furry feeling. We learned the etiquette which involves clapping once, saying 'Bula' (cheers) drinking the cup in one go and clapping three times in gratification. 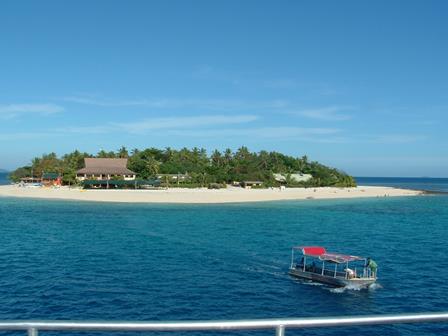 Arriving at the tiny Bounty Island

Bounty Island sits just 10km from Nadi and is a 20 hectare piece of paradise. It's lined with beach and surrounded by coral and tropical fish. A walk around the island takes about 20 minutes and paddling a kayak around took me about half an hour. The Yasawa Flyer comes through at the same time each day which gave me 24 hours on each island which was perfect for what I wanted to do. My days were spent swimming, snorkelling, kayaking and hiking. If there was time left after that I could just relax on the beach or in a hammock strung between a couple of palm trees. Most resorts organised beach volleyball later in the day when it wasn't so hot. 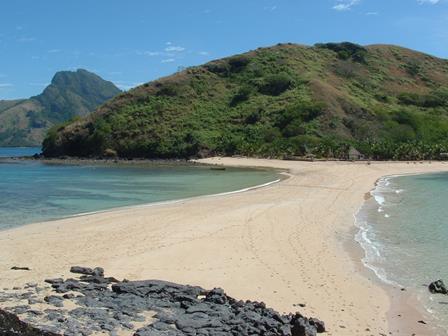 Waya Lailai and Waya were the best islands for hiking. They both had trails that lead up to great view points where I could see other islands and the coral reefs under amazingly blue water. The tracks weren't always easy to find and follow but it was all part of the fun. When we arrived at Waya, ten people disembarked and nine went to the resort on the southern point of the island. I was the only one destined for the other resort and when I arrived I found that I was the only one staying there! It was great...so peaceful with a whole bure (traditional Fijian building made from timber poles lashed together with coconut-fibre string with woven walls and a thatched roof) to myself. There was running water but no power so they gave me a lantern when it got dark.