Unawatuna itself is all about the beach but to be honest it’s not ideal for swimming, especially for tourists with young children. Waves crash in with surprising force and get sucked out again by an even stronger undertow. It can be fun though lying in the shallows and letting the water move you up and down the sand. I shouldn’t laugh but I watched the hilarious sight of a woman being knocked off balance by the water and as she stumbled around desperately trying to stay upright crashed into her husband sending them both into the surf!

Despite being a popular tourist destination, it’s an idyllic place and it’s difficult to imagine the horror that must have occurred on Boxing Day 2004. Although reconstruction happened faster here than any other place in Sri Lanka you can’t help but feel some mistakes have been made. Some of the guesthouses are so close to ocean that during big tides there’s almost no beach left in places because the water is virtually at their doorstep. With the subsequent erosion that is caused, they could be washed away a second time within a few years! 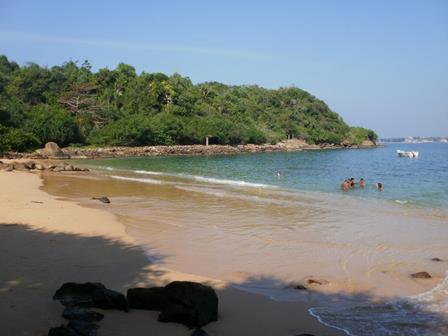 I did a hike over to more isolated Jungle Beach. As the name would suggest, it’s where lush green bush descends down a hill to meet a crescent of sand that warm, clear water gently laps onto. It’s a lovely place where I had a swim and sat under a palm tree for a while. This little touch of paradise isn’t exactly a well-kept secret though and as more people arrived I began my hike back. The walk took me past a huge white Peace Pagoda and a nearby temple adorned with large sitting and standing Buddha images.

This was a day where I wasn’t in a hurry and it gave me an insight into how delightful the Sri Lankan people are. The first man I met was a guesthouse owner with a remarkable knowledge of New Zealand so we chatted for a while sipping coconut milk from his fridge. When I lost my way going back through the jungle I asked a local man for some help. Before giving me directions he asked if I’d like to come in and have some tea with his wife and sister. They were a lovely family and although they wanted me to stay for some curry rice I had to keep going. 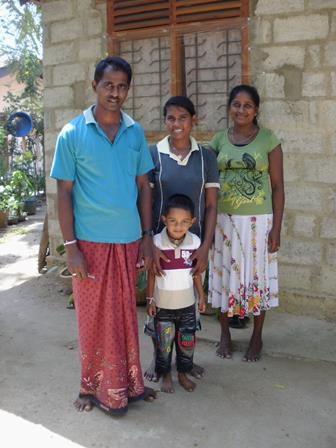 My destination was the interesting Weherahena Temple, a few kilometres from Matara. It’s most striking feature is the 39-metre high sitting Buddha that overlooks the complex from one end. It is huge and looks magnificent after a repaint just a few months ago. Aside from that, there is a large underground chamber and hallways adorned with numerous colourful murals along the walls and across the ceilings. It’s an extraordinary place to visit and made even better by being able to ascend the stairs behind the Buddha to a viewing platform near his head. 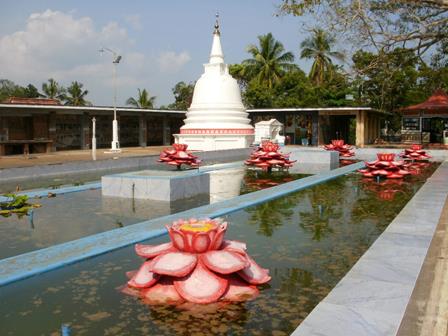 I finished my day at Mirissa Beach which is where I had considered staying a few days prior. It’s similar to Unawatuna but development seems to have been more respectful to the natural shoreline. As a result, there is a broader expanse of sand to enjoy and it has swaying palm trees along much of its length. I had another swim and by coincidence, met up with a couple that I’d previously spent time with in Haputale. We had dinner together before I caught one of the regular buses that ply the southern coastal road towards Galle.

My friends laughed when my dinner came out from the kitchen. From the pizza list that included sausage, ham, mushroom etc I chose pineapple. I thought it was a bit odd that they asked if I’d like honey on it but thought it seemed an interesting idea. When my meal arrived I just stared for a moment at what I’d been given. My ‘pizza’ was chunks of deep fried pineapple topped with vanilla ice cream! And the honey. It would have been a great dessert but I wanted real pizza that comes in a cardboard box and eaten while wearing pyjamas in front of the TV. 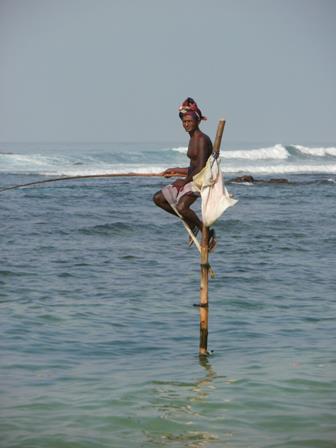 The following morning I visited the village of Koggala to see the iconic sight of the stilt fishermen. In this ancient fishing method, they sit on a cross bar called a petta which is attached to a vertical pole driven into the reef. Although it can't be very comfortable they sit holding their fishing rod in one hand and the pole with the other. Generally speaking, it is out of season and those that still do it generally use the very early morning or late afternoon. So I wasn't hopeful of seeing too much but I was fortunate to find one of them when I was there. He even reeled in a little fish while I stood and watched.