When I was living in Cairns, I added the World Heritage listed Fraser Island to my Australian bucket list. Unfortunately this largest sand island in the world (120km by 15km) hasn’t been ticked off yet but I can at least say I’ve seen it. On a trip north one day we visited the Great Sandy National Park on what is known as the Cooloola Coast. This park actually includes Fraser Island that we could see from Rainbow Beach and there were also nice views from Carlo Sandblow which is a huge 120m-high dune. 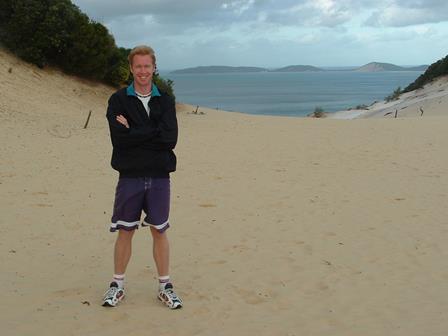 In was in the area that I decided to walk a 7km track along the path of an old telegraph line. It was late in the afternoon, starting to get gloomy and I was only wearing shorts and a t-shirt. I had about a kilometre to go when I lost the track. I tried to backtrack but suddenly I was disorientated and lost. Being winter, it was getting cold and I only had about 30 minutes of daylight left so I had to act quickly. I suddenly became very aware of how easy it would be to panic. All the trees looked the same and I couldn’t find any landmarks that I’d passed. 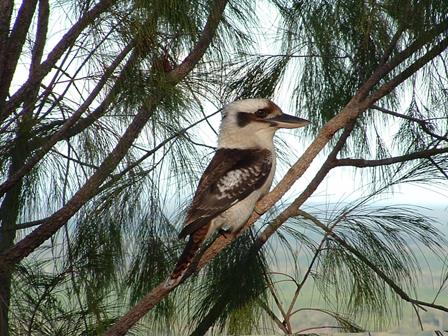 From the map in my pocket, I knew there was a road to my right but after turning in circles I didn’t even know which way was right. In the end I had to gamble on my instinct. I began pushing through the bush either getting closer to the road or further from it. Thoughts of an utterly miserable night flashed across my mind until the bush suddenly opened out onto a rather bumpy old road. At the car park my friend was waiting patiently in the car for me. I’m not sure who was more pleased to see who in the end! 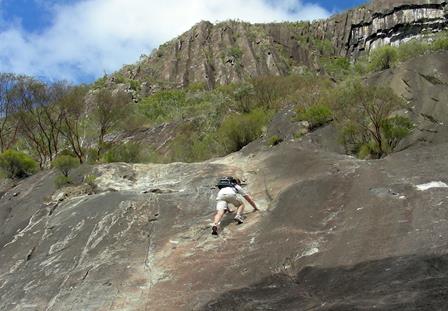 Climbing in the Glass House Mountains

For me, the highlight of the Sunshine Coast was our visit to the Glass House Mountains. Believed by Aborigines to be a family of mountain spirits, they are described by Lonely Planet as "13 ethereally shaped volcanic crags sticking up from the coastal plain". Small national parks surround six of these peaks. We visited three of them and also a lookout that offers panoramic views of all the mountains. 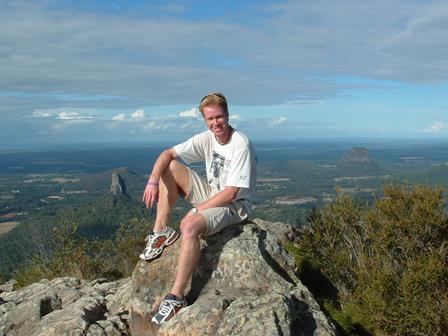 Standing at 556m, Mount Beerwah is the highest peak in the park. While this elevation isn't exactly in the clouds, it’s a tough climb! The brochure we had reads: "Suitable for experienced rock climbers only. Routes that lead to the summit have steep rocky sections and irregular surfaces with loose stones that require rock scrambling and some rock climbing skills." They weren't kidding and it’s not for the faint hearted! We also climbed Mount Ngungun (253m) and I finished the day with a couple of walks around Mount Tibrogargan.