The last week of my travels through northern India took me to the small town of Pushkar, Jaipur and finally back to New Delhi. Pushkar is a lovely town set beside a lake which is considered holy in the same way as the River Ganges in Varanasi. So, it is surrounded by ghats that are used for bathing, especially early in the morning. I loved my few days there for a few reasons. There wasn't a lot to do and it was a wonderful chance to relax, chat to other tourists and wander around the shops.

What really made it fun though was an extraordinary coincidence that happened the day I arrived. While looking for a guesthouse, I met Ben who was a friend of mine from Darwin. I had no idea he was in India! So, after nearly three months of travelling solo it was great to have someone to hang out with and exchange a few travel stories. 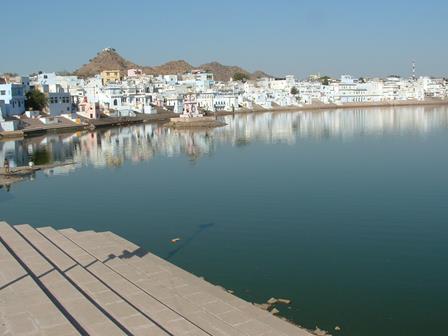 Steps of a bathing ghat, Pushkar

One thing we loved about Pushkar is the buffet meals. For 50 INR (about $1.50) restaurants offered all you can eat breakfast, lunch and dinner. Of course it's not something you could do three times a day but it was fantastic value once or twice. The breakfast was especially good and offered cereal, muesli, porridge, toast, fruit, pancakes, tea and coffee. Nothing deep fried, gooey sweet or spicy :-)

Ben changed his plans slightly and we travelled on to Jaipur together. While Jodhpur is the 'Blue city', Jaipur is India's 'Pink city'. To be perfectly honest though I think it's a misnomer. It's not really pink, even when viewed from the fort overlooking the city. The buildings of the old city are various other colours and perhaps there are a few pink among them but I was generally disappointed. That aside though, it's an interesting city with a lot of history. 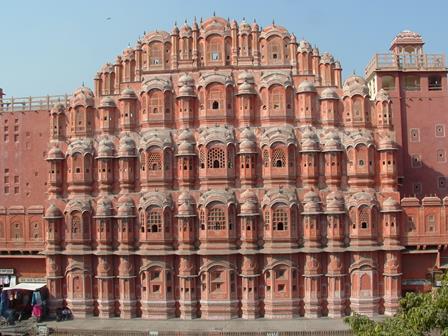 Palace of the Winds, Jaipur

One of the major tourist attractions is the Palace of the Winds which is an intriguing building. It is five stories of beautifully carved red sandstone but is essentially just a facade. The building behind isn't anywhere near as attractive as the front. Adjacent to the palace is an observatory that contains various sundials, one of which is 27 metres high. The shadow moves across it at 4 metres per hour so as long as it's sunny you get an accurate time of day.

I also visited the City Palace which contains the two largest silver vessels in the world. They contain 900 litres of liquid each and the story of their origin is an amusing one. The Marharaja of the day ordered them to be made before a trip to England. They were then filled with water from the River Ganges because he didn't trust the English water! Perhaps the Ganges wasn't quite so polluted back then... 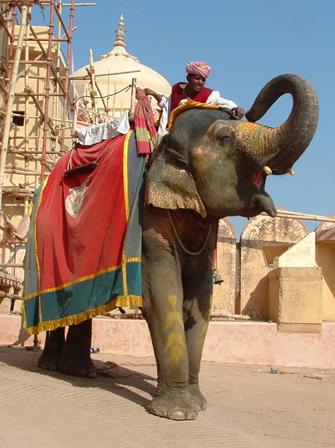 We took a walk up to the Tiger Fort overlooking the city but it didn't compare to the huge fort and palace that we visited the following day in Amber. This village is 11km from Jaipur and made a perfect day trip from the bustling city. It was built in 1592, in distinctly Rajput architecture with the usual royal extravagance and today is a major attraction for Indians and tourists alike. If you had a spare 400 rupees you could even take an elephant ride up the hill.

Ben was going to fly to Goa for Xmas/New Year but when he realised the cost of an air ticket was almost double at that time he decided to go back to Pushkar! I suggested Diu if he wanted to relax on the beach but he couldn't face the overland travel to get there. Can't really blame him! Pushkar is a holy place where meat, eggs and alcohol are banned. So, when I said goodbye to him at the bus station he had two bottles of rum packed very discreetly into his pack. I'm not sure exactly who was going to catch him...the alcohol police? The egg police on a quiet day...? 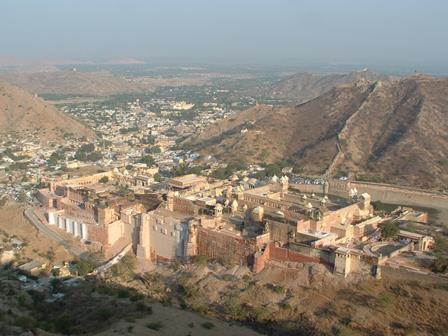 View of Amber from Tiger Fort

Anyway while he left on his smuggling run back to Pushkar I headed in the opposite direction to Delhi. My final Indian bus trip will be remembered for getting a puncture and once it was replaced having to share my seat with the old tyre. In fact I decided to stand rather than have the dirty old thing roll into me every time the bus veered left. To make my day I took what must be the most crowded bus in the whole of Delhi...number 729 that runs from the bus terminal to the railway station. I don't think I was able to exhale properly until I got off the bloody thing!

I stayed in shopping area called Main Bazaar (Market). There is a good selection of cheap hotels and after checking a few I realised that they were all of a very average standard. I chose the best what I could find, ignored the couple of cockroaches crawling across the concrete floor and lay back on the very firm mattress. As my feet dangled ungracefully off the end I began to reflect on the three months just past...