Nestled beside the Swan River, Perth is also the sunniest capital city of Australia. I worked to earn my keep at a hostel in the city which became my home for about a month. It was now autumn time so I did plenty of my sightseeing under beautiful blue skies and pleasant temperatures. Although it felt remote being on the far edge of Western Australia, I enjoyed my time in Perth. It’s a sophisticated and cosmopolitan city but the fine beaches and hinterland bush is an integral part of the relaxed lifestyle. 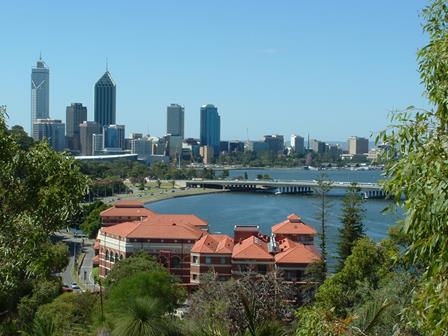 My city sightseeing began at the beautiful Kings Park Botanical Gardens. This bush-filled expanse offers wonderful views of the Perth skyline and in the heart of the park are the impressive botanical gardens. In spring it includes a display of the state’s wildflowers but there is plenty to enjoy at other times of the year. Aside from the city, the views from the park include the Canning River meeting the Swan River to form Matilda Bay before flowing out to the Indian Ocean at port city of Fremantle. 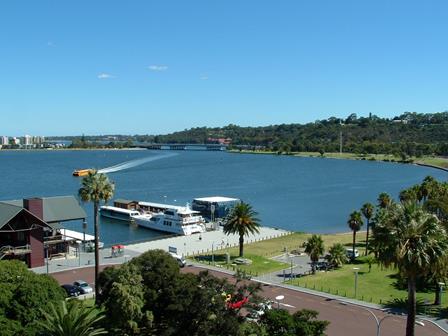 The paths along the Swan River make an ideal place for walking, jogging or cycling. In fact, on of the cycling routes extends all the way to Fremantle. I didn’t have access to a bike but I did several walks and developed a picturesque running circuit for myself around the river. I especially enjoyed the day I had exploring around the south bank of the river and returning to the city using the bridge over Heirisson Island. Later in the afternoon is a great time to see the resident kangaroos and wallabies here. 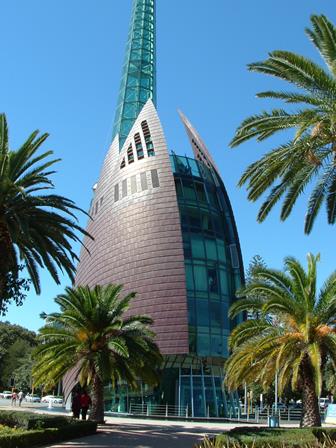 Back on the north bank of the river, the cycle path goes past the WACA which is the most important cricket ground in Western Australia. It then comes to the famous Bell Tower which is a pointy glass spire containing very old bells from England. The oldest of these dates back to 1550 and there are nice views of the river from the top of the tower. Just a few blocks away near the city centre are the state’s museum and art gallery. Both of these are free to visit and offer excellent displays that I spent hours admiring. The museum complex actually includes Perth’s original jail built in 1856.

No visit to Perth is quite complete without a visit to the beach and it’s hard to beat Cottesloe Beach on a sunny day. Just a few kilometres down the coast is Fremantle where there is much to enjoy. Aside from being a cosy home to buskers and artists, the primary attraction is probably the old convict-era prison that is now a World Heritage site. It was originally built by the first convicts in the mid 19th century and used until 1991. Inside the foreboding limestone walls there are both day and night tours that can be done. 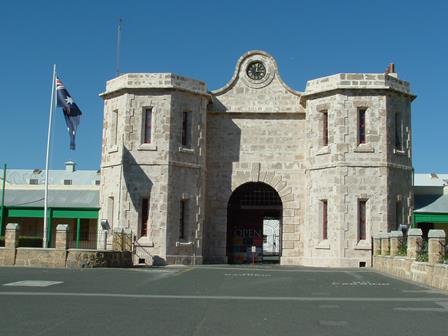 I love maritime museums and the one at Fremantle is a fascinating exploration of the region’s enduring relationship with the ocean. With only limited time, I had to give this museum a miss but did enjoy the shipwreck galleries of the nearby Western Australia Museum. This includes a section dedicated to the famous Dutch merchant ship Batavia that was wrecked off the coast here in 1629. Between these two museums is the Round House, which is an odd 12-sided stone prison that commenced in 1830 and is the oldest surviving building in WA. 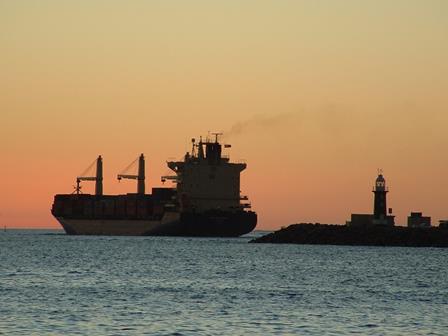 Fremantle boomed due to a gold rush in the late 19th century and the city retains many lovely buildings from around this era, including a church, school and town hall. Adding further character to the streets are the bronze sculptures, many done by a local artist. The colourful Fremantle Markets set up on the weekend so I made another trip back a couple of weeks later to join the relaxed crowds browsing over the souvenirs, crafts and fresh produce.

← Best of the West → Wave Rock