I started off planting but soon learned how to drive the tractors and spent the majority of the time doing that. It was certainly the easier of the two jobs. The third part of the operation was driving the ute to refill the tractors with plants and fertiliser. They only had a range of about 1.5km so unless the rows were short they couldn’t make it back without this support. There's something about the air con and radio in the ute that made that job a popular one...

So while it wasn’t strenuous work, they were long 12-hour days. Sometimes we got lucky and didn’t have to work a full day because of the weather. Being the start of the wet season, Melville Island was receiving rain and thunder storms every day. The only question was whether the field we were working in would be hit. Light rain was okay – in fact in the tropical heat it was great! It lowered the temperature and eliminated the dust. Heavy rain meant a risk of vehicles (even the tractors) getting bogged in the mud and we had no choice but to stop work to avoid it happening. 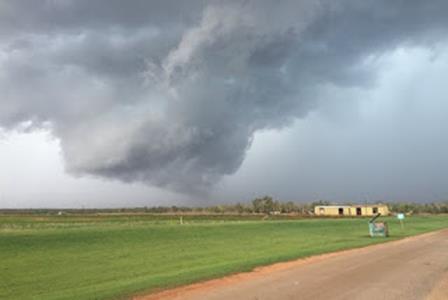 There are no sealed roads on Melville Island. They are all graded forestry roads so can turn muddy very quickly. One day a road near where we were working literally had a river flowing down one side of it. The ground was saturated from rain the day before and the water had nowhere else to go. The weather patterns on the island are very localised though. We finished two hours early one day because of the rain but because it was dry and sunny back at camp we were sent out to another field!

The forestry camp was adjacent to the unsealed airstrip and consisted of portable buildings arranged around the central office, kitchen and recreational room. I had my own room for the first time in months, complete with a wardrobe and writing desk. There were ablution blocks and two laundry rooms where overworked washing machines and dryers laboured with the dirty clothing of about 180 guys every night. Although it was a ‘dry’ island, there was a bar in the camp that was open for three hours each evening. 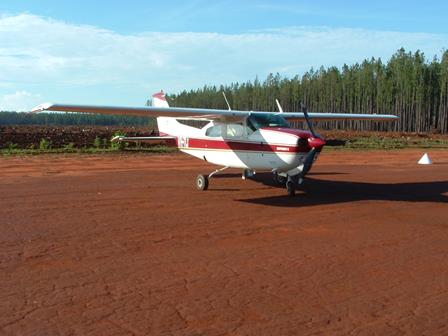 Plane on the island airstrip

For a poor backpacker, the camp food was great. Breakfast was either cooked or continental depending on your preference and lunch from the buffet consisted of cold meat, salads, bread, cake and fruit. Dinner was a variety of main dishes followed by dessert and every Sunday was barbeque night. Always the best night of the week for Mantova staff because the boss put $150 on the bar for us. Work hard, play hard.

So, together with the boys we settled into the groove. Work, eat, sleep; rinse and repeat. But they were all great guys to work with and we had some fun along the way. One day rain was threatening and Henry was complaining there was no toilet paper. He eventually decided he'd improvise and walked out into the bush. Very soon it was raining and I wondered where he was. It took a full five minutes for him to return and he was totally saturated. He had a look of disbelief on his face and he wasn't back long when he told me he had to go back and 'cover his tracks'. 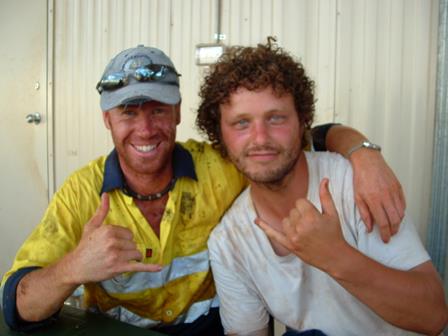 With Henry after work

When he returned dripping wet a second time I had to ask what he was doing out there! He told me he'd had a bit of a mishap. As he was squatting in the bushes he realised it was starting to rain. Not wanting to get wet he jumped up, slipped on the damp grass and fell back into his own excretion! His pants were around his ankles but he soiled is boxer shorts pretty bad. (Can you imagine this? I could hardly stand up for laughing so much!) When he went back to ‘cover his tracks’ it was actually to bury the boxers. I still smile now thinking about it. So funny...

← Kiwi on the Tiwi → Dusk till Dawn