Just a couple of hours south on a rattling old bus is the small and much more relaxed destination of Mamallapuram. It reminded me a little of Udaipur in the northern province of Rajasthan. As you wander past shops selling toilet paper, hand cleanser and used books listening to the mellow sounds of Jack Johnson you know that, once again, you have landed in the Kingdom of Backpackistan. But there are plenty of genuine reasons to visit. Mamallapuram was once a major seaport, a second capital to the Pallava kings and today is a World Heritage site for its great carvings and temples. 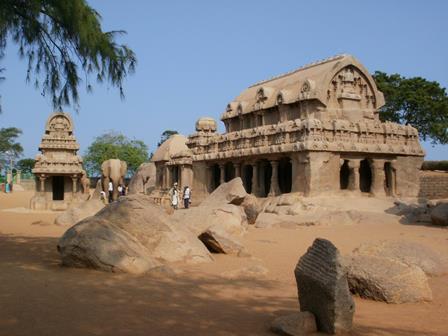 Perhaps the most impressive of these temples is the Five Rathas which, as the name would suggest, is five separate temples each carved from single pieces of rock. Each of these shrines represent chariots (ratha is Sanskrit for chariot) and were actually hidden under sand until discovered by the British 200 years ago. They are remarkable pieces of work considering everything is created from monoliths.

The Shore Temple is different in that it was created from individual blocks of stone and put together near the beach. Its location overlooking the ocean is one of majestic elegance and although it is constantly exposed to the wind and salt air it is enduring well. It is actually believed to be the last in a series of temples that extended along a since submerged coastline. 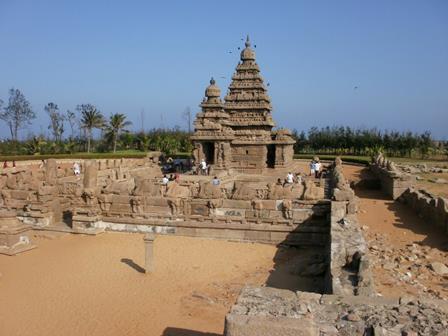 There are various other temples carved from monoliths around the town and an interesting highlight is the massive round rock that appears delicately balanced on the one below it. Some time ago, there were concerns that it could be unsteady and roll down the hill so seven elephants were brought in to see if it could be moved. Even with all this power, it didn’t move an inch so has been left in place for all to admire with a curious wonder.

If you are travelling southern India at this time of year there’s a reasonable chance of catching a festival of some description. In Mamallapuram I was fortunate to catch a large dance festival which was a wonderful slice of Indian art culture. For nearly three hours from sunset, I watched traditional dancing done to live music and singing. The dress was brilliantly colourful and the dance routines often appeared to be telling a story. I had no idea what the tales were but it was captivating to watch anyway. 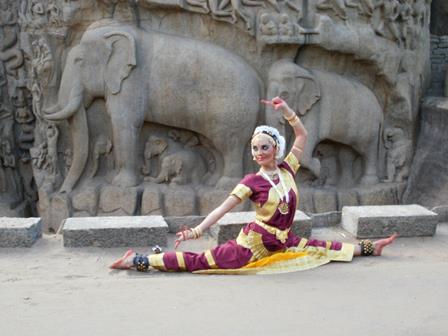 My next destination was the colonial city of Pondicherry. Originally settled by the French, it is a place of contrasts. On one hand you have the traffic noise, petrol fumes and general chaos of most Indian cities but if you can escape into the quieter leafy streets of the old French Quarter it has some genuine charm. These streets are characterised by lovely pastel coloured buildings with brown window shutters and wrought iron lamps hanging over doorways. A few streets are even cobbled which adds a greater sense of past glory.

I visited the Botanical Gardens which were established in 1826 by the French and to be perfectly honest I think they’ve been left to deteriorate ever since! They are quite honestly the most shambolic and untidy ‘botanical gardens’ I’ve ever visited. Weeds have overgrown crumbling walls and there were only glimpses of the flora that actually should be growing there. That aside, it was the middle of the day when the sun is always hot so a shady place to wander for a while was appreciated. 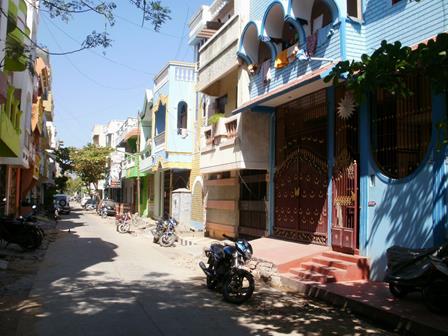 As expected, there is a sprinkling of attractive churches and a temple in the town. I visited the museum which was a rather random collection of French colonial furniture, pottery, coins and stone sculptures. Although Pondicherry is a seaside town it doesn’t have a beach. Instead, the ocean slurps into a seawall of jagged rocks but it is still a lovely walk in the late afternoon or early evening. Halfway along is a towering statue of Ghandi surrounded by a number of market stalls.