The journey continued in the ancient city of Madurai. This could perhaps be described as the soul of Tamil Nadu and is one of the oldest cities in the whole of India. Time has obviously brought with it many changes and the original aromas of saffron, sandalwood, musk and various other spices have long been overwhelmed by petrol fumes, dust and the pungent smell of urine if you walk too close to a large wall! But that aside, there are a few relics of this glorious past to visit today. 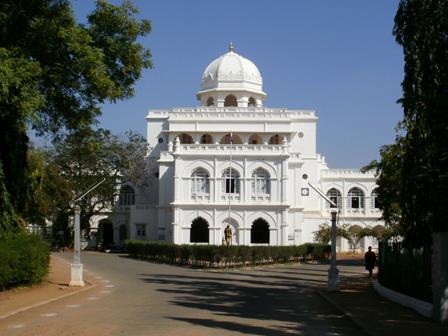 The first thing I did on arrival though was visit the Gandhi Museum. This was rather appropriate given that it was India’s Republic Day. Not to be confused with Independence Day, 26th January marks the day that the Indian constitution came into force. I’m not sure that it’s guiding principles of justice, liberty and equality for all has quite come to fruition but that is what is being celebrated anyway.

The museum itself chronicles the struggles of India to break free from Britain’s ‘oppressive’ rule and the key part the Gandhi played in achieving independence in 1947. There were a number of items belonging to Gandhi on display but the most important exhibit is the blood-stained loin cloth that he was wearing when killed on his way to a meeting the following year. 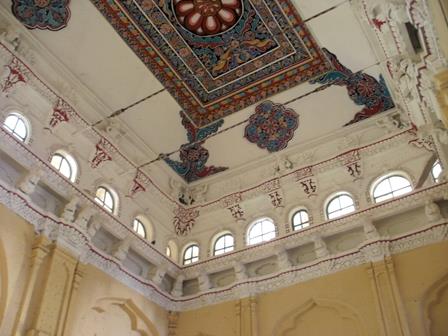 The ornate ceiling of Tirumalai Nayak

The Tirumalai Nayak, or what remains of it now, is an impressive place to visit. This Indo-Saracenic palace was built in 1636 by the ruler whose name it bears. Although time has taken its toll, you can still easily gain a sense of how opulent it must have been centuries ago. The huge central courtyard is adorned with faded yellow plasterwork, from which sculptures of lions and the makaras (mythical crocodile-elephant creatures) emerge. The adjacent music hall is similar and now houses a display of sculptures.

Sometimes when you travel you are just in the right place at the right time. And other times you are not. Unfortunately the Sri Meenakshi Temple in Madurai was one of those occasions. When I arrived, I was told that it was closed for an annual festival holiday. The only day of the whole year this happens! That was the bad news but there was some consolation in that another entrance was actually open that allowed access to a few areas. One of them was the Art Museum within the complex which was in a beautiful hall of 1000 carved stone pillars so I was satisfied with my visit.

That afternoon I took a bus down to Kanyakumari which is the end of the road if you are travelling south down this great land. It’s a pretty area of green rice paddy fields and rounded granite mountains that eventually gives way to a town that looks out to the merging of three seas. It’s a special place where you can watch the sunset over the rising moon but beyond that, it’s a friendly town that offers a nice respite from the dust of the Indian road. 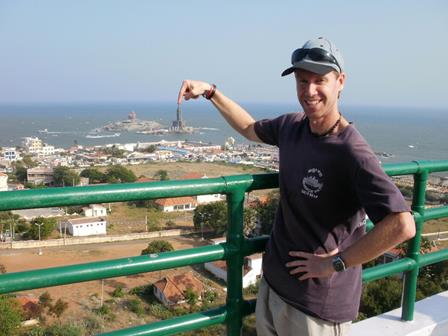 The most popular thing to do here is take a ferry out to the Vivekananda Memorial located on a large rock about 400 metres offshore. This was constructed in memory of the philosopher Swami Vivekananda (also known as the Wandering Monk) who came to meditate on the rock during his travels. There is a smaller island adjacent to the memorial that has a huge statue of Tamil poet Thiruvalluvar on it. It was crafted by over 5,000 sculptures and honours his 133-chapter greatest work – hence the height of exactly 133 feet.

There is a temple on the waterfront of the town which I found an odd place to visit because all men need to remove their shirts before entering. They also seemed to have a greed for money because there was an entry fee to see next to nothing and even then they attempted to charge more than what was correct. The nearby Gandhi Memorial was more interesting in that it contains a plinth which was used to store some of his ashes. Each year on his birthday (October 2nd) the suns’ rays fall through a small hole in the ceiling and fall directly on the stone. 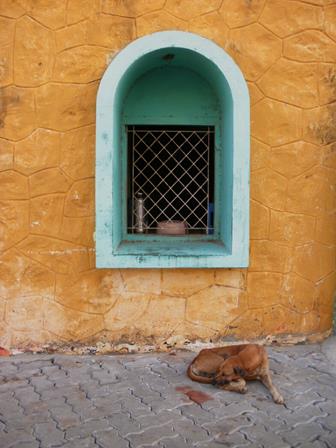 A break from the dusty road

I took a walk just out of town to the ‘Madam Tussauds’ of India. Okay…not really, but it was a wax museum and although it was rather tacky, it was worth the visit. There were 16 figures, mainly Indian politicians, actors and musicians but also a random collection of others including Michael Jackson, Jackie Chan, the Pope and Albert Einstein. It was as amusing as it was interesting and certainly something different! On the way back I went to the town lighthouse where I got a fantastic view from the top.

Watching the sunset and rising moon over three merging seas was a great way to finish my journey south. Tomorrow I’ll head north to the beach town of Varkala. It’ll be the first destination in the state of Kerala where more adventures await. One will be enjoying some boat travel in the beautiful backwater canals there. Another story for another time so until then...