About 140km southwest of Darwin is the delightful Litchfield National Park which offered a very enjoyable couple of days. Although the park is smaller than Kakadu, Lichfield has similar scenery and is actually rated better by many locals. Because of its smaller size, most commercial tours to Litchfield are only for a day so camping is easy. Also, there are no salt water crocodiles and you can swim virtually everywhere. It was hot and in two days I had eight very refreshing swims. Litchfield-do; Kaka-don’t! 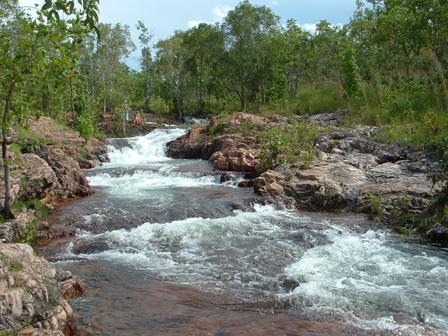 Again, without a 4WD our access to a few places was restricted but we still had plenty to enjoy on our little tour. The first place we went was the magnetic termite mounds. These were very interesting and the area looked similar to a graveyard. The mounds were grey and resembled headstones scattered out in front of us. The termites cleverly create these mounds so the broad faces are east and west. That way the sun warms the interior and keeps it at the optimum temperature for the colony living inside. 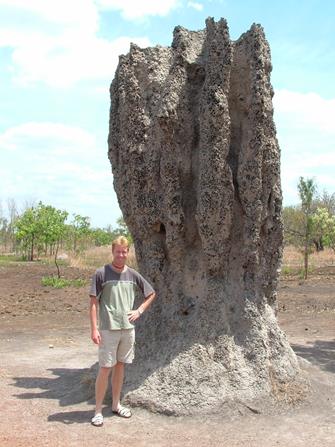 There were also a few of the huge cathedral termite mounds. These are quite different in appearance and colour. They are light brown and grow to over five metres in height. An amazing phenomenon when you remember the size of a tiny termite. True to their name, the shape could be described as a rather wobbly looking cathedral spire.

After that, we visited three waterfalls - Florence, Wangi and Tolmer. We camped at Wangi Falls with the campground being similar to those in Kakadu. The falls had plenty of water because they are spring fed. Florence has a couple of falls entering the picturesque and refreshing plunge pool below. Wangi has two also but one didn't have much water. The pretty Tolmer Falls was the only place we couldn't swim due to the fragile nature of the environment but there were some deep rock-pools not far away where we swam instead. 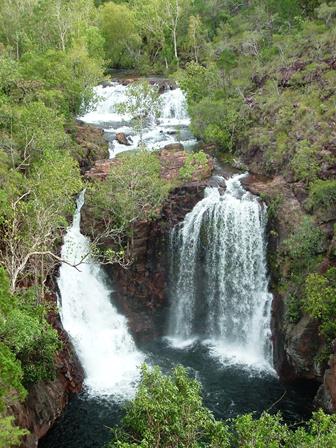 Compared to Kakadu there weren't many hiking tracks in Litchfield Park. I did a few short ones no more than a couple of kilometres. The best one went through an open area before coming back through a monsoon forest. It was interesting to note the temperature and humidity readings in both areas. It was 41C and 27% respectively in the open compared to 38C and 55% in the forest. Either way, I was happy we could swim!

I think the more time you spend in the national parks of the Northern Territory; the more you appreciate its scenic beauty and wildlife diversity. It has places that are sacred to the indigenous people but also rich in their culture and history. The unique climate offers a fascinating range of seasons and a huge variation in the appearance of the land. There's a vastness here that has to be experienced to be fully appreciated and I'm happy that I took the time to do it.