It’s funny the way distances can be deceiving. Somehow, I imagined that once we arrived at Alice Springs, Ayers Rock (Uluru), The Olgas and Kings Canyon would be within easy reach. It doesn’t look far on the map, but our exploration of these amazing places would mean another 1,500km of travel! It’d take three days but what a great three days it was!

Our travelling group was enlarged by one the night before we left after meeting a friend from Cairns at the hostel here. Travel offers these little quirks of fate and we were all happy to make space for her. There wasn't a lot to spare though because we only had an eight-seat car. However, with some careful packing we managed to fit the tents, sleeping bags, camping gear, food and the alcohol we needed and hit the road again.

For this trip our chariot was christened (I've been through the desert on a) 'Horse With No Name' and we arrived at Kings Canyon late afternoon. There are a couple of walks to do so we chose the shorter one that goes along the base to an area called the Garden of Eden. It's not as idyllic as it sounds but it had a large pool of water which was nicely shaded by the surrounding trees. The water wasn't exactly pristine but we enjoyed a swim anyway after a hot day travelling. 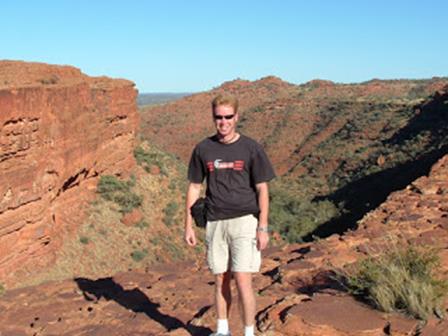 The next morning I did the 6km Canyon Rim Walk that firstly ascends and then follows around the edge of the canyon. It was spectacularly beautiful and many travellers rate it as a highlight of their trip to the area. The best views were at the far end where you can see right back to where the canyon opens. All along the track though there were fascinating rock formations and desert plants. It took about two hours to complete the circuit before joining the others and leaving for Uluru.

We stopped along the way to photograph a group of feral camels and it wasn’t long before a huge monolith appeared on the horizon. Our initial thought was that it must be Uluru but it had a unique table-topped shape that is different from the distinctive curves we’d all seen in photos. What we were actually looking at was Mount Connor and we received even better views of it from the lookout just before turning onto the Lasseter Highway. Once we made the turn the majestic Uluru was waiting and looming ever larger as we approached. 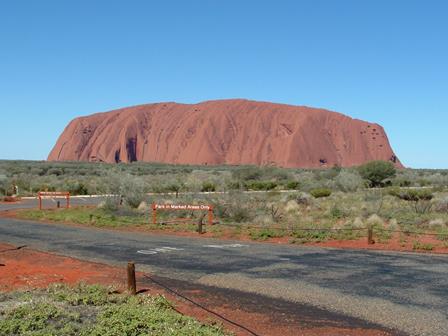 The imposing sight of Uluru

Uluru is undoubtedly an awesome sight. It has a powerful presence and I could see immediately why it is sacred and so revered by the traditional Aboriginal owners. Through the day, it seems to have different moods that are represented by its changing colours. The mid-afternoon sun had turned the rock a ochre-brown colour and for the boys it was our immediate mission to climb it. The girls decided it was either too challenging or preferred to abide by the plea not to climb out of cultural respect. 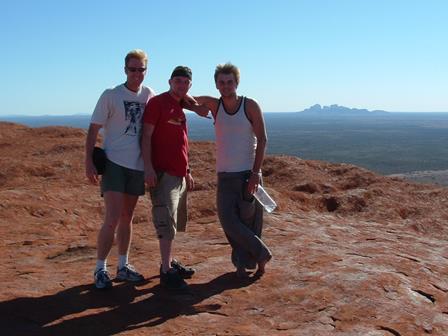 350 metres above the desert!

Personally, I thought the climb was an awesome experience and didn't feel any sense of being culturally disrespectful. The first part is very steep and requires the help of a chain to pull yourself up. Once that initial section was negotiated, it became easier as we continued on to the summit which is some 350m above the car park. There wasn't a cloud in the sky so we got amazing 360 degree views over the outback. In one direction was Mount Connor we'd seen earlier and in the other was the distinctive shape of The Olgas.

← Going West → Uluru and The Olgas