In a happy coincidence, I met up with Johannes who was another friend from Darwin. So I joined him and another guy for my trip to Perth. They were good company and Johannes was a model of German efficiency with his planning and organisation. We would often be up at 5.30am to get the most out of each day. A contrast to the leisurely journey I’d just had but I enjoyed it.

We wanted to camp our first night on Eighty Mile Beach on the north coast of WA, but the road into the camp ground was closed because of flooding. Apparently 93mm of rain fell the previous night! So we travelled a bit further down the highway and went into a nature reserve called Cape Keraulden. We had to negotiate some huge puddles along the road but virtually had the whole place to ourselves and ended up camping right on the beach. 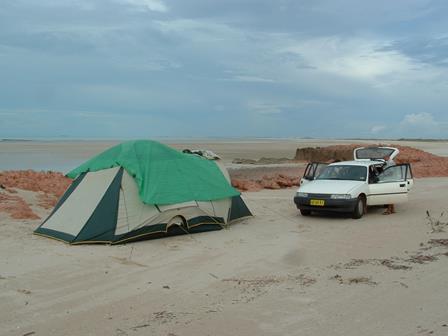 The following day we stopped at Port Hedland for food and fuel. In all honesty, that’s about the only thing that most tourists do here because it’s not the most attractive place. As the name would suggest, it’s a huge deep water port that services the Pilbara mining area. The harbour area is a skyline of railway yards, iron-ore stockpiles and huge ships. Through the dry season it can also be a dusty place and the wet season can bring with it tropical storms and even cyclones. We pushed on towards the beautiful Karijini National Park.

As we progressed that day, we were very concerned that the bearings or suspension were failing. Fortunately it was only the tyre giving up and it eventually punctured as we were entering the park. A quick change and we still had the tent up before dark. The tent was a huge thing that I could stand up in and best of all, it was waterproof! I could now relax and not have to worry about how the weather would affect my night’s sleep. 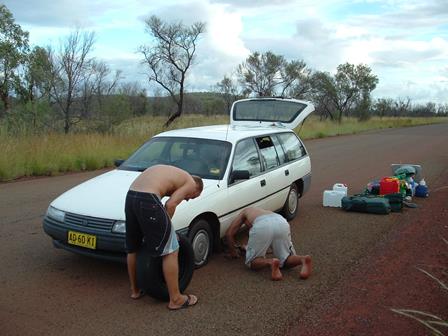 The whole next day was spent exploring the narrow breathtaking gorges and sculptured pools of Karijini National Park. We were fortunate to get a lovely day and had three swims in various places. The water was a bit cooler we expected but it was nice. Our favourite walk was probably Kalamina Gorge, although I loved the view from Oxer Lookout down into Junction Pool. It's here that four different gorges converge and it is described in my Lonely Planet as 'one of the great sights in Australia'. 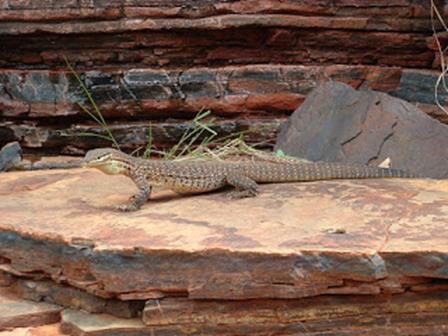 We had a thunderstorm that night but woke to a dry morning. Our main concern was that water already over the road had risen and we'd be stuck in the park for a day or two but there wasn't a problem. That day saw us complete the journey out to the coast again and to the town of Exmouth. I imagined an idyllic place on the end of the peninsula but it’s not really. Originally established as a naval communication base, the town now acts largely as a gateway to the Cape Range National Park and Ningaloo Reef which was our next destination.