Before leaving Adelaide, there was a final bucket list item to tick and just like when I was in Perth, it involved an island. This time, it was the aptly named Kangaroo Island which is acknowledged to be one of the best places in Australia to enjoy rugged coastal scenery and some untamed wilderness that is home to a virtual zoo of wildlife.

Most of the first day of my three-day tour was spent on the fertile Fleurieu Peninsula which is patterned with vineyards, olive groves and almond plantations. We visited a couple of wineries in what is known as the McLaren Vale Wine Region and I reacquainted myself with the divine tasting mead. Other wines, especially some of the reds are reputed to be superior to anything produced in the Barossa Valley. We shared a bottle over lunch at Victor Harbor (yes, that is the correct spelling) on what is known as the Encounter Coast.

Loaded and ready to go!

Just off-shore at Victor Harbor is the boulder-strewn Granite Island which is connected to the mainland by a causeway built in 1875. A popular tourist attraction is to ride the old horse-drawn tram out to the island where there is a penguin colony. Tours to see the penguins start at about the same time we were boarding the ferry from Cape Jervis. The 13km journey across Backstairs Passage took about 30 minutes so the sun was setting as we arrived at the town of Penneshaw on the island.

The second day took us to Seal Bay where we got up close and personal with some sea lions. We were under the close watch of a ranger but still allowed within about 15 metres of them. In the afternoon we climbed Prospect Hill which offered great views of Pelican Lagoon and out over Pennington Bay to the south. We finished our day a place called Little Sahara on the southern coast. As the name suggests, the huge sand dunes here that we surfed down on special boards offered some great fun. 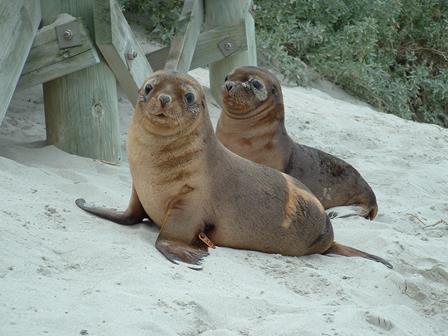 The third day was the best because we explored the Flinders Chase National Park at the western end of the island. The highlight and most photographed place on the island is the Remarkable Rocks. Out on an exposed promontory, these amazing rocks have been uniquely shaped by sea and wind. We also went to the impressive rock archway called Admiral's Arch near the remote lighthouse on Cape du Couedic. From the boardwalk we could see a colony of New Zealand fur seals lazing on the rocks below us. 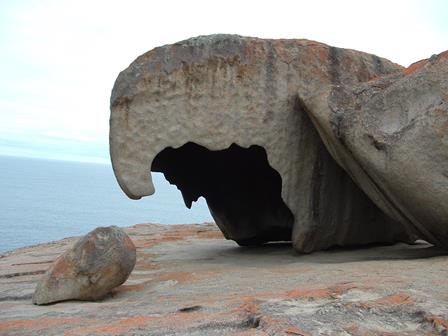 We had lunch at nearby Hansons Bay where I did a lovely bush walk before returning for our ferry. Near the picnic area here we watched as a koala descended one tree and then climbed another in front of us. It was exciting because they sleep about 19 hours a day! Apart from that, we saw at different times on the tour penguins, kangaroos, wallabies and an echidna all in their natural habitat. There were also various birds such as the wedge tail eagle and Cape Baron goose. 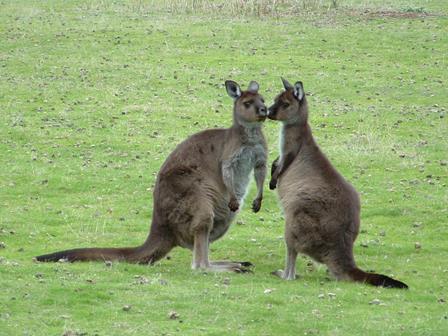 Because it was the winter season, our accommodation for the two nights was a hut and little farmhouse. During summer it's the more basic camping and sleeping in swags. We still had a big camp fire outside for cooking, making billy tea and roasting marshmallows. Telling stories and having a laugh around the campfire is always a memorable part of such as tour. The guide kept us amused with all kinds of tales and his stew was delicious. Good times and happy memories that I’d soon be taking with me to the warmer climes Queensland.