My second destination in Sri Lanka was the lovely city of Kandy which served as the capital of the last Sinhalese kingdom until it fell to the British in 1815. It is in what is referred to as the Hill Country and sits at about 500 metres above sea level. This makes the climate more comfortable and relaxed than Colombo. Kandy is set around a lake of the same name and spreads into the surrounding hills. If you can afford it, there are some nice places to stay with beautiful views. 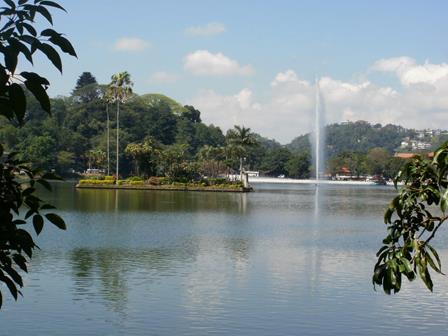 Walking around the lake and stopping to visit a Buddhist monastery along the way took about an hour after which I walked up a hill to the British Garrison Cemetery. This well-kept graveyard contains 163 graves and it was interesting reading some of the tombstones. Deaths in 19th century Sri Lanka were caused amongst other things by sunstroke, cholera, jungle fever and even an elephant. One gentleman survived the battle of Waterloo but later succumbed to mosquitoes.

The luck that deserted me in finding accommodation in Colombo thankfully returned in Kandy. I stayed at the Old Empire Hotel which actually has as much colonial charm as the name implies. It is also in a perfect location to visit the main attractions of the city. It’s adjacent to the National Museum, lake and the extraordinary Temple of the Sacred Tooth Relic. This is Sri Lanka’s most important Buddhist site and followers of the faith believe they must make at least one pilgrimage to the temple in their lifetime because worshipping here apparently improves karma immeasurably.

Understanding its importance requires some knowledge of its history. A tooth is said to have been snatched from the flames of the Buddha’s funeral pyre in 483 BC and smuggled into Sri Lanka sometime during the 4th century AD. It was moved around the country and even carried back to India by an invading army in 1283 but retrieved by the king of that era. The relic became so important that it grew to become a symbol of sovereignty. In other words, it was believed that whoever had custody of the tooth had the right to rule the island.

In the 16th century the Portuguese seized the tooth and with their devout Catholic passion, burnt it in Goa. Or so they thought. Apparently they had stolen a replica and the real tooth remained safe. The temple itself dates back to 1687 and was originally part of a royal palace, complete with a moat around it. In 1998 a section of the temple was badly damaged after a bomb blast and although this has been fully repaired security is tight and no-one enters without being thoroughly screened. 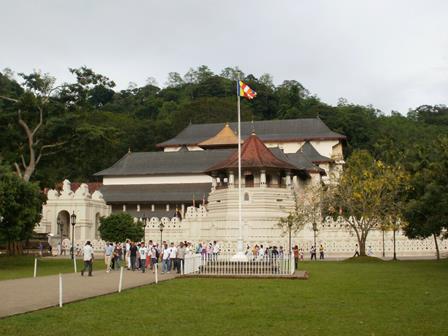 Temple of the Sacred Tooth Relic

I timed my visit to the temple to coincide with the evening puja (offering or prayer). It’s at this time that the well-guarded room housing the tooth is open to devotees and tourists. But here’s the thing: you never get to see the tooth. You join a long line and file past for a glimpse of a stupa-shaped gold casket draped in necklaces. Apparently the tooth is in that but there are rumours that the real tooth is hidden in a secret location and what is in the temple is only a replica!

I couldn’t help thinking about that as devotees poured into the temple with offerings of lotus flowers and prayers. People were almost climbing over each other to get a photo of the gold casket. Others were sitting around the walls in silent mediation. I presume for some of them it was the zenith of their spiritual lives and I wondered how they’d feel if it became evident they weren’t worshipping anything genuine. It would be like Milli Vanilli all over again!