It was a great little phase of my life and I made some enduring friendships but sadly I eventually had to pack up and prepare to leave Darwin. I’d already covered a lot of miles on my Australian travels but this would certainly be the longest leg of the journey: three weeks and 6,000km through the Northern Territory and Western Australia all the way to Perth. We’d be camping out along the way and it would be a heck of an adventure...

My travel buddy from Darwin to Broome was a girl from Germany and our car was a red Ford Falcon called Oma, which is German for grandmother. There was yellow duct tape holding the front bumper in place and I added a couple of strips of grey tape to the windscreen seals to prevent water dripping through. The engine was sound and tyres were good though. I was glad for that, especially when I found out we were travelling with no jack or wrench for the wheel nuts! 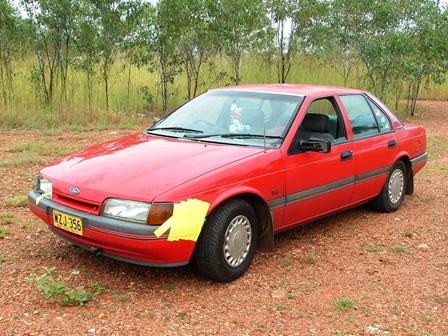 Held together by duct tape - Oma

Our planned midday departure from Darwin was eventually about 4pm and we arrived at Katherine Gorge after dark. Compared to when I was there in September, the campground was virtually deserted and it became obvious why on our second night there. After a lovely sunny day spent walking in the national park the rain arrived. My little tent was no match for the weather and it wasn’t too long before we began to get swamped! Most of the sleepless night was spent in the shelter of the camp kitchen playing cards while the rain hammered down outside. 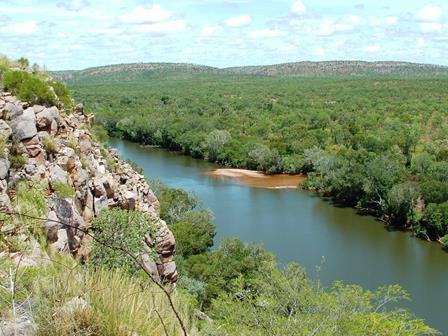 After we dried out wet sleeping bags and in Katherine, we headed west to the mighty Victoria River. The river had delayed our initial departure from Darwin because it had flooded to about seven metres over its usual flow. The sandstone cliffs where the highway crosses the river create a dramatic setting and it was easy to imagine the water raging under the bridge near the Victoria River Roadhouse. This roadhouse had a sign announcing that instead of being ‘under the management’ the owner was ‘under a new wife’! 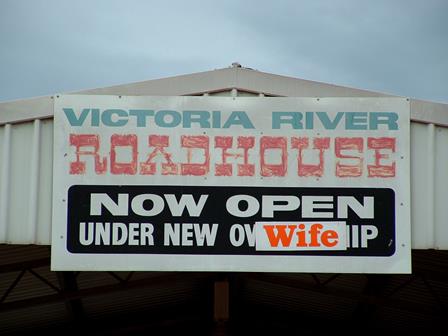 We ended up in a little place called Timber Creek – population 230 people. This is the only town between Katherine and Kunnunara. It has an interesting history for such a small place and is on the edge of the Gregory National Park but after our woes the previous night we were more interested in catching up on some lost sleep!

Before arriving in Kunnunara we had to negotiate the NT/WA border crossing. We were surprised and a little bemused how strictly this is controlled by the quarantine inspection station which demanded that we give up all our fruit, vegetables, nuts and honey. The irony of it was that if we were travelling the other way there are virtually no checks! In other words, Western Australia is paranoid and the Territory doesn’t really care! 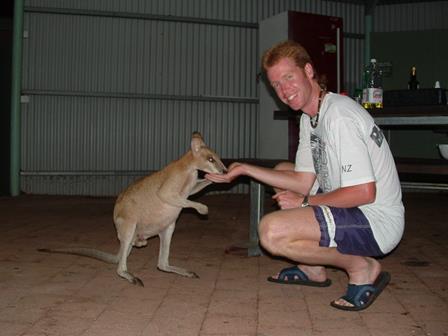 After having eating some things, declaring others and hiding a stash deep in the car boot we managed to nervously clear the border. After setting our watches back 90 minutes to WA time, we soon found ourselves in Kunnunara. It's a relaxed place set amid lush farmland and tropical fruit plantations and we decided to spend a couple of nights. As expected, it rained again while we were there but lessons had been well learnt and we put the tent under some shelter this time.

← Dusk till Dawn → Kununurra to Broome