I then did the short journey up the coast to the beach town of Hikkaduwa. Like Unawatuna, this long strip of beach has been exposed to uncontrolled development which has led to terrible erosion. What probably used to be palm trees has now given way to an almost unbroken string of guesthouses that compete to be the closest to the lapping waves. The unfortunate result is that in some parts the sand has almost completely disappeared. Some of the guesthouses are holding back the water with nothing more than sandbags and grim hope. 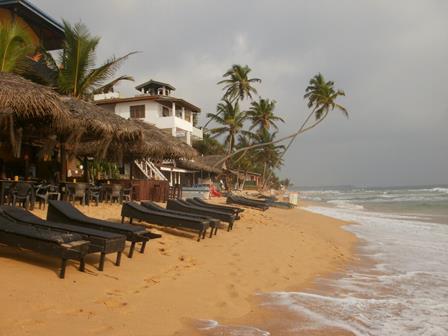 Hotels on the Hikkaduwa beach front

That being said though, in some places there are wide expanses of sand and it remains one of Sri Lanka’s most popular tourist destinations. The surf is good and there are always board riders out just waiting for the next perfect wave to ride. There is a coral sanctuary a few hundred metres from the shore which is popular with snorkelers and glass-bottom boats tours. It is also scuba diving season so there’s plenty to do apart from working on your tan. Away from the beach there is a temple to visit and a long line of souvenir shops and restaurants all vying for the tourist dollar. 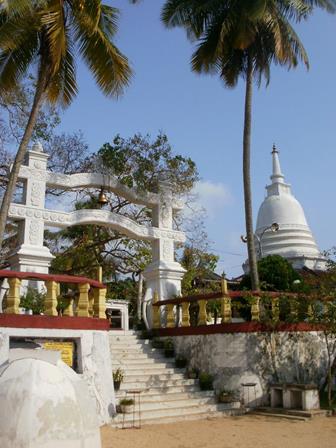 After 40 days of fairly intense travelling this was finally an opportunity to slow right down and enjoy my last couple of days in the subcontinent. I stayed at a nice little place right on the beach. Literally right on the beach… So time was spent relaxing, swimming and late in the afternoon playing some beach volleyball with the local boys. To compliment all that, the sunsets over the ocean here are beautiful and the evenings bring on a new atmosphere that isn’t there in the heat of the day.

Five hours travel up the coast after completing a transit through Colombo was my final destination of Negombo. This modest beach town receives a significant number of tourists simply because of location just 10km from the airport. For many it is the ideal place to either begin or end your Sri Lankan journey. That aside, it’s a historically interesting place and was at one stage one of the country’s most important sources of cinnamon. For the more natural-minded there is also a lagoon, canals and the beach. 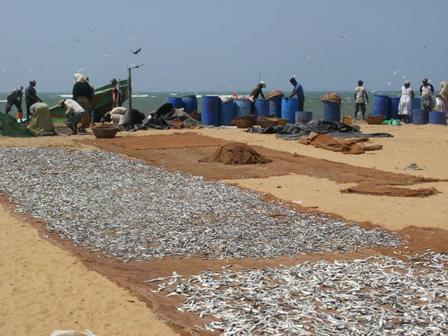 Fish drying in the sun at the local market

The Dutch captured the town from the Portuguese in 1640 and built a large fort to protect it. All the remains today is a crumbling wall and gateway with the date 1678 inscribed into it. The actual fort area is now the town’s prison which somehow doesn’t seem like the most appropriate use of such a notable place. Nearby is the bustling fish market which was a hive of activity, even though most of fish are sold early in the morning. It’s a smelly place and you have to watch your step in places but certainly worth the visit.

Also in the same area is a rather rundown place ironically called the New Guest House. Perhaps in 1958 it was new and in much better condition because it is where Queen Elizabeth II stayed during her visit to the town. Negombo is strongly influenced by Catholicism (the town is sometimes referred to as “Little Rome”) and is dotted with churches. The most impressive of these is St Mary’s with its beautiful stain glass windows and amazing paintings that cover the ceiling above the nave. 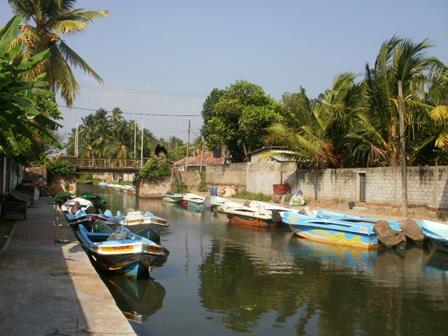 A couple of kilometres to the north of the town area is Negombo Beach. The Dutch showed their love of canals here like nowhere else in the country. In the surrounding area they extend distance of over 120km. I followed one of them toward the beach which was a pleasant walk. The beach itself…well, let’s just say it’s not that alluring. Rather polluted looking water whipped up by a strong breeze pounded into sand that wasn’t without some litter strewn along it. A few brave souls were in the water but only a few. And I wasn’t one of them.

I finished my day trip with a late afternoon stroll around the much prettier lagoon. It’s a good place for bird watching and also important for the local fishing industry. Most of the catches come from the open sea but the lagoon is renowned for its lobsters, prawns and crabs. As the sun dipped toward the horizon it brought an end to this extraordinary journey. As I imagined it’s one that has included many amazing sights, sounds, smells and tastes. With only the most rare exceptions, the people that I’ve encountered in both countries have been invariably warm, friendly, helpful and charming. 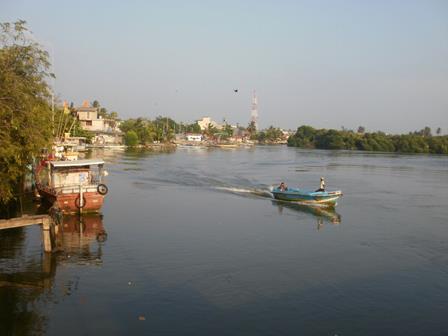 This is one of the reasons people love travelling the subcontinent and want to return again. When I was in Kandy I met a man from Denmark who told me that it’s the middle of winter back home. Days are gloomy and cold. As an escape, he’d come to Sri Lanka on holiday for the past three years. He told me it’s a country with centuries of rich history, a beautiful climate, diverse and very scenic landscapes, delicious food and lovely people. “Why would I want to be anywhere else?” he asked me. To that question, I couldn’t give him any answer. Why not indeed!

← Previous Adventure → Back to Alluring Adventures