My next destination was Haputale at the southern edge of the Hill Country. It would be my farewell to this beautiful part of Sri Lanka and I had a fabulous time there. It’s only an hour by bus from Ella so I had two full days in this largely Tamil town. It sits at 1,580 metres above sea level and clings to a narrow mountain ridge that falls away steeply on both sides. So it’s a spectacular location and on a clear day you can see all the way to the southern coast. That would be early morning before the swathes of mist roll in and swirl around the peaks. 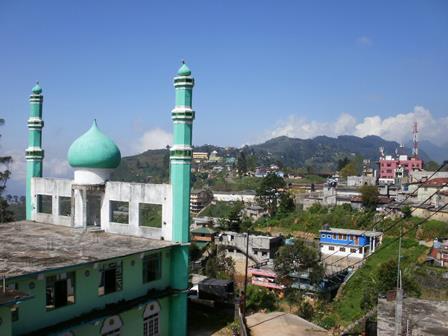 After visiting the pretty Anglican church and adjacent graveyard I jumped on the train (which was actually on time on this occasion!) and travelled one station 8km to the west. I hiked back along the railway line which hugs one side of the ridge and is a proud achievement of 19th century engineering. It was interesting that I had beautiful clear views into the valley to my left, while on the opposite side was thick with cloud and I could see virtually nothing. 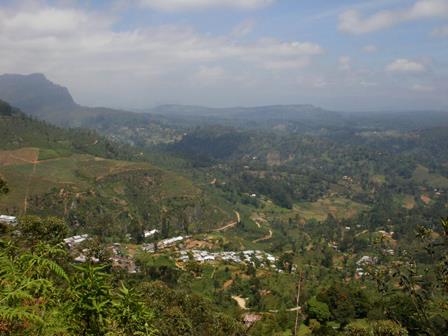 Views of the Hill Country

After a few kilometres I left that railway line and took a trail that led through the Tangamale Nature Reserve. This was a lovely hike that went through pockets of native bush. For a while all I could hear was birds chirping and the sound of a stream as it trickled its way down the mountain. It was a world away from the noise, hustle and pollution of the big cities so I appreciated the peaceful bliss while it lasted. It was then a pleasant 3km walk along a quiet road back to the town.

It was a day when things just fell into place because when I arrived at the station there was a bus leaving within minutes. This would take me 23km down the mountain to the magnificent Diyaluma Falls. At 171 metres, it is the third highest waterfall in Sri Lanka. Water seems to leap from the top of the escarpment and fall in one clear drop down the sheer rock face into the pool below. It’s a great sight from the road below but I didn’t stand admiring for too long because I wanted to do the 45 minute hike to the top. 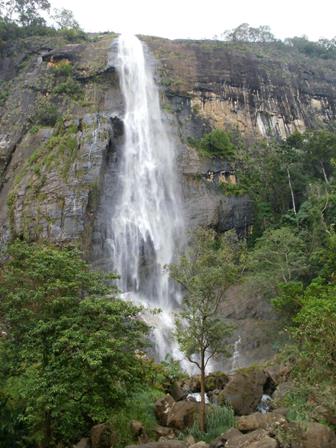 The track is a bit indistinct and steep in places but the rewards of getting up there are stunning views, beautiful rock pools and a few mini falls that lead to the top of the main fall. Although it was late afternoon I had enough time for a refreshing swim in one of the pools before sitting to admire the panorama of greenery below me. I could easily have stayed longer but I had to get down and pick up a bus before dark. It was 1¼ hours back up the mountain to Haputale.