The route known as B100 on a roadmap is better known as the Great Ocean Road and is one of the country’s most famous drives. From its eastern beginning in the city of Geelong, it takes travellers through seaside towns and pockets of rainforest on the way to the famous Twelve Apostles at Port Campbell. Along the way, the road enables an up close and personal experience with sheer limestone cliffs and the crashing surf of the Southern Ocean. I decided that the best way to experience this was to hire a car for the day which I did with a friend. 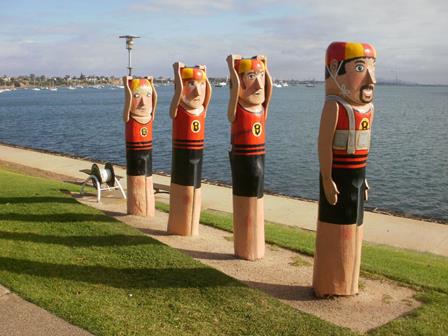 The bollards of Geelong

On what turned out to be a wonderful day, my only regret was that we didn’t start earlier in the morning. Either that, or do the journey over two days because there is just so much to see and do! Not to worry though because we crammed as much as we could into the daylight that we had. The adventure started with a walk along the Geelong waterfront to admire the colourful painted bollards. Each of these delightful icons almost seem to have their own unique character and little story to tell.

Just a short drive into, and arguably the beginning of the Great Ocean Road is the town of Torquay. Once a sleepy seaside town, it has now become the Australian surfing capital because of its close proximity to the world-famous Bells Beach. The fickle swell wasn’t really at its best as we passed through but it hadn’t stopped surfers getting out and hoping the long right-hander would give eventually them a great ride. I would have been happy to stay and watch but we had to keep going! 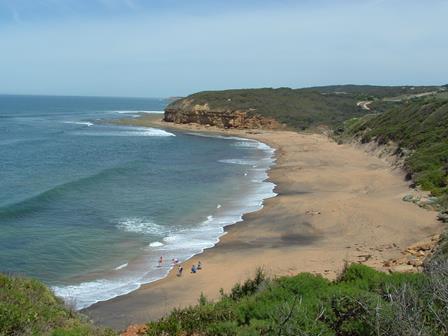 Surf's up at Bells Beach

Onward we travelled through the town of Anglesea and Aireys Inlet with its 34m-high Split Point Lighthouse. We stopped briefly to get a few photos and read a little about the history of the keeper’s cottages that were built there in 1891. With its tall gumtrees and gleaming Loutit Bay, the picturesque town of Lorne was the ideal place to break for lunch. The road from here through to Apollo Bay offers some of the best ocean views before deviating inland through the rainforest at Cape Otway.

It’s here that you can get unique views of the forest canopy from an elevated steel walkway which leads to a lookout tower. Unfortunately we had to speed past because time was pressing and Port Campbell was awaiting us. To get there we rejoined the coastline at the tiny town of Glenaire before returning inland and traversing the farmland of Lavers Hill. On an overcast or rainy day, this area can get seriously foggy but fortunately we had no such worries. The afternoon sun was glorious! 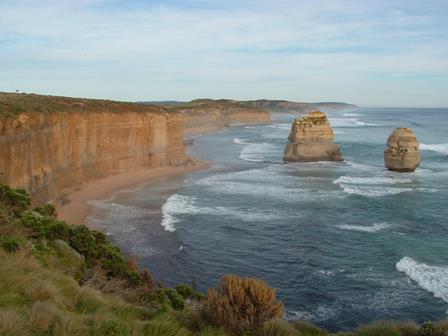 Port Campbell is a small, windswept in the National Park of the same name. It is home to the Twelve Apostles which is the most famous and photographed stretch of the entire Great Ocean Road. For thousands of years the winds, waves and tides have combined to erode and carve a fascinating series of limestone rock stacks, gorges, arches and blowholes. The Apostles themselves are huge rocky stacks that have been abandoned to the ocean by the retreating headland.

The interesting thing about the Twelve Apostles is that there aren’t actually twelve of them and there never have been. From the viewing platform it is possible to count seven and if you are in a boat or one of the helicopters that regularly buzz overhead you may count eleven of them. They were named ‘The Apostles’ because of their ability to attract tourists and the number twelve was added some time later. It’s a slowly evolving landscape. In 2005 a 70m stack collapsed into the sea and near the cliff base another one is gradually starting to form. 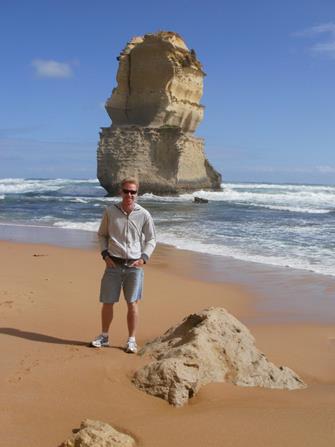 On the beach at Gibson Steps

Regardless of how many there are though, they make a spectacular sight. In the late afternoon sun we enjoyed amazing views from the lookout and also took the walk down Gibson Steps to the beach that affords a close view of one of the Apostle stacks. As the evening light was perhaps at its best we made it to Loch Ard Gorge named after a famous shipwreck and eventually to London Bridge. This rock formation was originally linked to the mainland by a natural bridge but collapsed in 1990 with terrified tourists stranded on the world’s newest island. They were eventually rescued by helicopter with an incredible story to tell!