The second day took us across to a place called Cloncurry which is famous for a couple of reasons. Firstly, is that it holds the record for the highest temperature ever recorded in Australia - 53.1C back in 1889. It's also the first place that a flying doctor flight departed from. We stayed just outside the town because the camper was completely self-sufficient and didn't need to be at a camp ground. The only thing we missed out on was not being able to use the TV/DVD player and microwave. 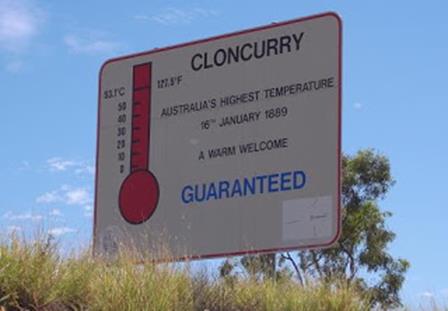 The morning of the third day I decided to leave before the van and run for an hour or so. By the time they filled up with fuel and water I’d run about 24km through the desert heat. Then I was the one that had to be filled with fuel and water! I enjoyed the experience and even had a group of about 20 cattle jogging along with me on the other side of the fence for a couple of kilometres. From where they picked me up, it was only a short drive to the mining town of Mount Isa. It’s best at sunset but we took in a quick panoramic view of the town from the City Lookout before pushing on.

We aimed to get to Three Ways for our third night. This is the aptly named point where the Barkly and Stuart Highways meet. From here, it's north to Darwin, south to Alice Springs and east back to Townsville. However, distances are vast and we ended up staying in a rest area about 150km short of our target. It gave us the opportunity through to enjoy a silent, starry night and a beautiful sunrise early the next morning. We then saddled up and started driving because it'd be a long day with nearly 700km to cover. 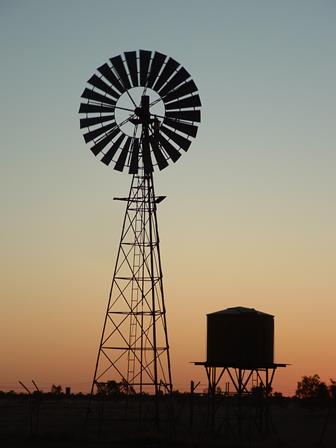 We had breakfast in the Northern Territory town of Tennant Creek which was established as a result of a small gold rush in the 1930’s. Today about half the population is of Aboriginal descent and it services a vast region of cattle stations and indigenous communities. Many travellers have little choice to stop here because it’s the only town between Katherine, 680km to the north and Alice Springs, 511km to the south. Convenient maybe, but it is also dusty and rather unattractive so we didn’t stay long. 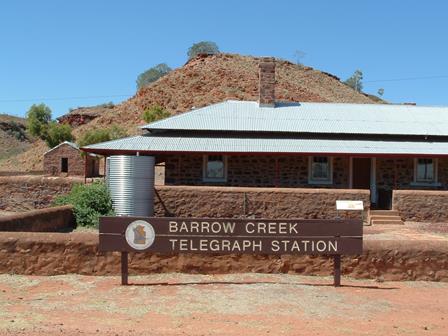 The landscape changed again down the Stuart Highway. At the Queensland/Northern Territory state line the land was flat and stretched as far as the eye could see. Closer to Alice Springs, the landscape became more undulating and the horizon was punctuated with brown hills and rocky outcrops. We stopped at Barrow Creek, which has a historic telegraph station and the most authentic outback pub you could imagine. We had a beer and enjoyed the local ambience for a while before continuing on our way. 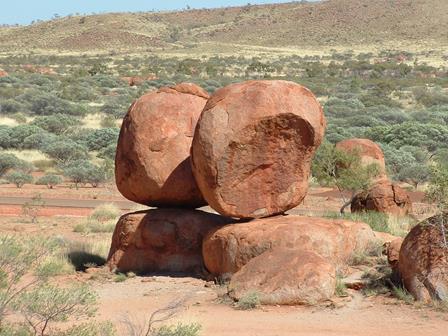 Our last stop before Alice Springs was at the gigantic and precariously balanced boulders called the Devils Marbles. For the Aboriginal people, they are known as Karlu Karlu and the rocks are believed to be from the Rainbow Serpent. The ‘marbles’ are actually the rounded remains for a granite layer that has eroded over aeons. Either way, the phenomenon of huge boulders seemingly balancing on each other is an extraordinary sight and we all enjoyed getting some photos before doing the final 400km down the road to our final destination.

← Into the Outback → Kings Canyon and Uluru