In the lovely little town of Ella it’s very convenient to ease back and not do a lot. But it also offers some fine walks which I did during the couple of days I spent there. The first of these follows a gently ascending road that goes through several tea plantations, some of which had pickers at work. The destination is Little Adam’s Peak which bears a striking resemblance to its larger namesake but only takes about ten minutes to reach the top from the road. 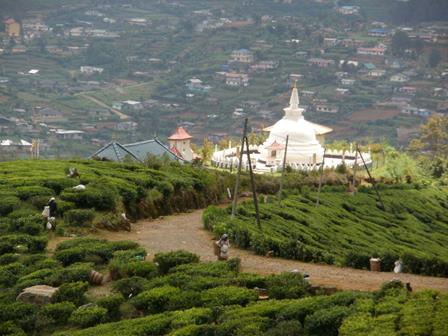 The top offered great a panorama of the surrounding area, including a view down the large valley known as Ella Gap. I sat for a while and watched vehicles snaking their way along a winding road far below me. In the other direction there was a tea factory. Like many others, it is a distinctively large corrugated iron building, four storeys tall. It sits at the top of a ridge in order to catch the breeze which helps dry the tea leaves that have been recently plucked (in the tea world apparently leaves are plucked rather than picked).

It’s interesting to note also that Sri Lanka only started growing tea in the colonial era. Until the 1860’s coffee was the predominant crop in this cool climate. It was only when a virus virtually decimated the entire coffee stock that the British turned to tea. Today Sri Lanka produces millions of tons of tea and is second only to India when it comes to exporting the product. Aside from the quantity though, Sri Lankan tea is award winning in its quality of flavour and body.

Top of the world! On Ella Rock.

Bright and early the second day I did the more strenuous hike up Ella Rock which is a higher viewpoint overlooking the valley on the opposite side. The first part of this route is a 2½ km walk along the railway line which seems to be a pathway many of the locals use. Never mind about any safety regulations relating to this because they don’t exist. It’s much in line with passengers being able to stand in doorways and hang out the windows as the train gathers speed. 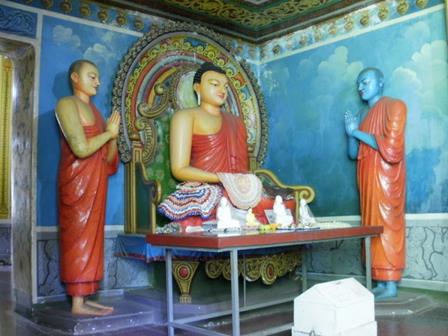 Inside the Dowa Temple cave shrine

From the heights of Ella Rock I returned to the town and took the descending road down to the Dowa Temple. This is a cave shrine that dates back centuries in one form or another. Today the internal walls are covered with beautiful Sri Lankan style Buddhist murals and there is a four metre high standing Buddha image carved into the rock face beside the temple. Altogether I’d walked about 16km that day but it was well worth the effort and very enjoyable. I did get the bus back to Ella though!

My travel in Sri Lanka was almost exclusively by bus. There’s something romantic about taking the train though and I thought I should do it at least once. So having a few hours to spare I decided to take an excursion to Badulla which is at the end of the line that begins in Colombo. The only problem was that almost everything I’d heard from other travellers about the rail system reflected an appalling record for timeliness and reliability. It was my turn to realise that yes, this is unfortunately true. 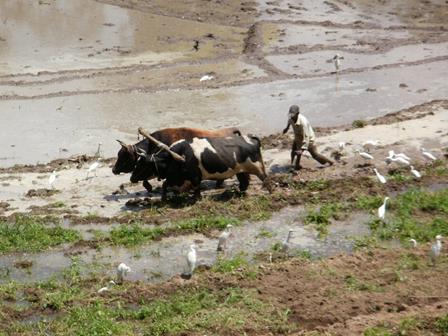 The train was scheduled to depart Ella at 3.07pm and initially I was told it was running 30 minutes late. I waited and was then informed it would be an hour late. I went and had a cup of tea and returned to find it was going to be between 90 minutes and 2 hours late. I waited till 4.40pm and gave up. Regrettably there simply wasn’t going to be enough daylight left to make it worthwhile. So I had the best of intentions but I guess some things just aren’t meant to be…